With so much competition on offer from a vast array of dedicated brands, launching your first ever loudspeaker is no easy feat. And after over forty years in the hifi business, that’s exactly what MOON by Simaudio has done.

Thankfully this is no ordinary loudspeaker, as Simaudio has poured its wider knowhow into offering a product with a difference to stand out from the crowd. And its stance is exactly the right element to kick off this review with, as so many loudspeaker brands tend to overlook the all too important element of how their speakers will be integrated into real world environments by their customers. 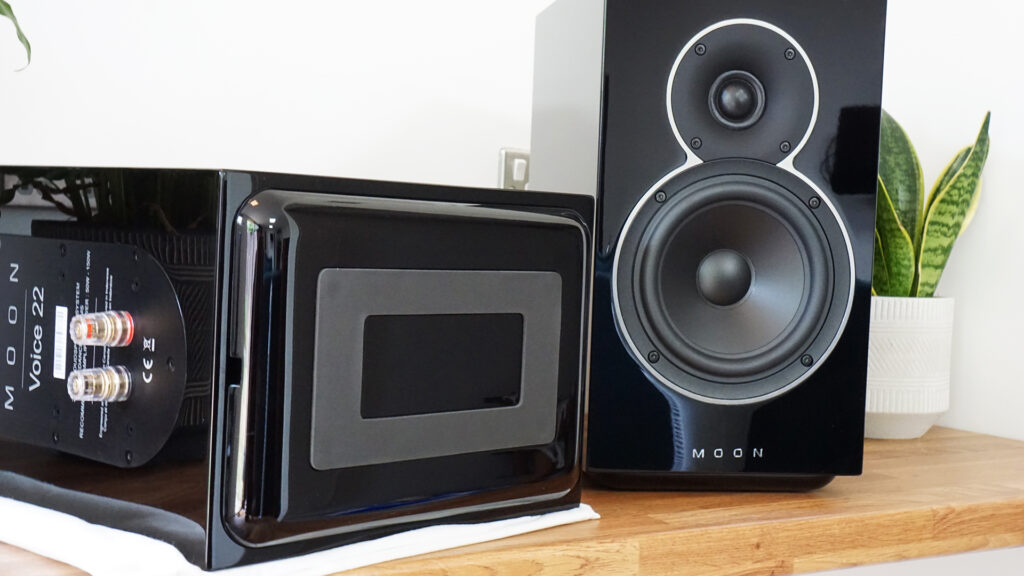 Left speaker laid on its side revealing its integrated hover base

As we all know, a standmount loudspeaker’s performance is highly dependant on its placement and coupling to whatever surface it’s placed upon. At best some manufacturers may include cheap pads as part of the package, in a bid to minimise vibration transfer while protecting a speaker’s lower surface from scratches and marks. At worst you may get some advice in the manual to help you find your own solution, which has led to an array of aftermarket products that bring with them varying degrees of improvement and visual compromises, including the excellent offerings from IsoAcoustics that we tested last year.

In designing the Voice 22, MOON has taken both considerations into account and done the thinking for you, thanks to its integrated ‘hover base’ approach, which is a magnetically attached curved baseplate formed from MDF with a soft padded mating surface made from Poron, that specialises in converting micro vibrations into heat. The hover base also also looks class, being of a slightly smaller footprint than the speaker’s 20x29cm dimensions, making the Voice 22 appear to ‘hover’ on any surface it sits upon. 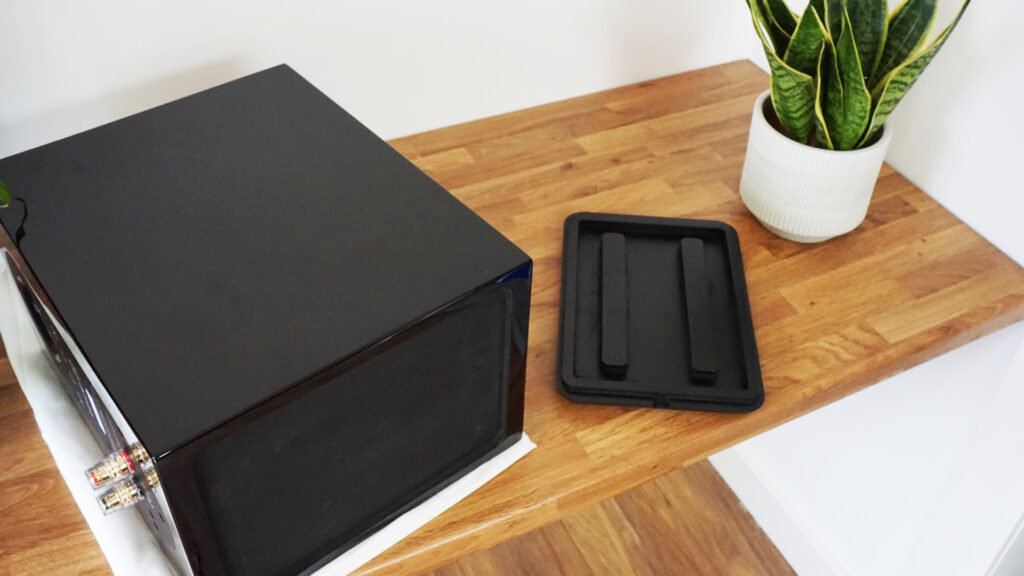 Elsewhere the rest of the speaker is equally well thought out. The tweeter is a 29mm soft dome type formed from a textile membrane sat within a large custom waveguide, that crosses over at 1.5kHz to a 155mm mid/bass woofer formed from a mineral-filled polypropylene membrane, supported by a cast aluminium basket. The crossover features a dual-layer PCB that hosts metalised polypropylene film capacitors and is designed for single speaker connections only.

Cabinet resonance has also been taken into account, with the Voice sporting MOON’s patent-pending CGD (Curved Groove Damping) to ensure ideal nulling of internal vibrations, which is borne out via their 10.5kg weight (each) and a quick knuckle test that returns a reassuringly dull sounding knock. 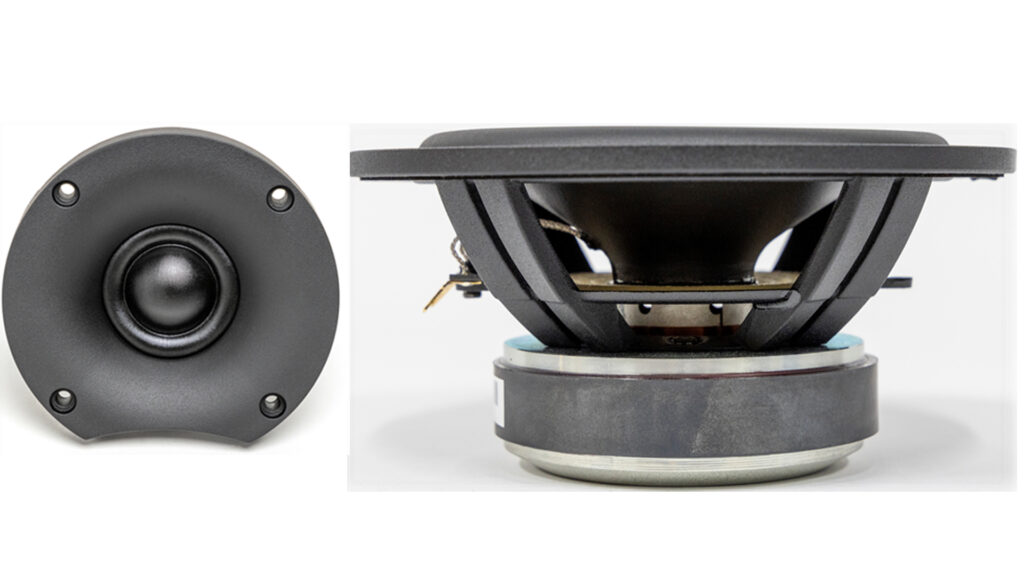 Custom made drive units (not to scale) include a 6in woofer and 1in tweeter with a waveguide that’s exclusive to the Voice 22, for ideal time alignment and controlled directivity

In their shimmering glossy finished flesh the Voice 22 speakers have a subtle retro edge to their modern look, with visible screw heads for holding the drive units in place and overlapping driver surrounds. Like their grilles, fingerprints are also drawn to their surface with magnetic attraction, hence having a polishing cloth nearby will keep them gleaming if you’re the touchy feely type.

Priced at £2,650 per pair (in either gloss white or black), customers can also opt for dedicated steel stands at £495 or buy the speakers as part of a system deal with MOON’s Ace all in one player at £5,700, which saves you £450 compared to buying them separately and has the added bonus of partnering the 22s with the kit they were designed to be married to. 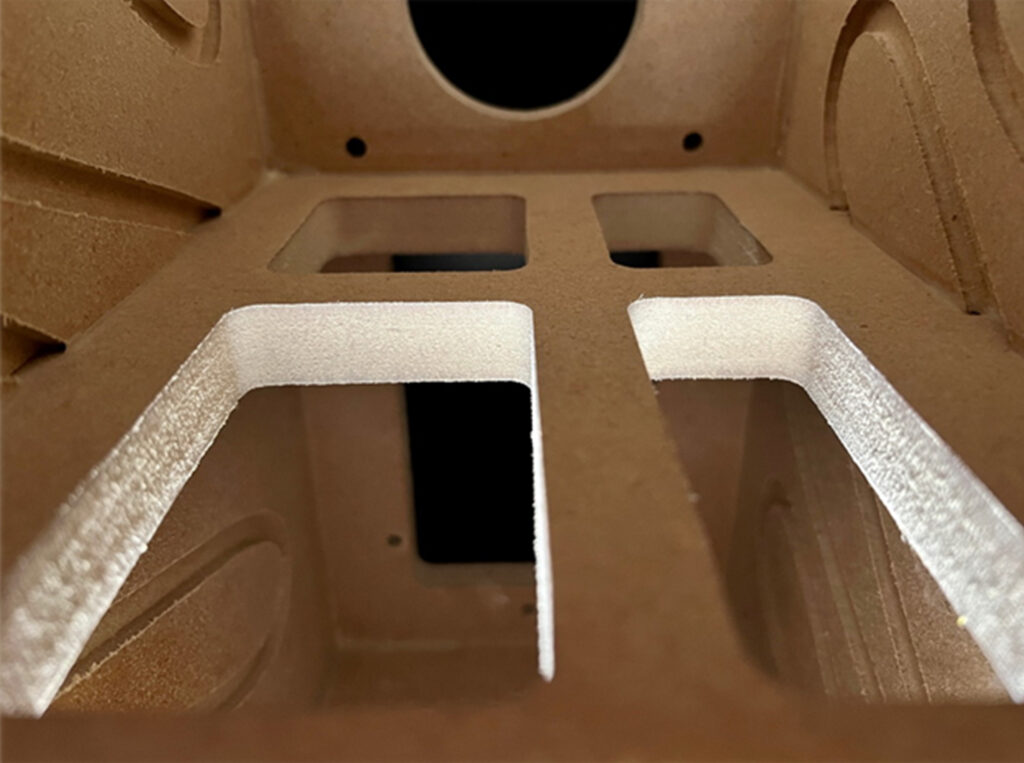 Inside the Voice 22 (looking to the rear of the speaker) shows internal bracing and asymmetrical CGD sculptured grooves, that are then filled with damping material to null internal resonances

Sitting atop dedicated stands with hover bases in place and after a healthy run in, the Voice 22s demonstrate what a well put together product they are. Streaming Olivia Vedder’s My Father’s Daughter from the Flag Day soundtrack at 24-bit/88kHz via Qobuz to my Primare NP30 streamer and Musical Fidelity M6 pre/power amps via Kimber 8PR cable is immediately arresting.

The way her vocals extend from the 22s’ cabinets to fill my 6.5×4.5m room with clarity is truly captivating, thanks to the precision and scale of the speakers’ delivery. The way they get under the skin of her tonality is also sublime, for example in how she subtly stretches her voice as she lifts her key when singing “hell” is beautifully rendered. What comes across here is how good the drivers are at integrating with each other, underlining how well the (relatively low) 1.5kHz crossover point has been executed. There’s no obvious ‘handover’ in the upper midrange like you get some some two-way designs, and this seamless nature combined with the speaker’s neutral presentation perhaps underlines the thinking behind the product name, as the way these speakers do vocals is exceptional.

And it’s not just their high and mid frequency delivery that’s notable, as their lower frequencies are just as praiseworthy. Positioned over 1.3 meters into my room and 1.5 meters apart with minimal toe in, this track’s lower bass notes are delivered with a nicely pronounced punch and sustained natural rumble to underpin the song’s harmonics, and this is in a room measuring almost 30sqm at modest listening levels. 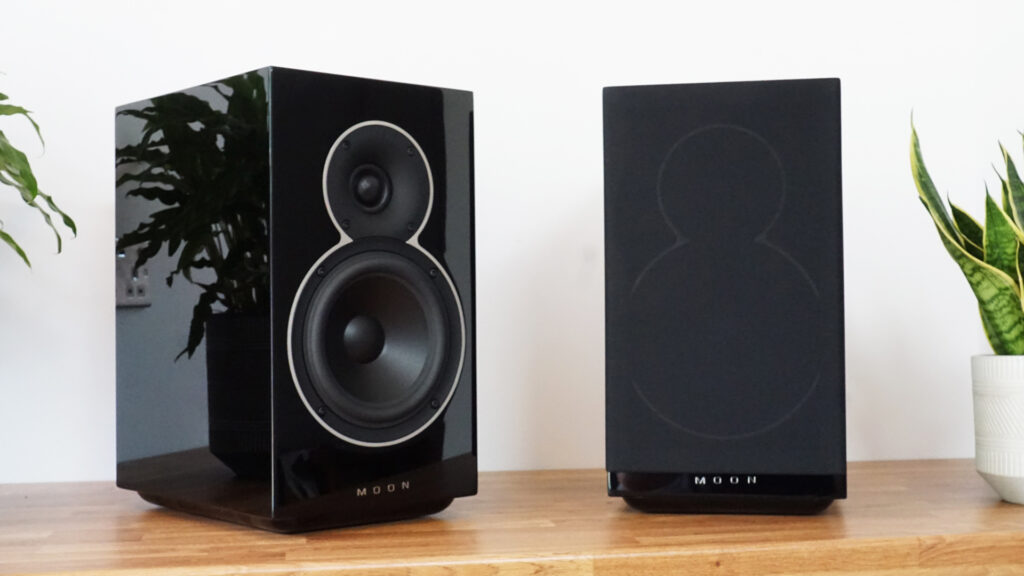 Ultimately though it’s how these elements combine that is the true measure of the 22, by conjuring a soundstage that is way beyond my expectations for a speaker of this size. Not only is it rich in scale (both in width and depth), it’s also also rich in quality with everything being given real body and separation in equal measure and no particular element, instrument or frequency being overly dominant. I’d expect this type of delivery from a class leading midsized floorstander in this price bracket, and for a standmount to be so well balanced while delivering on such a big stage is some achievement.

Serve them up the likes of The War On Drugs’ Thinking Of A Place at 24-bit/44kHz and you’re in for a treat right from the opening keyboard bars through to the looping guitar hook that sweeps across the listening plane with studio like finesse. Cranking up the levels simply delivers more of it, as the 22s seem to revel in being fed a healthy signal thanks to an easy to accommodate 89dB sensitivity and 6 ohm load.

While they can rock with the best of them at this price, their knack for delivering delicacy is also a measure of the finesse that MOON has brought to proceedings. With Bill Fay’s self titled 1970 LP gracing my VPI Scout 21‘s platter, the soft guitar notes on Gentle Willie are presented with an honesty that has me sensing how Fay relaxes his hand so that each chord strum has just the right amount of presence and warmth but without sounding too forthright. And when the building strings swell within the mix, despite their high frequencies there’s no sense of harshness or competing with Fay’s vocals, instead they’re afforded plenty of air and space to occupy, underpinning the relaxed nature of the track. 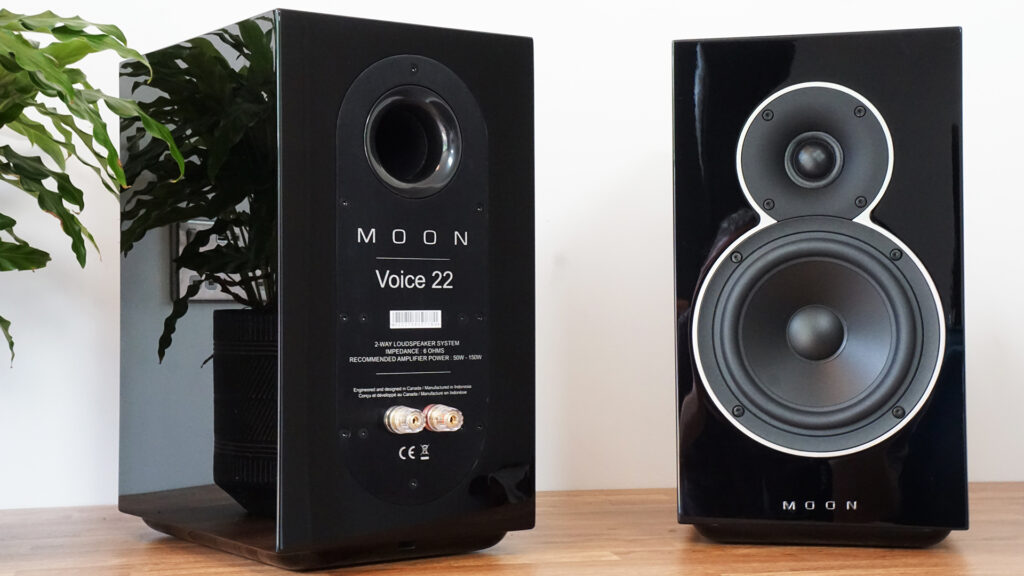 For an established brand to venture into highly crowded territory is a brave step. But thanks to what MOON has brought to the table, the Voice 22 is no ordinary standmount speaker. The hover base, clever internals and driver design all offer something different to set them apart from many rivals, but what really makes these speakers shine is their sonic abilities.

Vocals sound exceptional, and the scale, weight and delicacy that these speakers can muster shows what accomplished performers they are. In building a debut speaker Simaudio has shot for the moon, and the Voice 22 has made a welcome landing.

Ideal for… Those looking for a top quality standmount with plenty of versatility, and exceptional vocal delivery

Consider… Ease of placement is a real bonus. More available finishes (including wood) could make them even more appealing

Get all our MOON by Simaudio news and reviews

Explore MOON by Simaudio on Audiograde