In the world of hifi separate components, integrated amplifiers are rarely seen as the glamorous element of a hifi setup. Not nearly as eye-catching as a turntable or a pair of loudspeakers, amplifiers are the workhorse of the audio signal chain and a practical control hub for routing and selecting sources.

Take my resident Musical Fidelity M6 500i integrated amplifier, for example. It’s a powerful Class A/B design rated at 2x 500W into 8ohm, but it’s a 30kg heft of black, brushed alloy with massive heat sink fins down either side. Its bulk, oversized volume control and disproportionally small source select buttons don’t exactly make it easy on the eye. But despite its utilitarian looks and just four line-level analogue inputs, it’s the beating heart of my main hi-fi system. In fact, I’ve not found any other integrated that comes close to its musical abilities in handling such a wide range of loudspeakers and consistently delivering a big engaging sound. 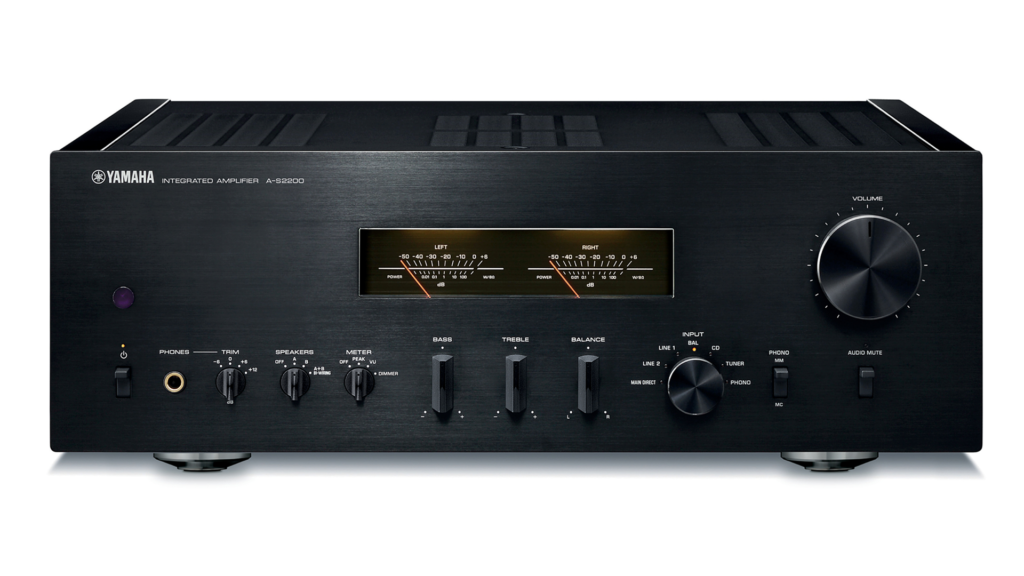 Priced at £2,999, Yamaha’s A-S2200 integrated amplifier is the opposite and a lesson in smart stylish design and well-thought-out functionality. Housed inside a remarkably eye-catching chassis, I think it’s safe to say that the Japanese corporate giant probably has deeper pockets than many other audio component makers when it comes to product development and design budgets. It has a reassuringly solid casework with gloss black side panels and the exceptionally well-crafted front panel is available in black (as reviewed) or silver finishes. It’s the middle of three fairly recent additions (announced September 2020) to the company’s now eleven-strong stereo integrated amplifier range. The new models are said to feature trickle down design techniques and technologies borne from the company’s flagship C-5000 preamplifier and M-5000 power amplifier designs priced around £4,500 each, and I’m keen to see how this mid-series design sounds as part of my regular setup.

Unlike many of today’s integrated amplifier designs offering digital connectivity, built-in DACs and wireless streaming capabilities such as Yamaha’s own series of networked MusicCast receivers, the A-S2200 is resolutely old-school with analogue connectivity options only. On the front panel, the source input selector switches between CD, Tuner, Balanced and two Line inputs (one of which also has a loop-through output). The Main Direct position fixes the level output and bypasses the Yamaha‘s preamp stages to make it operate as a stereo power amplifier, bringing future upgrade and system expansion possibilities.

A phono stage for all

One of the key features that makes the Yamaha stand out for me is the built-in phono stage that handles both moving-magnet and moving-coil cartridges. This really is a neat touch and although the MM and MC cartridge input parameters are factory-set, users can select between cartridge type via a flick of a selector switch on the front panel.

At the back, there’s a turntable earthing point along with the previously mentioned analogue-only input socketry. There are two pairs of pure brass speaker binding post labelled A and B for each channel – a rotary dial on the front allows users to select between A or B, or A+B speaker configurations. A 6.35mm headphone output jack is also on the front panel with a gain trim control ranging from -6dB to +12dB. 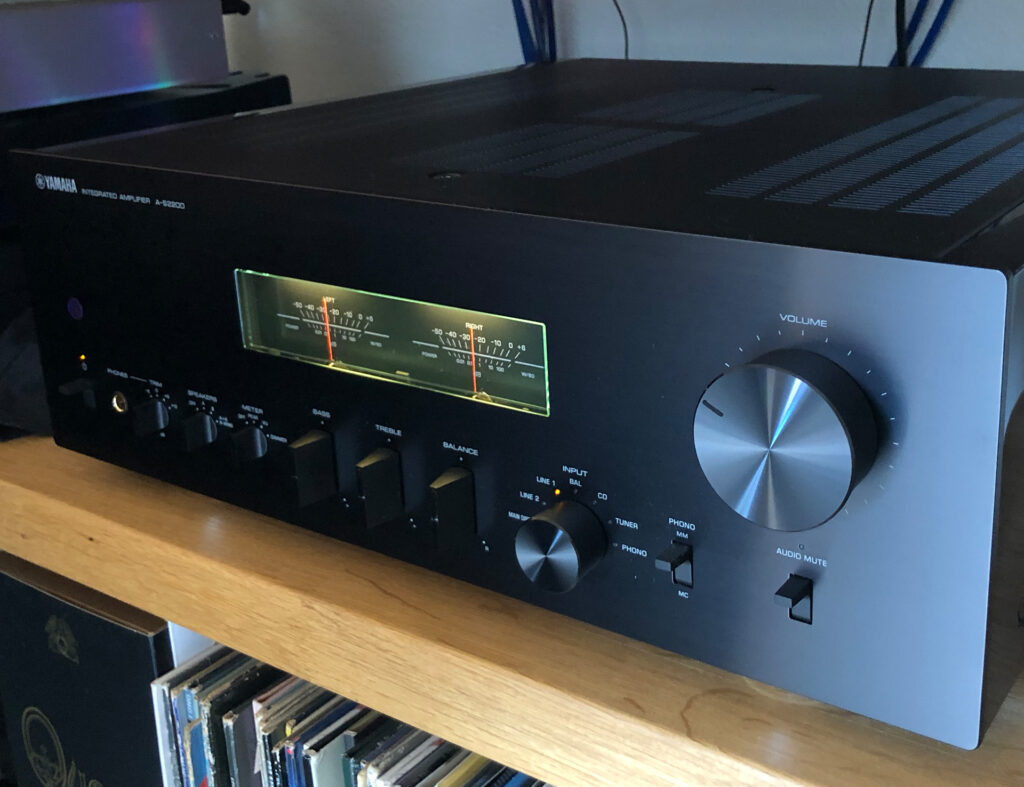 Bass and treble tone controls and left/right speaker balance complete the roster of fine-tuning facilities available to help integrate the amplifier into your surroundings and sonic tastes. An Audio Mute switch reduces the output volume by 20dB and the nicely weighted rotary volume control is motorised and controlled by the supplied handset. A selectable Auto Power Standby mode turns the unit off after eight hours without use.

Who doesn’t love an old-school power meter? With the music cranked up, undoubtedly the most eye-catching element of the A-S2200 is the backlit left and right channel power meters at the centre of the front panel. They’re a bit of a throwback to the heritage styling of hi-fi brands of the seventies and early eighties when they were almost an essential part of how separate components looked, and Yamaha has expertly captured the yesteryear feel and retro trend. The meters serve no real purpose, however, other than the mesmerising effect of watching the needles move to the output signal and encouraging me to increase the volume level to make the meters dance more vigorously almost every time I pass by. There’s a choice of VU (Volume Unit) and Peak level settings. A dimmer option allows you to select the appropriate level of backlighting to suit your mood. 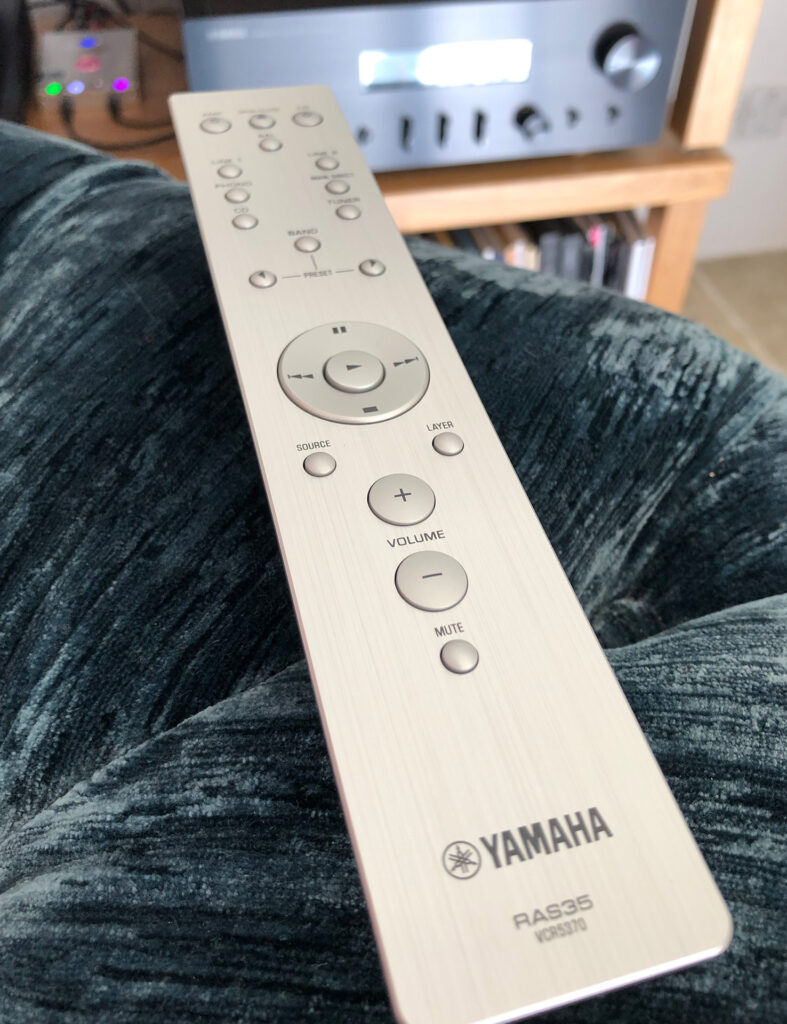 Weighing around 23kg and measuring 435 x 157 x 463mm (WxHxD), the Yamaha is considerably easier to manoeuvre into position and connect up sources than my brutish resident amplifier. Its output power rating isn’t quite as muscular at 2x 90W into 8ohm, but it’s ample enough for most situations and manages to drive my Dynaudio X38 floorstanding speakers connected via Chord Company’s Rumour loudspeaker cable with apparent ease.

As a fairly rarefied facility on hi-fi amplifiers at this price point, I have an almost overwhelming desire to tweak the tone controls simply because of their presence on the front panel and to appreciate the effect on the balance of the A-S2200’s sound. While they’re definitely useful for anyone wanting to contour the sound, I find there’s absolutely no need to adjust the controls beyond their centralised ident positions, which bypasses the tone control circuitry.

The A-S2200 delivers a sound that’s punchy and full of gusto. It sounds bigger with a firmer grip on the Dynaudio speakers than I anticipated given the slightly lower power output rating compared with my system’s usual amplifier and just goes to demonstrate that it’s not always about more watts.

Bass is strong and forthright without being over bloated. Alphaville’s Big in Japan via Qobuz using Auralic’s Altair streaming DAC seems to turn back time and this 24-bit/44.1kHz version sounds so much better than I remember. There’s an impressive amount of bass depth given the track’s original era recording and enough treble detail and openness to highlight the attention lavished on the remastering. It sounds smooth and never strays into harshness, even at higher volume levels as I seem determined to push the power meter needles ever higher to get things really jumping. 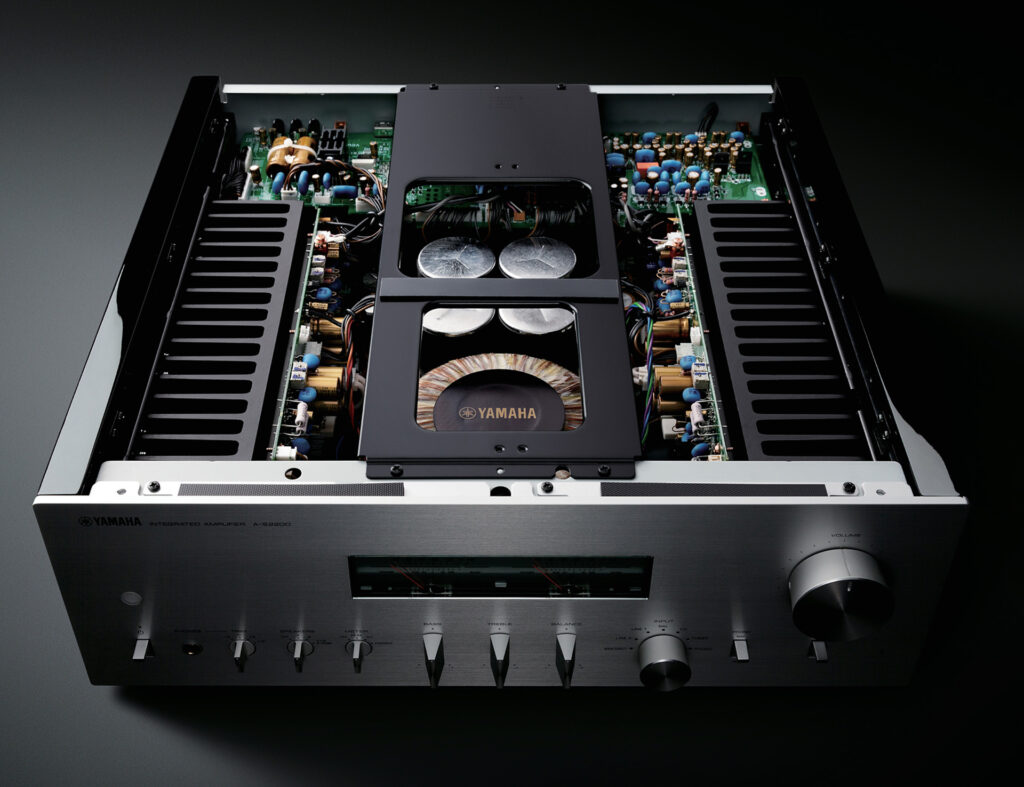 The A-S2200 has an open soundstage that enables me to hear into the layers of a recording with a firm impression of the acoustic space and instrument placement. Playing a selection of CD-quality classical pieces including Henry Purcell’s Dido’s Lament performed by the Bournemouth Symphony Orchestra and Motzart’s hugely dynamic Requiem in D Minor K. 626: III Sequentia Dies Irae played by the Radio Symphony Orchestra Ljubljana, the Yamaha sets the orchestra out in front of me with a big and expansive sound. With the Mozart piece there’s no hint of strain or sign of it buckling under pressure during the huge choral vocals, and the Yamaha can clearly handle dynamic swings with ease.

Playing a 24-bit/96kHz version of Nils Frahm’s Some has bags of atmosphere but perhaps the soundstage doesn’t stretch as far back beyond the plane of the speakers to give a sense of the large acoustic space as I am used to.

As a proponent of standalone phono stages to delicately handle the tiny audio signals from a turntable and often incorporating flexible parameter adjustments, the A-S2200’s built-in MM/MC phono stage is a credit to the designer. Although there are no user-adjustable settings, it doesn’t make any sonic compromises when it comes to the handling of the minute audio signal output generated by a cartridge and there’s no background hum.

I’ve often found that Japanese hi-fi brands have a shared philosophy when it comes to getting to the rhythm, speed and detail of a piece of music. At around the same price as the Yamaha integrated, my Technics SL-1200G direct-drive deck seems perfectly matched to the A-S2200’s capabilities and I’d describe its sonic characteristics in much the same way. It’s fitted with Goldring’s Legacy moving-coil cartridge – a design that’s also not shy of digging out the rhythm and detail from a record groove. As I plough through all four sides of Daft Punk’s Random Access Memories album one afternoon, the Yamaha showcases the rhythm and pace of the album’s go-to tracks Lose Yourself to Dance and Get Lucky, and serves them up with enough funk to get the power meters really jumping and the household on its feet.

The Yamaha A-S2200 is a well-specified analogue amplifier with sensational sonics. It’s an exceptionally well-thought-out design with audio signal integrity in mind and built to the highest standards. Musically, it’s one of the most enjoyable integrated amplifiers I’ve heard in recent times and the combination of cost-effective design and solid performance make it a very attractive option indeed. 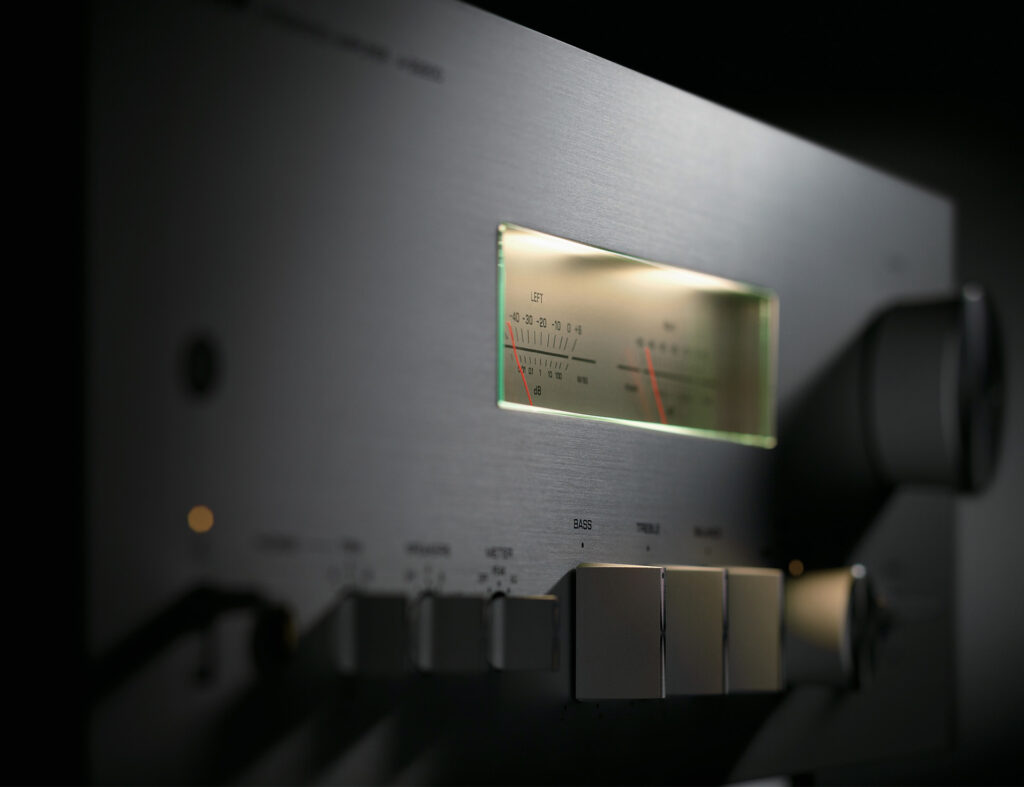 Power meter backlighting can be adjusted to suit your mood

Ideal for… Those looking for a modern amp with plenty of features with gorgeous retro styling.

Consider… If the soundstage is deep enough for your system, room and tastes.

Get all our Yamaha news and reviews