There are many hifi manufacturers with backgrounds in pro audio who unashamedly shout about their heritage from the rooftops, but not ATC (or the Acoustic Transducer Company to be precise). Instead, despite its respected professional roots, this Gloucestershire based company prefers to channel its energy into what it does best, using decades of knowhow to build an uncompromising range of active and passive loudspeakers and, in more recent years, accompanying electronics.

Priced at £2,495, the SIA2-100 amplifier under review here is the cheaper of two integrated amps ATC offers, which sit below its more pricey pre, power and dual mono separates. It’s also the brand’s most well specced amp, meaning more bang for your buck, and is designed to partner the company’s matching CD2 compact disc player (£1,750), which shares similar sized casework. 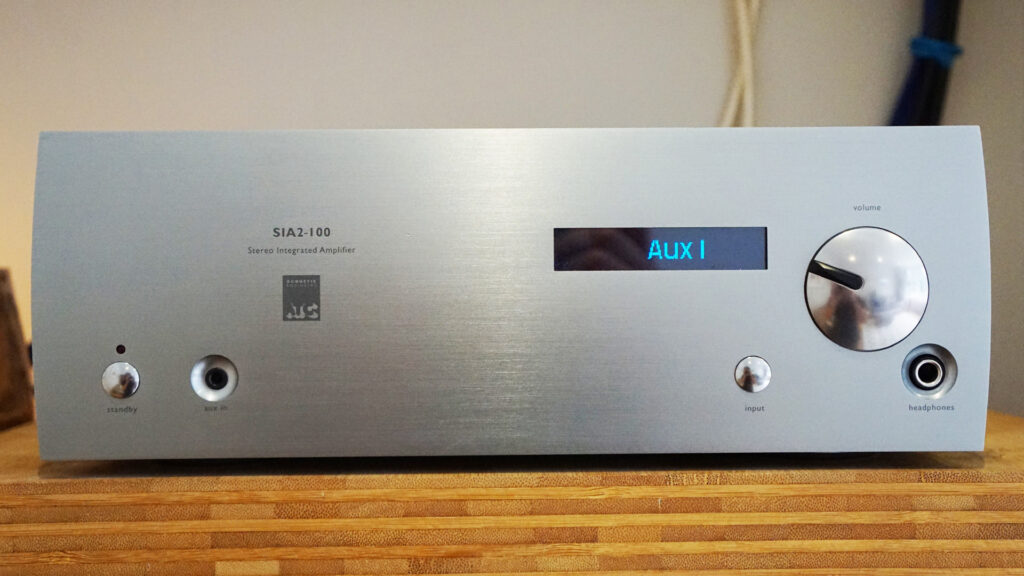 Just a trio of controls for power, source and volume plus an LED screen keep the ATC’s front panel pure and simple. Headphone jack and analogue input are practical extras

That’s not to say there’s any compromise in the SIA2-100’s quality given where it sits within ATC’s range. Unboxing this relatively diminutive amp and its 113x315x342mm (HDW) size combined with 9kg heft tells you there’s a lot of well made physical hardware within its compact casework. From the elegantly arranged top panel vents to the front panel’s solid and curved faceplate, everything about this amp feels understated quality in a typically British way, that’s reminiscent of SME’s approach to turntables. Even the front panel’s finely printed small-scale lettering is designed to do the job, without drawing too much attention to itself.

All that you want

Inputs wise this amp is very well and sensibly served, making sure all bases are covered for most music fans. The rear panel offers two sets of line-level (RCA) analogue inputs alongside optical (TOSLINK), coaxial (S/PDIF) and USB (Type B) digital sockets. The latter three are handled via an AKM 32-bit DAC chip, with the USB input catering for PCM signals up to 384kHz and native DSD256 for PC and DSD128 for Mac. The amp’s front panel also sports a 3.5mm auxiliary socket for hooking up analogue inputs in a hurry and a 6.35mm headphone jack to keep partners and neighbours happy.

Outputs wise the single sets of multi-way speaker binding posts are well made, but with my heavy duty cables and spade connectors, extra care is needed to ensure there are no accidental shorts and having these sockets spaced further apart would have eased my mind further. Thanks to a set of pre-out sockets, there’s also an option to add a power amp too should you want more grunt, so you can use the SIA2-100 to build a bigger system around longer term. 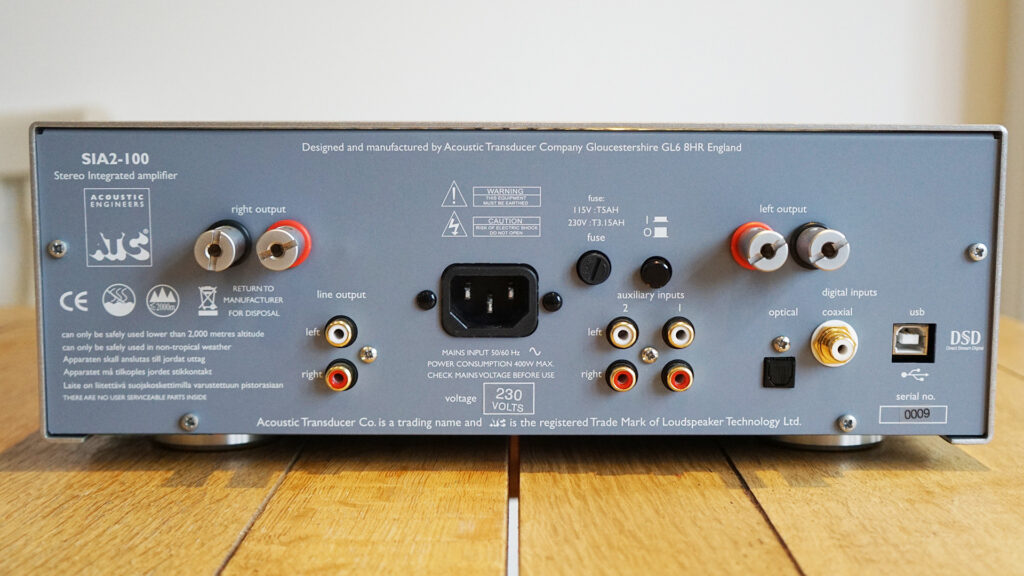 Speaker matching shouldn’t be an issue thanks to the SIA2-100’s claimed 100W per channel output, which is based around a Class AB discrete MOSFET design drawn from ATC’s higher-end active loudspeakers, with two pairs of transistors per side.

Getting this amp singing is refreshingly easy. Once hooked up and with the rear panel’s power button depressed, the SIA2-100’s front panel LED window tells you someone’s home. The source selector lets you scroll through each named input which appear on the backlit LED screen in quick succession. You can also dim the display using the supplied ATC remote should you wish. Via the supplied remote, the SIA2-100’s large volume dial is fantastically responsive, making my reference Musical Fidelity M6 preamp seem frankly lethargic in comparison.

And lethargy is not a term you’d apply to this amp’s sonic performance. Feeding it a 24-bit/96kHz file of Nirvana’s Lounge Act from the band’s era-defining Nevermind album via my windows laptop running JRiver into the ATC’s USB socket, gets to the heart of what this amp does best. Butch Vig’s production is laid bare with effortless transparency, highlighting his clean but not overly polished studio wizardry, which helped this album transcend the underground to mainstream without being perceived as ‘selling-out’.

Putting this hi-res version through its paces really underlines the quality of the DAC nestled within the SIA2-100, allowing the amp to get out of the way and let the music do the talking by presenting it through an honest and uncoloured musical window. Krist Novoselic’s opening bass line sounds fast, textured and buoyant, with the amp driving my Dynaudio Focus 260 loudspeakers to set the scene for Kurt Cobain’s visceral lead guitar chords, as they cut through the air, taking no prisoners. This track also highlights how well the ATC handles dynamic swings, with the song’s pace and energy never sounding anything other than full-throttle throughout. 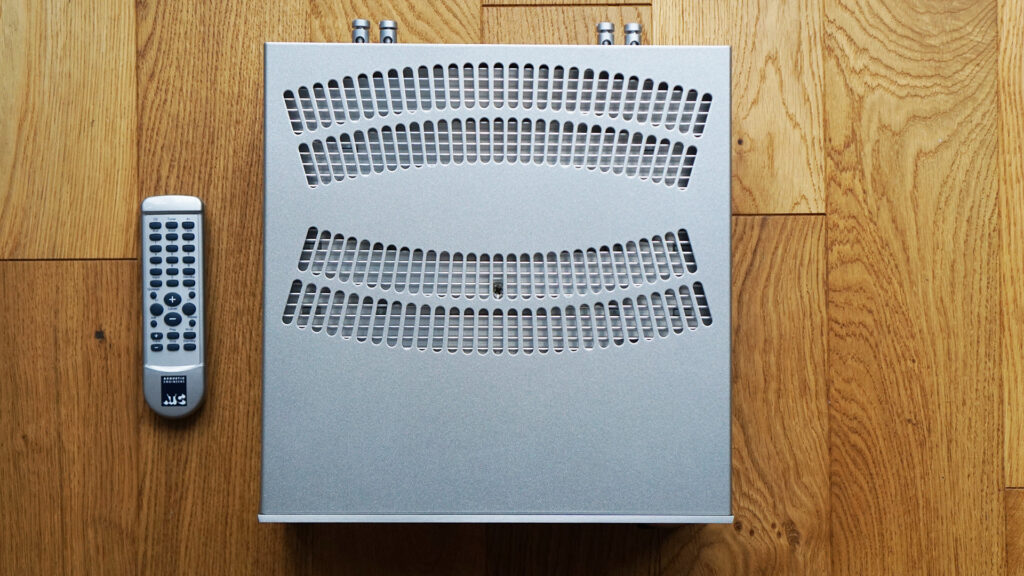 Stylish air vents aren’t just for show as the SIA2-100 holds a healthy temperature when in use. Functional remote also serves ATC’s CD2

Clarity and detail are also high on this amp’s agenda. Streaming Billie Eilish’s Bury a Friend via Tidal at 16-bit/44kHz (CD quality) and the SIA2-100 presents each sound effect exactly as they should be heard, neither too buried in the mix nor brought too much to the fore. Instead the ATC applies just the right amount of focus, allowing each sound to catch your ear and complement the music without dominating it, creating an eerie and unnerving undercurrent that bubbles below the song’s melody. Stereo separation and imaging are also excellent via the ATC on this track, as it pushes the rumbling bass notes to the edges of the healthy soundstage it conjures, while Billie’s vocals snap into focus straight down the centre.

While the ATC’s focus on accuracy is unashamedly keen, that doesn’t mean it’s lacking in unlocking the emotion in the music too. With a re-issued pressing of Billie Holiday’s Lady in Satin LP on my VPI Scout 1.1’s platter, her vocals on side-A closer Violets For Your Furs float from my speakers in an effortlessly smooth delivery, with the ATC conveying every lift and nuance, allowing the live and real nature of this LP to be truly appreciated.

Despite its modest appearance, this really is a lot of amp for the money. It’s clear ATC has engineered the SIA2-100 to strike a difficult balance of accuracy and neutrality without compromising in the musicality stakes. Put simply it’s an underrated mid to hi-end bargain.

Get all our ATC news and reviews