The Altair G1 digital audio streamer, priced at £1,999, is the entry model to Auralic’s sophisticated range of networked audio components and represents its most complete digital music solution so far.

My first experience with the music streaming specialist came in 2016 when I was introduced to its compact but highly capable Aries Mini networked music player. Priced around £450 at the time, the Aries Mini was a no-brainer for anyone wanting to enter the world of high-quality audio streaming at low cost. The small but mighty component was a great introduction to the company’s range of streaming solutions but sadly, this model is no longer available.

The Aries name lives on through the company’s Aries G1 (£1,999) and G2.1 (£4,199) wireless streaming transports. The new line is designed to bring the company’s innovative front end and impressive Lightning DS app control to external DACs, including its own Vega G2.1 streaming DAC (£5,999).

The Altair follows a similar form factor to the Aires series, which introduced a three-quarter-width anodised aluminium chassis with 4in LCD display when launched in late 2017. The high-quality casework is impressively solid and the front panel includes a convenient navigational dial and a 6.35mm headphone jack. It’s not as resistant to external noise interference as the company’s more upmarket Altair G2.1 variant (£4,599), but it’s very well thought out. 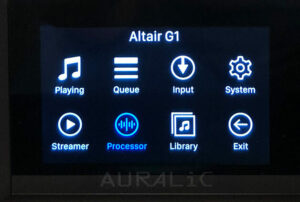 The high-quality front panel display shows album and track info. It’s not a touchscreen but this isn’t a big issue as the well-thought-out menus and navigational dial combine to make it intuitive to scroll through the list and push the control to select an option. Album artwork looks superb on the 300ppi screen. My only minor grumble is that the font size for the list of System menus could do with being larger.

As well as a UPnP/DNLA streaming module, the Altair G1 has a built-in DAC capable of handling PCM up to 32-bit/384kHz and DSD up to 22.57892MHz (DSD512). There’s room at the back to plug in existing digital sources via individual Toslink and coaxial inputs and there’s also a USB-B port for adding an external music library. An internal 2.5in bay enables a 2TB SSD to be fitted for an additional £400, turning the Altair G1 into an effective music server/player. Unlike the original Altair, the G1 cannot output to an external DAC of your choice and is totally fixed to its built-in ESS9038Q2M DAC.

The Altair does offer customisation in other areas, though. This extends to trimming the left or right channel output levels to tailor particular loudspeakers to compensate for room layout arrangements and there are EQ adjustments too. The DAC itself also offers four nuanced filters labelled Precise, Dynamic, Balance and Smooth, each developed to suit the sonic quality of any style or music.

Lastly, Smart-IR Control assigns key functionality buttons such as play/pause, volume and track select to any remote handset you choose. 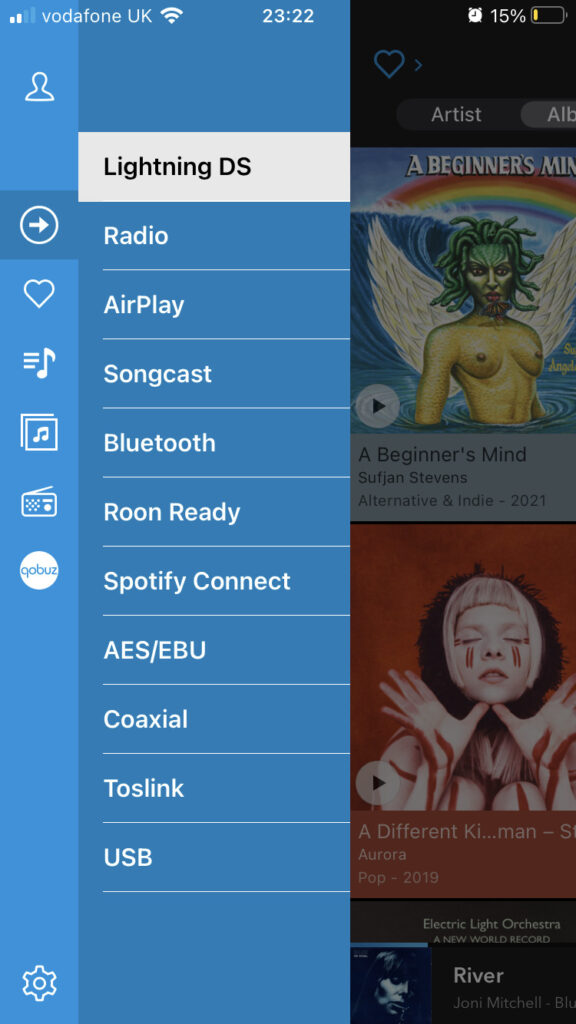 Finessing the digital music experience is clearly Auralic’s raison d’être. Its Lightning DS system control app is among one of the best I’ve encountered. Only BluOS (supported by brands including NAD and Bluesound) is more intuitive, but it’s a close-run thing.

There are some functionality differences between the app versions for iPhone and iPad, but both offer impressive functionality. An Android version would of course be a welcome development to further brand appeal, but there are no plans.

If I’m being hyper critical, the app’s search functionality can be a bit finicky about some entries. It’s not particularly forgiving of partial track names, album titles or misspellings, and my searches too often return ‘no search results found’.

Along with the control app, Lightning Server renders music library information and artwork. This enables super-slick playback of files stored on UPnP/DNLA devices found on a home network or connected via the USB port as well as the optional 2TB SSD inside.

Embedded streaming service support includes Qobuz, Tidal and HighResAudio, plus Spotify Connect is on board and the Altair is Roon Ready. There’s no support for Chromecast though.

Lightning Server makes mapping home networked music libraries to the control app pretty straightforward. The time taken to scan the contents of the library will depend on the number of files – it took around 30 minutes to scan the 23,615 tracks found on my Melco N1 music server connected to my home network.

Once a library scan is complete, music can be played by selecting My Music on the Lightning DS app home screen. It takes extra time to populate all the album artwork but this continues in the background even while music files are playing. 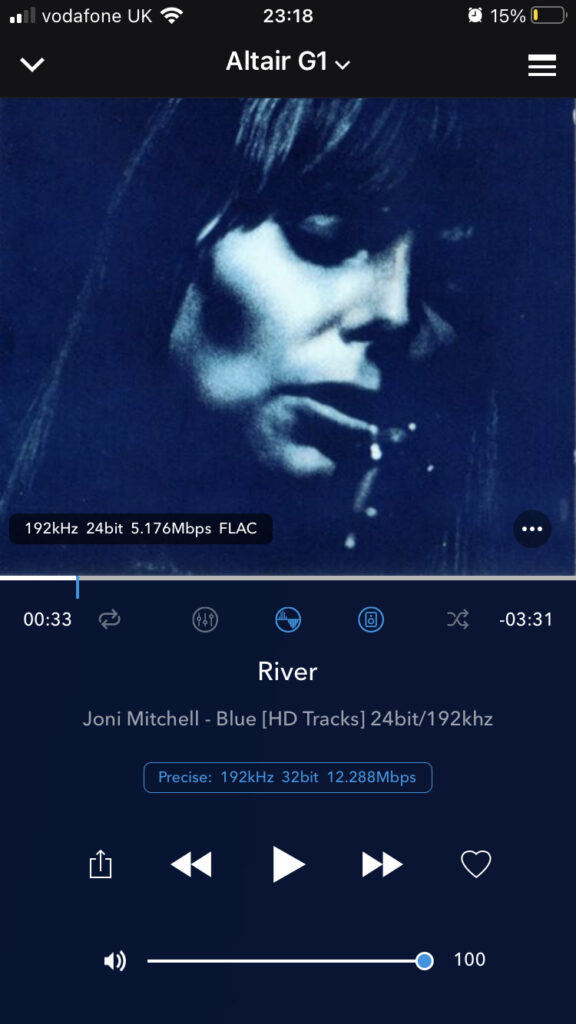 Ripping CDs and adding files to a music library is something of a revelation via the Altair. Simply hook up a generic USB disc drive to the USB-A port and insert the CD you want to rip. With Audio CD Ripping enabled via the Additional Operations menu on the Lightning DS app, ripping starts immediately and a glitch-free file is automatically saved and indexed to the library – a copy of Nuyorican Soul is ripped in a matter of minutes and stored to my Melco library in 16-bit/44.1kHz FLAC format complete with album artwork. Neat!

The Altair’s output level can be adjusted through the app. This is particularly handy if, like me, you enjoy jumping between tracks. Switching in the 100-step volume control via the Additional Operations menu makes no discernible difference to sound quality and gives me complete control to compensate for level differences between recordings. It’s a useful function and also makes the Altair a viable digital preamp for a power amplifier or connected directly to a pair of active speakers.

For this review, the Altair runs at fixed line-level into a Musical Fidelity M6 500i integrated amplifier, connected via Chord Company’s Clearway stereo RCA analogue interconnect.

Music sounds better with you 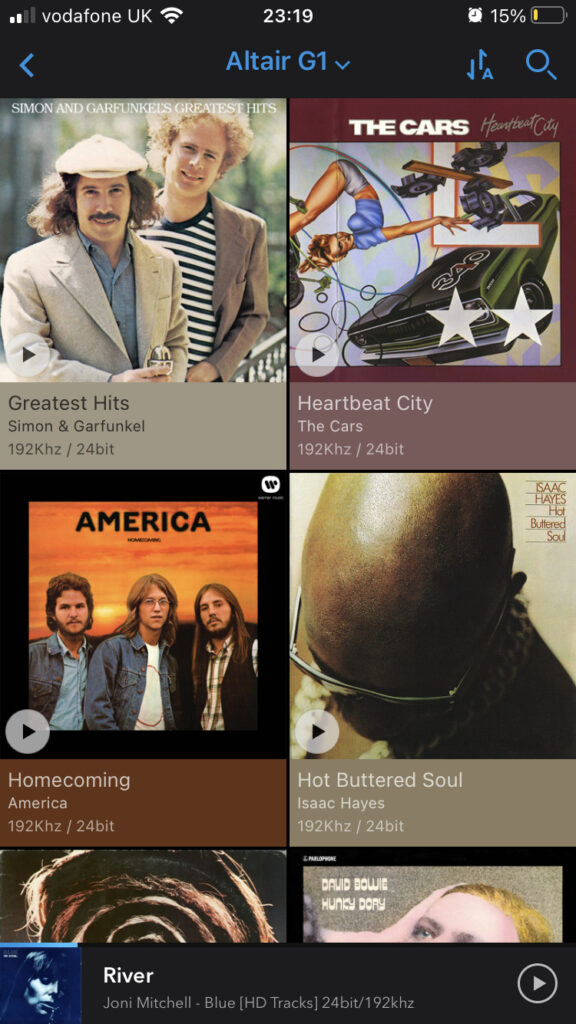 It’s a slick experience scrolling through my music library as well as the music streaming services I’m signed up to. Very quickly I’m listening to track after track seamlessly pulled in from different locations by the Lightning DS app. It’s tremendously impressive just how stable the app is and nothing I do trips it up.

The Altair’s built-in DAC has engaging energy, delivering all kinds of music with scale and a sense of performance. I favour the Precise filter option of the four modes available. I confess, though, that I am not entirely sure whether this is a psychoacoustic matter because of the filter’s name, or whether it genuinely does sound the best with the music I enjoy listening to. Trying out the three other filter options demonstrates nuanced merits but it really is very subtle and the default setting is the one I keep returning to.

Some DACs can sound clinical, but the Altair’s ESS Sabre DAC implementation brings a sense of richness to everything it puts out. The way I’m able to hear into the mix of of recordings I know well is very addictive. Vocals are rich and well defined and a 24/96 version of Pale Shelter by Tears for Fears streamed from my Melco music library, delivers a performance that defies the 1983 synthesiser pop track’s vintage in delivering satisfying bass levels and shimmering vocals and guitars to sound bigger and better than ever.

Another era-defying recording and total treat for the ears is Isaac Hayes’ Hot Buttered Soul. It sounds tonally full and rich with the Altair. The superb soundstage and ease of delivery keeps me listening and I begin to appreciate why this 1969 soul album is such a landmark recording.

Content via Qobuz sounds just as engaging. In fact, I find it impossible to tell the 16/44 Nuyorican Soul ripped music library version apart from a Qobuz stream version. Even lossy content from Spotify streamed via Airplay benefits from Auralic’s smooth digital treatment, sounding much less processed and remarkably forgiving with lesser-quality content.

The addition of a headphone amp makes the Altair even more of a compelling proposition to the hifi rack. It drives a pair of Oppo PM-2 headphones with ease and delivers a similarly insightful and engaging sonic character with every kind of digital music I throw at it.

Auralic may be a fairly recent addition to the world of hifi but it has quickly become one of the go-to brands for hi-res network audio solutions among quality audio fans. And with the Altair G1 digital audio streamer as its entry point solution, it’s very easy to understand why.

Get all our Auralic news and reviews

Melco for the midrange

Next level for Norma