Some hifi brands pride themselves on churning out their latest hardware as often as we change our socks, to keep their customers hungry for the latest tweaks and makeovers.

But that is not Copenhagen based amplifier specialist Copland’s way. Instead, this Danish brand has established a solid reputation for releasing products to market that stand the test of time, which gives its customers peace of mind that what they are buying into is hifi that’s designed to last at the heart of their systems for years, alleviating the sense of upgraditus for the sake of it. 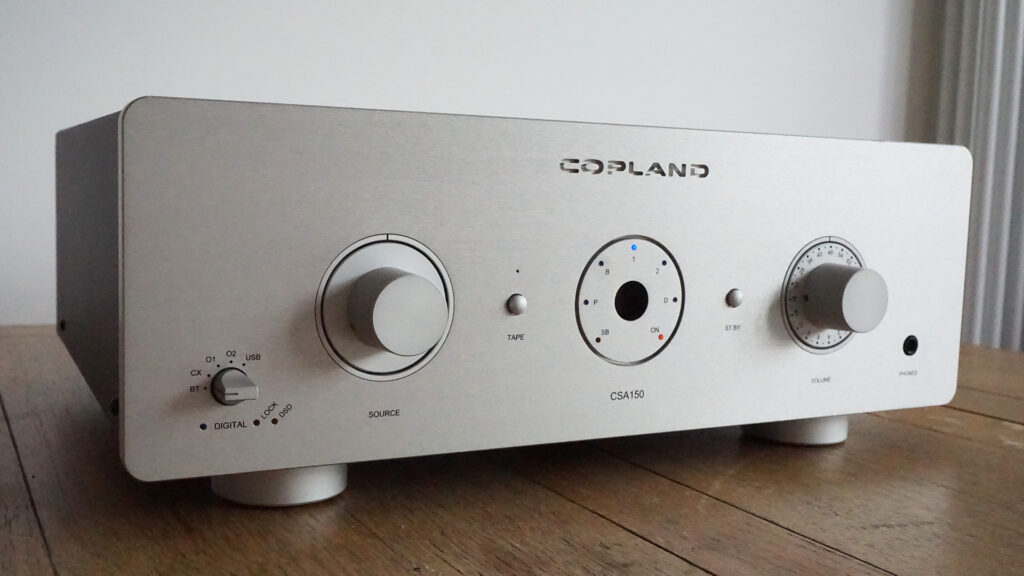 Timeless styling in a package that’s built to last. The CSA150 also comes in stealthy black

Priced at £4,988, the CSA150 is the highest specced and most powerful of Copland’s three CSA models, sitting above the CSA70 (£2,988) and CSA100 (£3,988), with their model numbers representing their claimed power outputs into 8 ohms. Beyond these models there is also the longstanding CTA408 at £6,398 which is more of a valve thoroughbred than a hybrid amp.

And hybrid is what this amp is, as alongside its approach to longevity, valve orientated internals have also been core to Copland’s design ethos since it launched back in 1984. The CSA moniker is derived from its ‘Copland Synetic Amplifiers’ hybrid circuit design that harks back to the early ‘90s and has been evolved ever since. For the CSA150 (and CSA100) this equates to a 6922 double-triode valve incorporated into its preamp stage alongside solid-state MOSFETs, driving a bipolar transistor output stage to marry the organic sounding sonics of valve amplification with the dynamic power and grip of transistors. 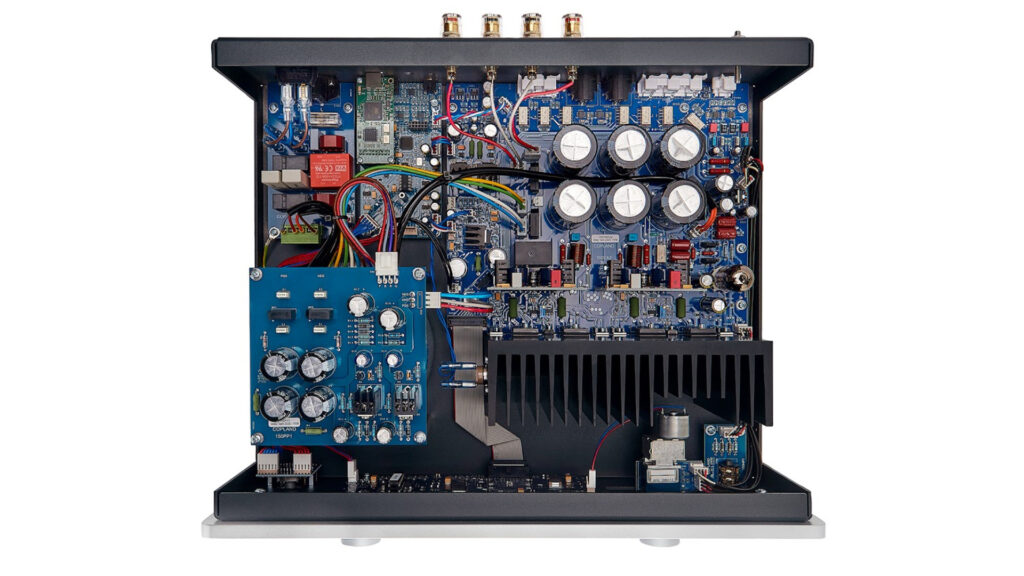 A sight to behold, the Copland’s internal circuits sit on separate boards for each section and are exceptionally well made and laid out. Note the 9622 tube in the preamp stage to the right of shot above the heatsinks

Connections wise the CSA150 covers all bases, with analogue sockets spread over three line-level, one phono (moving-magnet only) and one balanced set of inputs plus fixed and variable outputs, should you want to add another power amp or tape loop (remember those?). On the digital side there are two optical sockets, one coaxial and one USB-B handled by a Sabre Reference ES9018 DAC chip configured in quad mono operation, catering for PCM files up to 32-bit/192kHz and DSD128. The amp’s asynchronous USB circuitry is governed by its own clock that’s independent of the USB clock and fully DC-separated from the input source by digital isolators.

Our demo model also came equipped with an optional aptX HD Bluetooth module which costs an extra £298, and buys you a convenient streaming feature for smartphones and the like.

Speaker outputs are limited to a single set of top quality multi-way connections per channel, so for those looking to bi-wire you’d need to add a separate amp should you feel the urge, driven via the Copland’s variable outputs. 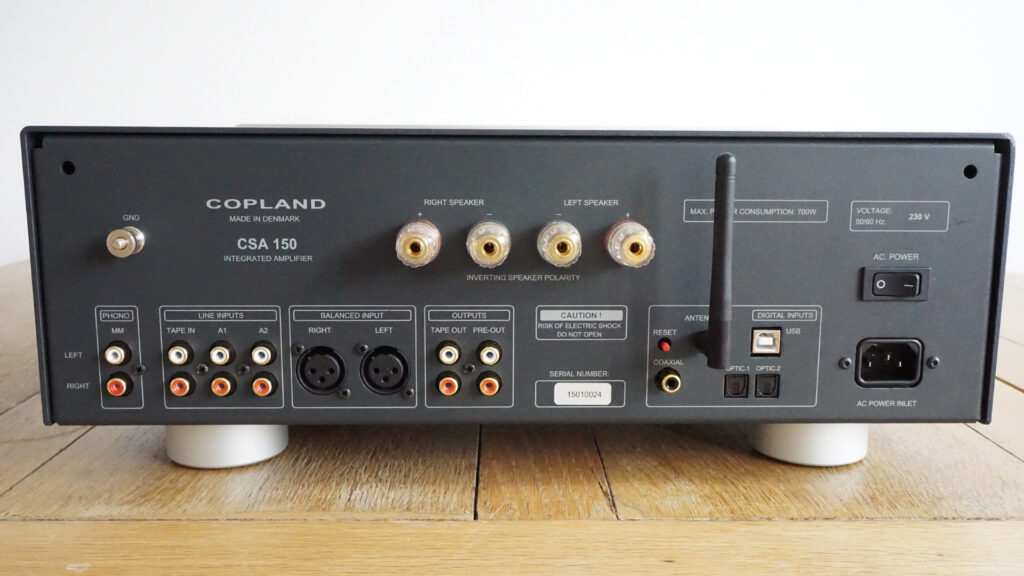 A well laid out and sensible spread of connections with balanced, phono and line level over analogue alongside digital inputs via optical, coaxial, USB and HD Bluetooth

Fresh from its packaging this amp gets your attention with how elegantly simple and purposeful its casework and execution feels. The 10mm thick brushed front panel with expertly embossed brand name and solid to the touch rotary dials strike a perfect balance of form and function. This amp oozes quality without screaming for attention.

To the touch the large rotary dials for volume and input selection are silky smooth, with tactile clicks for the latter. There’s also a smaller sub-dial for its digital inputs on the front panel’s lower left corner, which is balanced out by a handy 6.35mm headphone socket on the opposite corner, making the CSA150 a consummate allrounder. Selected inputs are denoted by the front panel’s circular display with blue LED lights. 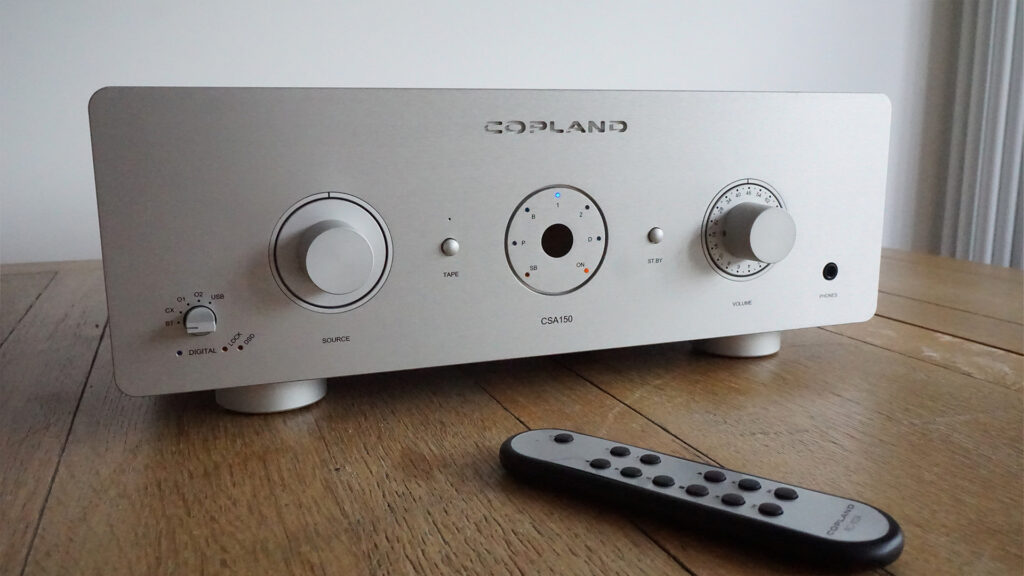 Being almost 30mm taller than its CSA100 sibling, the CSA150 is beefed up to house a larger power supply and toroidal transformer. This allows the CSA150 more physical presence and more space on its rear panel to host its well spaced socketry, which looks and feels of the quality you’d expect for an amp at this price.

As the build implies, set up is a doddle. Even the Bluetooth connection pairs with ease once your device sees it within range. Windows users will need to install a USB driver to access the amp’s DAC over USB, but this is also self explanatory. 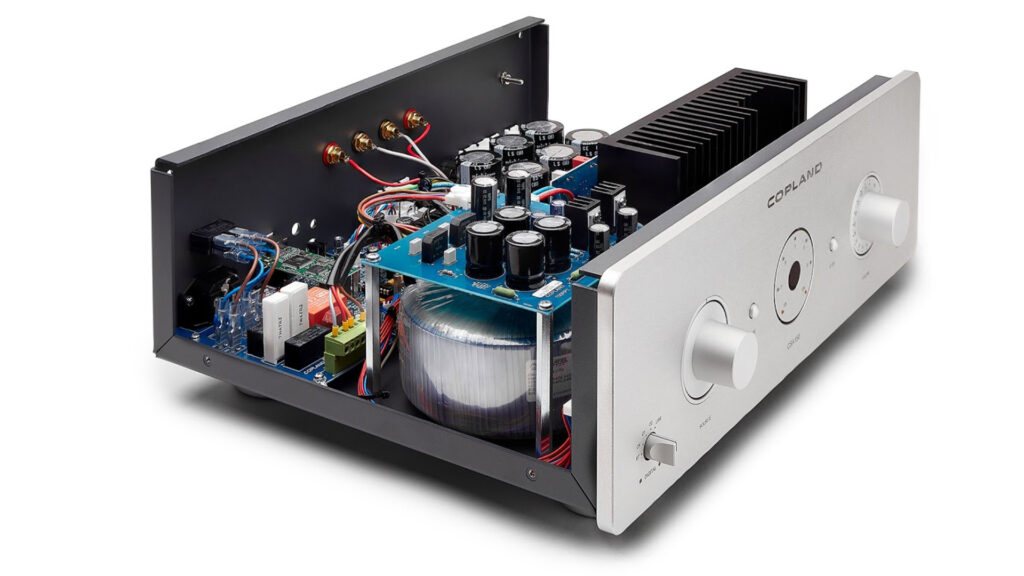 Hooked up to a VPI Scout 21 turntable, Primare NP30 network player and driving my Dynaudio Focus 260 loudspeakers, this amp sounds right at home with its mostly Scandi counterparts (the New Jersey built VPI being the exception).

As the internal architecture alludes to, where this amp really excels is in its talents for marrying a silky smooth organic sounding delivery with solid state control. Serving up a 16-bit/44kHz ALAC rip of Mazzy Star’s Fade Into You from my NAS drive presents Hope Sandoval’s dreamy vocals with a gorgeous tonality, stripping back the layers of hardness I’m used to hearing from many of the pure transistor breed, making her voice sound more natural and less produced. Via the Copland, her rich breathy delivery is the aural equivalent of that first taste of lavish chocolate and with a sonic sweetness that’s just as delicious.

The Copland’s exceptional lack of harshness is a trait that runs through its overall presentation. The soundstage it presents strikes a noticeable balance in scale, depth and presence without being forward. Serving up Kings of Leon’s Walls track at 24/48 from Qobuz via my windows based laptop straight into the amp’s DAC over USB, demonstrates how the 150 lays forth all the musical detail with a smooth clarity while still sounding full of energy. The looping guitar riff has just the right amount of sustain and texture to live in the mix with unforced realism, while the texture of the piano notes and echoing guitar chords at the margins of the soundstage rise and reverberate with superb imaging, making my speakers aurally disappear. 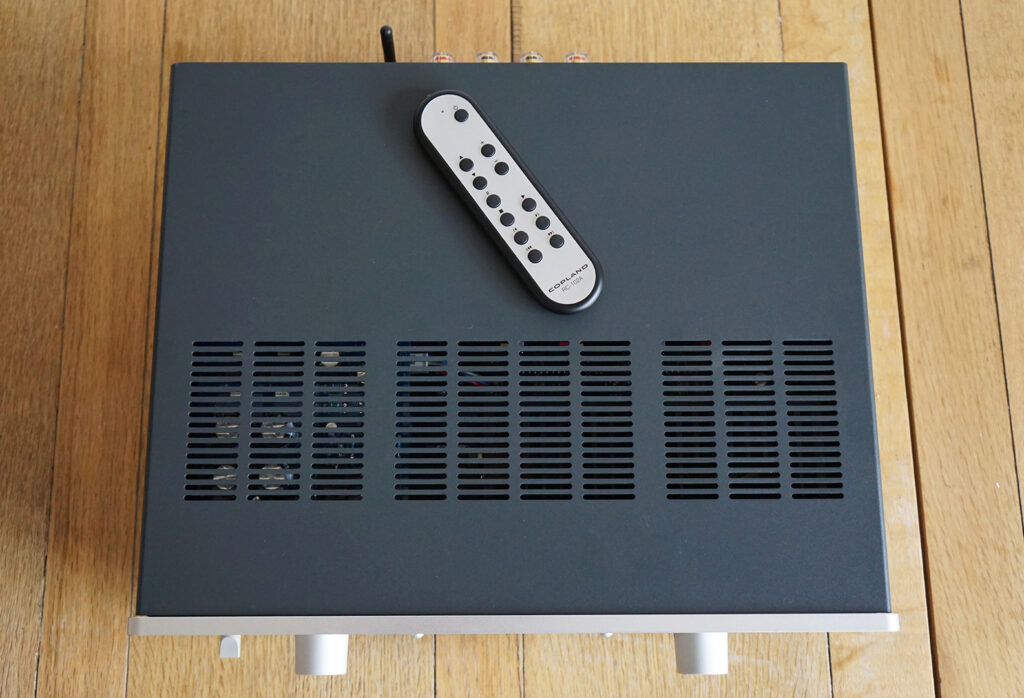 Clearly this amp has a mature character to it that favours more long term listening over attention grabbing sonic fireworks, as you’d perhaps expect at this price point. But that doesn’t mean it can’t let rip when required. Armed with Nirvana’s Incesticide on the VPI’s platter being transcribed by a Benz Micro high output moving coil cartridge via a Weisline tonearm cable, and the Copland demonstrates its internal phono stage is no mere add on. Its noise floor seems exceptionally quiet, contrasting this real world recording.

In simple terms, what this amp does well is make even poor recordings sound more listenable, and therefore more enjoyable. The thick distorted guitar riffs on the opening track Dive have plenty of body to them and a richness that warrants repeat plays, while Chad Channing’s rapid fire percussion is laced with energy and punch. And because of how this amp avoids harshness, winding up the wick beyond where I normally would go on this album (and for longer) is all too alluring.

At the lower end of proceedings you’ll not mistake the Copland for a multi-boxed speaker melting solid state package, but that’s entirely the point of this amp. Combined with its sweet and lucid midrange, the Copland’s lower notes favour finesse over force.

On Cat Power’s Endless Sea streamed via Qobuz at 24/96, the bass guitar notes are more than satisfyingly articulated, with each note thumping the lower register like a finely tuned boxer landing blows with precision and accuracy. There’s none of the bloom or overhang I’ve heard some amps apply here, which can thicken up the mix and muddy the percussion. Instead the Copland presents everything as it should be, and without exaggeration.

In an age where many manufacturers churn out new products like they’re in a space race, it’s refreshing to celebrate products that are designed for long term enjoyment instead of short term reward. In this respect Copland sets the standard with the CSA150, thanks to its exemplary build, timeless styling and natural sounding sonics that make for effortless longterm enjoyment. And with its built in DAC, headphone output and moving magnet phono stage, this is a considered package for those who want hi-end sounds without the hi-end box count.

Ideal for… Those who favour a silky smooth, musical and accurate presentation in a class package with sensible add ons

Consider… Only one set of balanced inputs and speaker outputs, but this will be enough for most

Get all our Copland news and reviews