Like Levi’s, Harley-Davidson and Bruce Springsteen, McIntosh is one of a few iconic US brands that has managed to stay true to its authentic roots, while evolving to remain utterly relevant to today’s audiences.

Despite making audio inroads into other industries such as automotive, true hi-end hifi that recreates the live experience is where McIntosh mostly butters its bread, stemming from its era defining amps that powered the music of Woodstock in ’69.

These days McIntosh offers a wealth of products from lifestyle oriented to no-compromise separates, spread across solid state and tube powered kit (including a modern interpretation of its aforementioned Woodstock MC3500), all brought together with the brand’s distinctive styling that’s so gothic, it’s rumoured Dracula has a loyalty card. 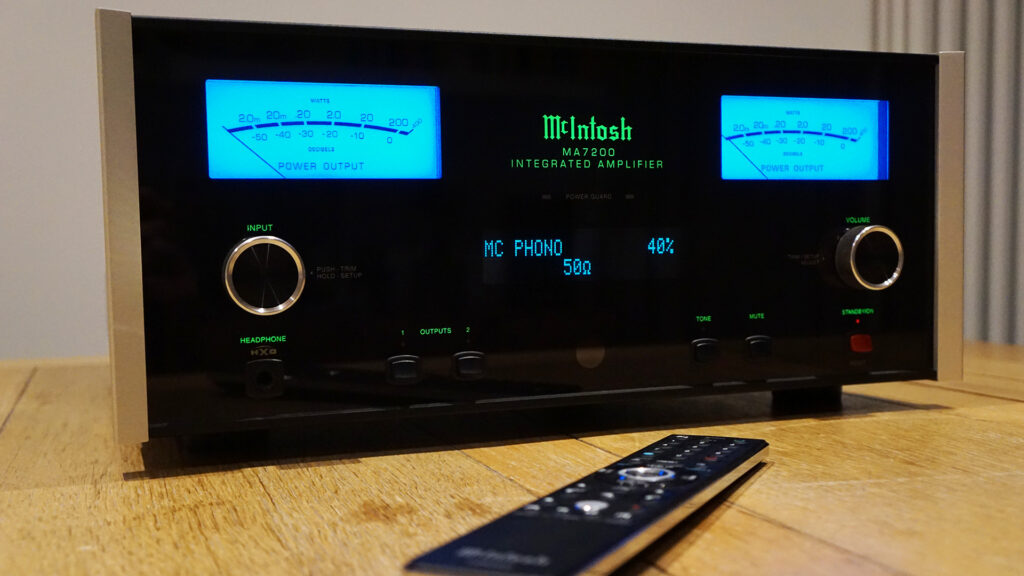 What you do get with the MA7200 is an integrated amplifier that’s festooned with digital and analogue connections and built without compromise.

While McIntosh may be a marmite brand for many on the eye, it’s admirable how much the American company has stuck to its guns with its trademark design cues of glass front panel hosting retro switchgear and backlit green logo, alongside a pair of bright blue VU meters. I’m also a big fan of the top panel typography that spells out much of the internals’ technical data, including its transformers’ configurations (more on these later), telling you this is more of a professional listening tool than lifestyle accessory. 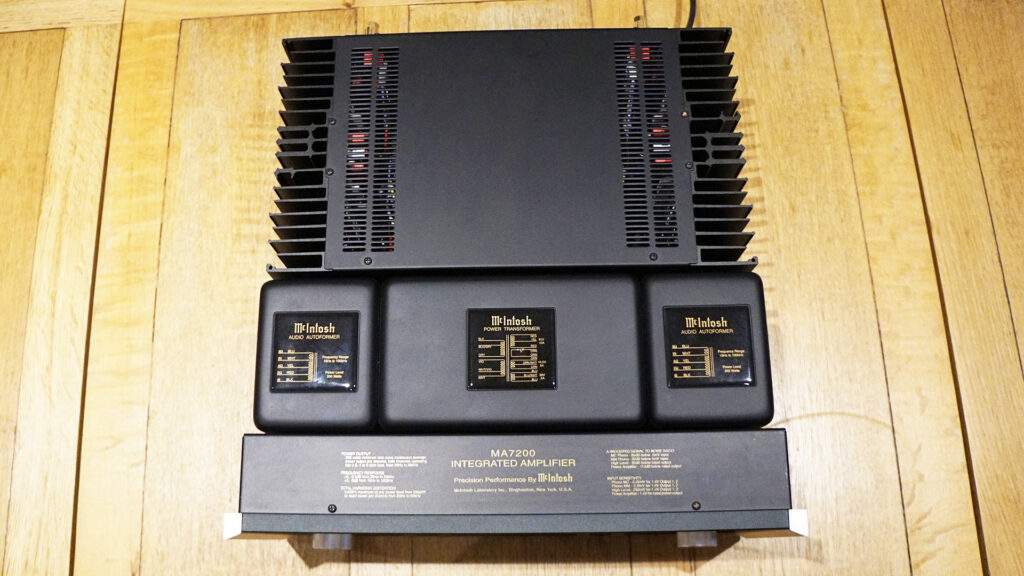 At almost half a metre deep and weighing in at over 34kg, ‘space-saving’ is not a term I’d use to describe this amp (despite what the website says), although compared to McIntosh stacks many owners aspire to, the MA7200 could be considered puny in context, but in general terms it’s a whopper.

Much of its weight is down to the cutting edge Autoformer topology that lurks under the hood, borrowed from the brand’s approach to valve amps with dedicated high quality left and right channel transformers between its thermal track transistors (four pairs per side, with inbuilt temperature sensors and bias regulation) and speaker outputs. This approach places less stress on the transistors, meaning they can react and respond to any demands placed on them with ease.

With so much power, I was expecting egg frying temperatures on the amp’s heatsinks but true to its word, the amp runs remarkably cool for a 200W Class AB beast. This topology also helps to deliver a more consistent load to the loudspeakers, with output sockets for 8, 4 and 2ohm impedances on its rear panel (in a similar manner to valve amps). 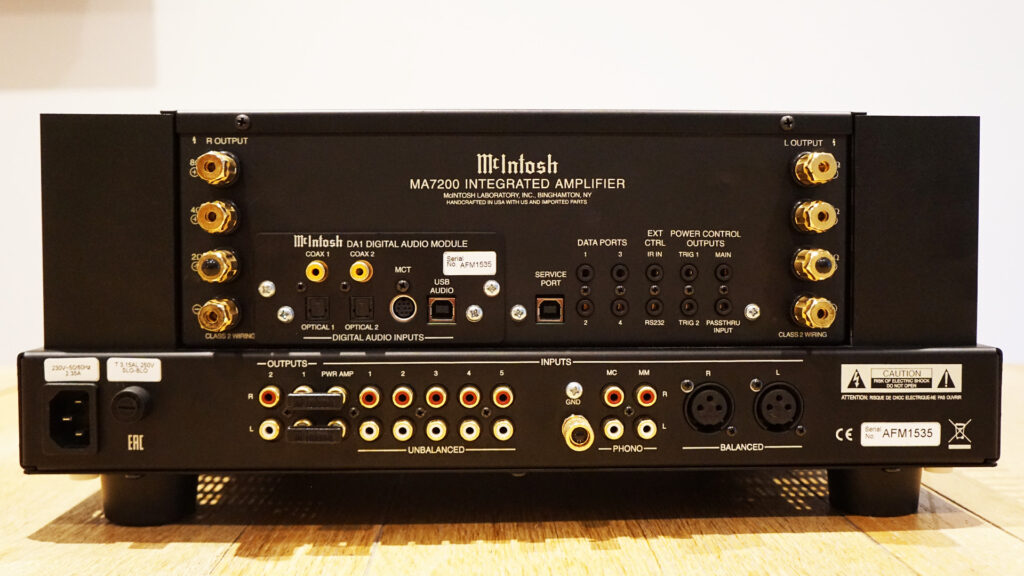 Most users will be more than satisfied inputs wise, with five pairs of line-level (RCA) and one pair of balanced (XLR) analogue sockets, plus separate connections for moving magnet (MM) and moving coil (MC) configured turntables, meaning you could hook up two decks or tonearms should you wish. Digital inputs are equally well served via the onboard DA1 module, which offers two coaxial and two optical sockets catering for files up to 24-bit/192kHz and a USB input that pushes the envelope to 32-bit/384kHz, DSD256 and DXD384kHz. There’s also a wealth of connections to incorporate the amp into a wider McIntosh system, including external jumpers for separating the pre and power amp sections.

A quick press of the input selector takes you into deeper sub menus, which cover everything from dimming the meter lights and running in mono mode, to adjusting balance and fine tuning tone levels. You can also set the MC input’s resistance to 50, 100, 200, 400 or 1,000ohms. 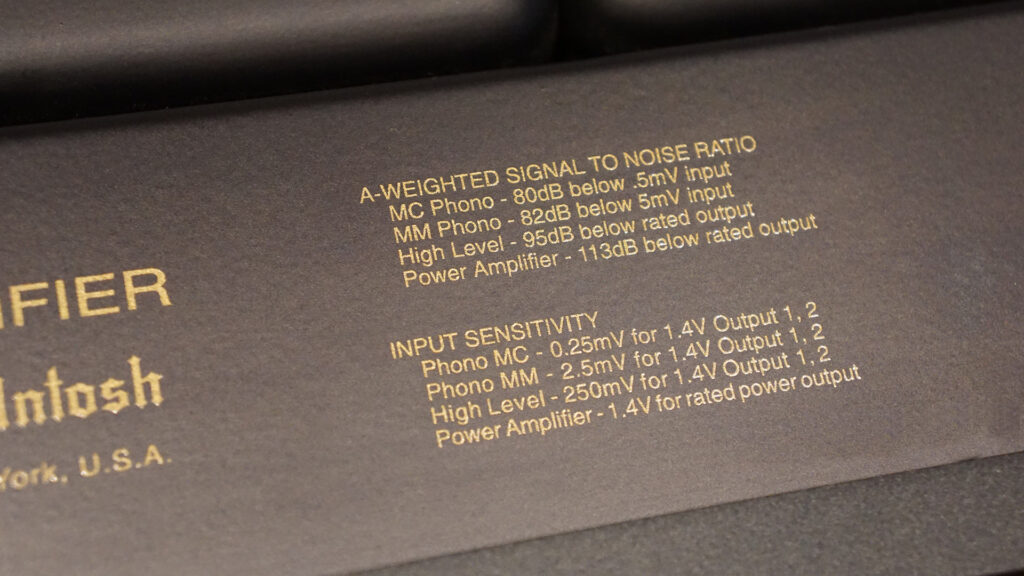 Having run the amp at the heart of my system in recent months, its stall is well set out. Driving my reference legacy Dynaudio Focus 260 loudspeakers has the McIntosh behaving like one of those standout teachers you remember as a kid, with natural talent for getting the best out of every student. While these speakers retailed a good few rungs down from the McIntosh in price, it takes an amp of considerable grip and, well, focus, to get the best out of them and matching their quoted 4ohm impedance with the amp’s 4ohm output taps opens them up like never before.

Spinning The Jimi Hendrix Experience’s 3rd Stone From The Sun from their Are You Experienced LP via a VPI Scout 21 fitting with a Benz Micro Ace SH cartridge does indeed sound otherworldly. The soundstage conveyed by the McIntosh is truly awesome, rewarding each musician ample space to freestyle in the mix with a realism that takes you beyond the recording and seemingly into the live studio. Hendrix’s guitar echoes and effects punctuate the air from all angles, showcasing how utterly encompassing stereo can sound. And when the title track’s instruments kick in it’s hairs on the back of the neck stuff as Jimi’s grungey guitar chords and Mitch Mitchell’s marching band percussion rewrite the rock rule book.

Fast forward almost 30 years to the more polished production of INXS’s Welcome To Wherever You Are and the opening bass line on Wishing Well is rendered with such expansive scale and texture it’s as though the Dyns have gained another bass driver. More impressive though is how the bottom end is rendered by the big Mac than the amount of bass on offer. On this track for example, I detect with ease the variations in force applied to each string when plucked, causing their texture and leading edges to soften or firm up.  It’s this level of attention that really stands out with the 7200, in how it can do smooth and mellow while serving up levels of detail that goes beyond most amps.

Easy on the gas

Of course with 200W on tap, this amp will drive even the most demanding speakers to house shaking levels without getting out of first gear, but audio muscle in amps at this price is nothing new. What’s more impressive is how it conveys the same sense of scale and weight through a grand soundstage at all volume levels, including late-night whisper quiet. An ideal metaphor is that of driving a big V12 engine at low speed – you can sense all of its unstressed power without having to give it the full beans in a way that brings confidence to the driving experience and puts a big smile on your face.

Dialling in a 24-bit/88kHz file of Cat Power’s I Think Of Angels from my Windows laptop running Qobuz fed directly into the McIntosh’s USB via a Chord Company Clearway USB and the amp delivers Chan Marshall’s superbly recorded vocals with a presence that’s edge of your seat stuff, especially across its midrange, which is as smooth as crushed velvet. The way it affords the background strings such weight with delicacy, allowing them to emerge into full view and fall away with effortless grace reminds me of the very best of the valve breed, but with added dynamic grip.

Switching to headphone listening is just as rewarding. All the depth, detail and scale is there with the added intimacy you only tend to hear with refined standalone can amps, that makes this no mere afterthought and worthy of an integrated amp at this price.

Put simply this is an astonishingly good amplifier that justifies its price tag. Blending together the brand’s modern take on traditional analogue approaches with a healthy dose of digital inputs plus a top flight phono stage, headphone amp and battleship build quality, it’s easy to see where your money goes.

Sonically the 7200 can ultimately be defined as ‘sophisticated muscle’, with a class leading talent for getting the best out of even the most demanding speakers, gaining it top marks.