When it comes to adding a subwoofer to a high-quality stereo system, REL Acoustics is one of the main forces helping to reshape audiophile thinking. Thanks to the UK-based specialist’s continuous development with each new active sub-bass speaker design seemingly more musically refined than the last, today’s subs bring a genuine sense of tunefulness and subtlety to low frequencies as part of a stereo music setup.

Helping consumers understand the active sub-bass speaker company’s approach is lead designer John Hunter. As a driving force behind the brand, John shares his audio expertise and showcases the company’s latest models through a series of informative video blogs. These demonstrate just how effective a sub can be as an upgrade for an under-performing stereo setup as well as a tool to help overcome a challenging room acoustic. 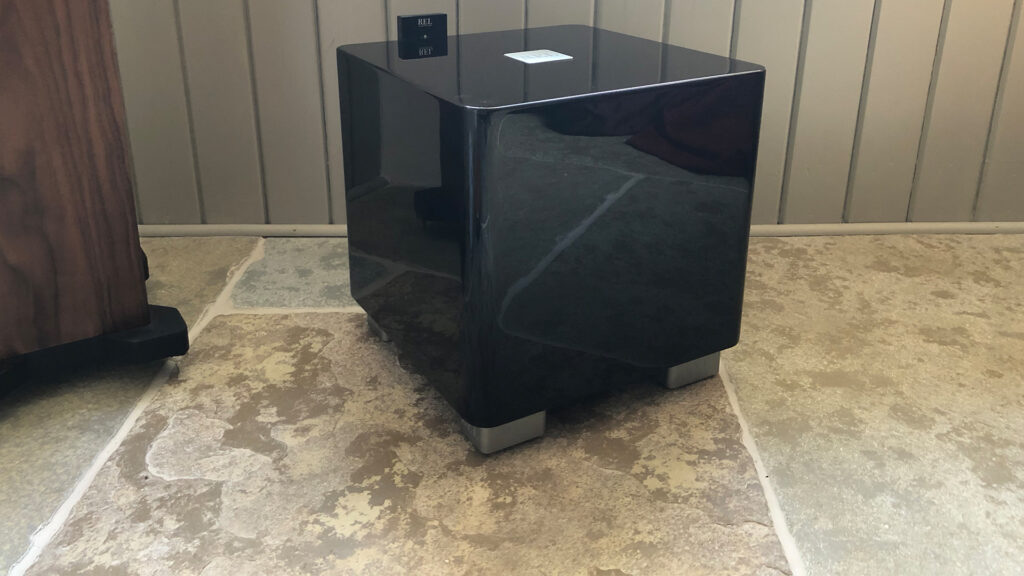 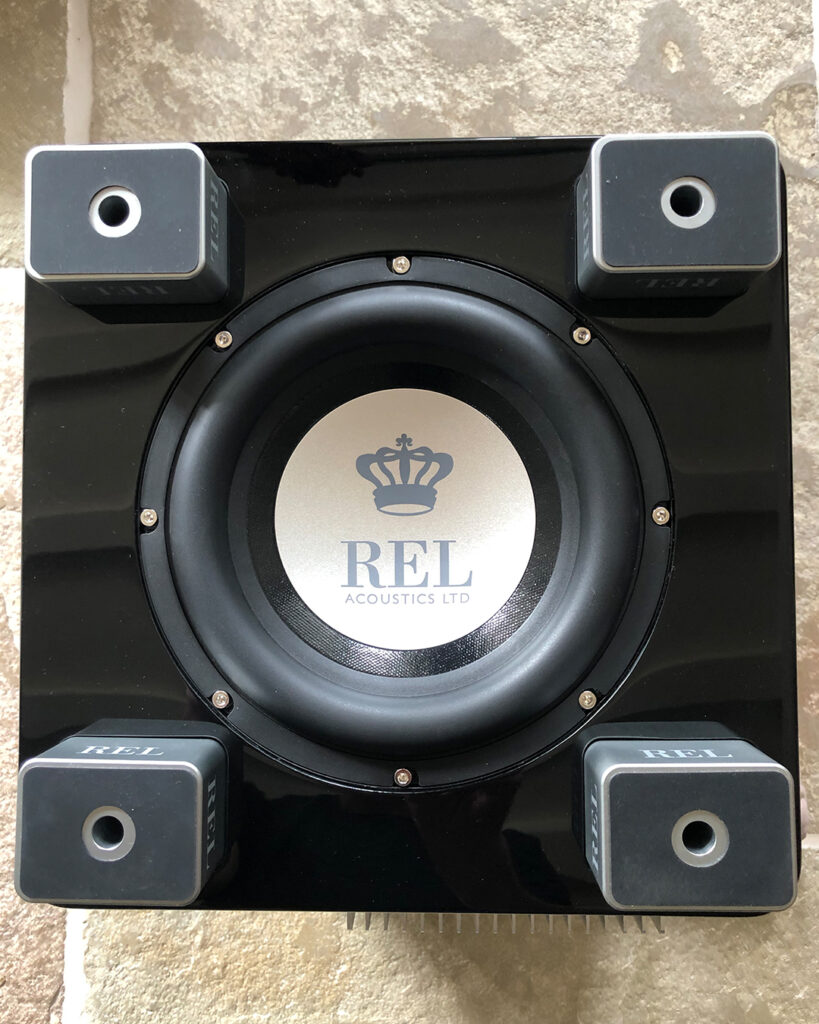 The latest models in the company’s portfolio to undergo a revamp is the Serie T range with the introduction of the next-gen T/x series that replaces the T/i lineup. The redeveloped series introduces three new designs with the top-of-the-range T/9x priced at £1,299, followed by the T/7x at £999 and the T/5x (as reviewed) costing £649. Given the nickname ‘baby bear’ by the design team, the T/5x may be the smallest unit in the new lineup but as the moniker suggests, it packs plenty of punch.

The T/5x measures just 300 x 307 x 313mm (WxHxD), and the MDF cabinet uses internal bracing at key points to ensure that it’s as acoustically inert as possible to avoid adding anything additional to the sound output.

Unlike some other REL designs, Serie T models aren’t stackable and cannot be used for line array configurations. The T/x series adds bigger feet for greater surface area contact with the floor for improved stability. The height and shape of the feet are said to be carefully considered for each REL model to achieve optimum airflow of soundwaves generated by the downward-firing driver. Even the REL badge centrally positioned on the top face of the cabinet is said to help aid performance by dissipating unwanted cabinet resonances thanks to the weight and damping characteristics of the mounted alloy billet. 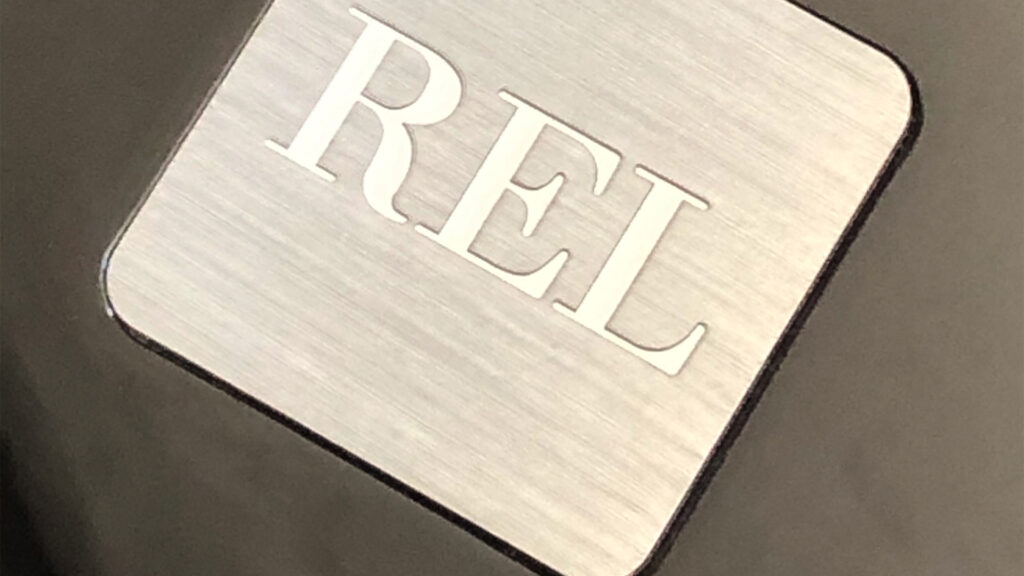 Not just for show, REL’s alloy badge is a heavyweight when it comes to curbing unwanted cabinet resonances

The cabinet’s rounded corners showcase a new construction for the T/x series and introduce a softer, modern style, helping to make the cube-shaped design more living room-friendly and easy on the eye. As with all REL subs, colour finish options are high-gloss black or white and the company tells us that the prized mirror-like finish is achieved through five coats of spray paint where each coat is applied both vertically and horizontally. 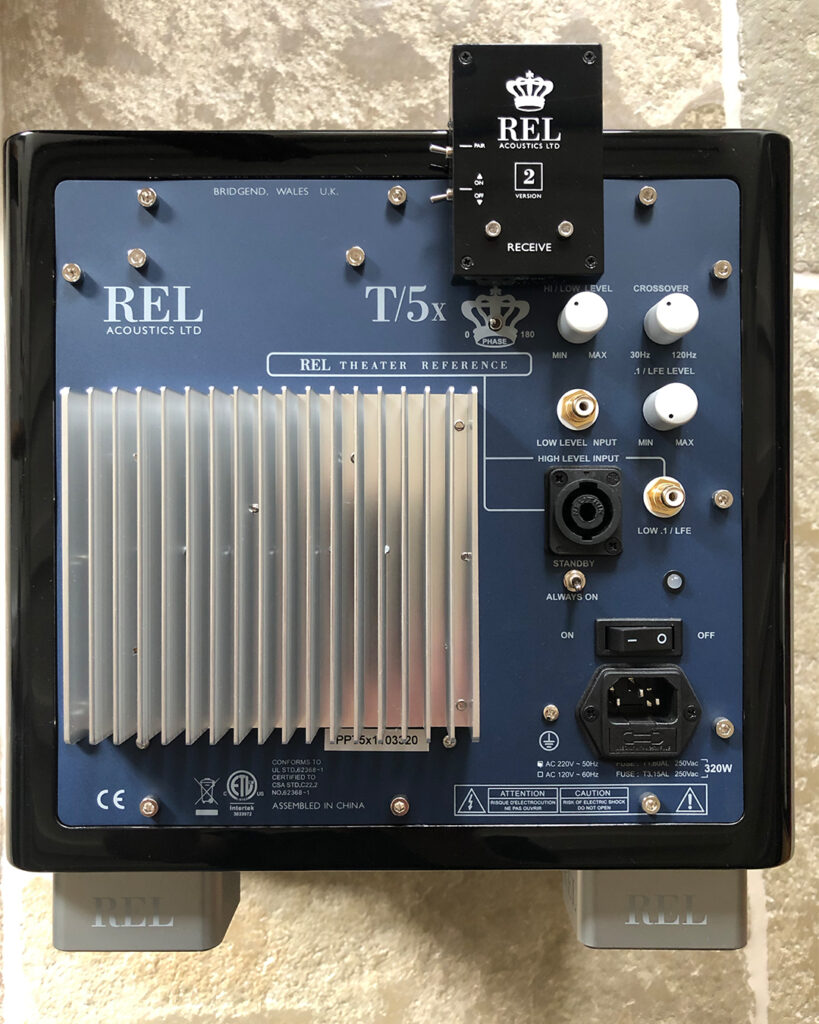 With the unit in position, integration controls and connections around the back of the T/5x are remarkably similar to many other REL subs I’ve seen, and demonstrate the company’s commitment to seamless transition from speaker to subwoofer for all kinds of configurations.

Audio connections from an amplifier can be done in one of two ways – for high-level inputs there’s a Neutrik Speakon locking connection, and for low-level signals there’s a single RCA input plus a dedicated RCA for LFE (low-frequency effects). Integration controls provide high and low-level input adjustment as well as LFE, variable crossover control and standby mode. There’s no reversible phase switch.

For wired setup from your amplifier of choice, there’s a 10m cable terminated with a high-level Neutrik Speakon lockable connector at one end and bare wires at the other. For this review, though, I opt for the company’s add-on Arrow Wireless system (£199), which is easy enough to install and adds a small receiver to a port at the back of the sub and pairs to a sending device that’s connected to the amp via the supplied Neutrik Speakon cable.

The best result in my room come from having the T/5x placed just behind the plane of the speakers to the left side of the room. For this review I use a pair of Dynaudio X38 floorstanding speakers and also a pair of Sonus faber Lumina I standmounts, placed on a pair of Hi-Fi Racks X50 wooden stands.

With no smart app or even a remote control to aid integrating the sub into my room acoustic and speakers from the comfort of my favourite listening position on the sofa, the REL feels a bit old-school when you consider the app-controlled world many of us now inhabit. This is no big deal, though, and is just the kind of control twiddling my hifi enthusiast fingers are used to and I quickly get the T/5x singing in my room by adjusting the crossover frequency and output level for optimum performance. Ideally, this is a two-man job – one to make the adjustments at the sub while the other assesses performance at the listening position and suggests incremental changes for best performance. Whichever way you carry out the integration procedure, though, it’s a good idea to listen in other areas to see how the sub’s output interacts with the entire room and to ensure you achieve a balanced sound. 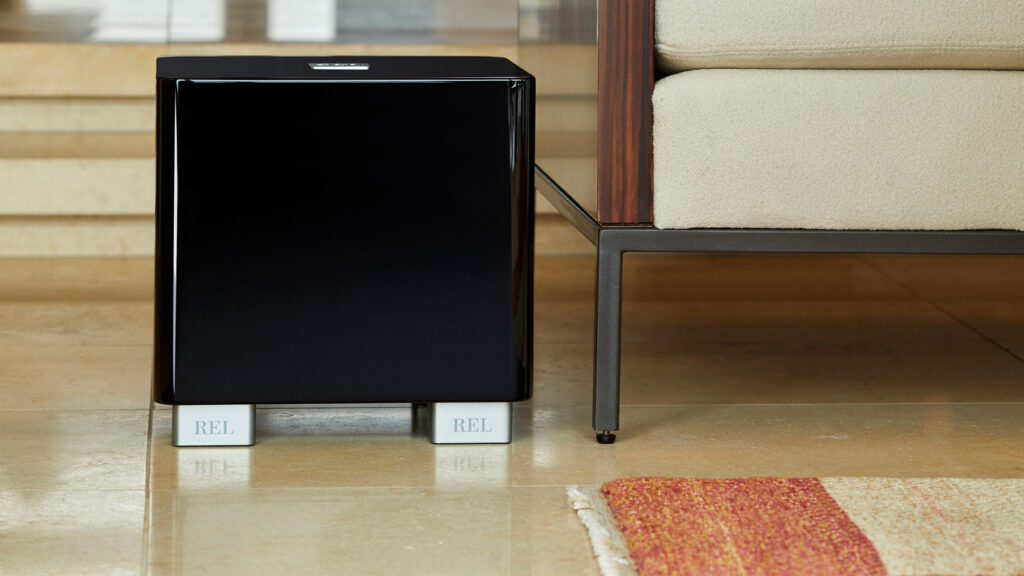 The Dynaudios dig deeper than many floorstanders I’ve heard and the spec sheet claims a frequency response down to 34Hz (+/-3dB). The T/5x offers bass extension down to 32Hz so it’s unlikely to bring much in the way of extra bass depth than the Dyns already deliver, but as I already have them in place, I try out the partnership to see how they fare together.

I have a couple of ‘go-to’ test tracks that are useful for striking a balance between establishing that fun element adding a subwoofer can bring to a system, while ensuring it doesn’t get too disruptive for the rest of the household or even the neighbours. Streaming a 16/44.1 FLAC version of Mark Ronson’s Don’t Leave Me Lonely taken from his Late Night Feelings album hits the spot immediately. The T/5x adds just enough extra weight to the track’s lower bass notes as Yebba’s outstanding vocal performance seems to grow in scale and the driving beat has an even greater sense of energy, bringing a smile to my face.

Swapping the Dyns for Sonus faber’s Lumina I and setting the crossover control on the sub to accommodate the standmount’s 65Hz bass roll off, the T/5x makes even more of an impression partnered with the compact speaker. Rated at 125W power output, the T/5x may not have the muscle of larger subs I’ve reviewed from further up the company‘s portfolio but it still manages to pack a punch with Billie Eilish’s Bad Guy, delivering the track’s thumping bass line with enough power and depth to properly shake the cobwebs from the room. I love the natural voicing of this Sonus faber standmount and the addition of the REL seems to make the three-dimensional soundstage even bigger. Music timing is surprisingly good too and Joy Orbison’s Better has bags of rhythmic energy and terrific musicality as the REL delivers the funky bassline without ever sounding sluggish.

The T/5x is a fabulous little subwoofer that grabs your attention for the sheer musical joy and engagement it brings to music. It represents one of the most effective upgrades I’ve heard to enhancing an audio system’s performance at the price. REL has worked hard to bring its acoustic design know-how to a wider audience and as the entry model to the revised T series, the T/5x represents a great starting point for music fans looking to give their favourite tunes a bit more oomph without breaking the bank.