When it comes to hi-end hifi, it can seem like the higher you climb the more complicated the end result, and for some this can make the whole system growing experience daunting, no matter what your budget.

It’s clear Dan D’Agostino Master Audio Systems gets this and his Progression series has focussed on offering amplifier options to suit owners who may prefer to go down the venerable integrated amplifier route before opening the door to separate pre, power and then mono options. 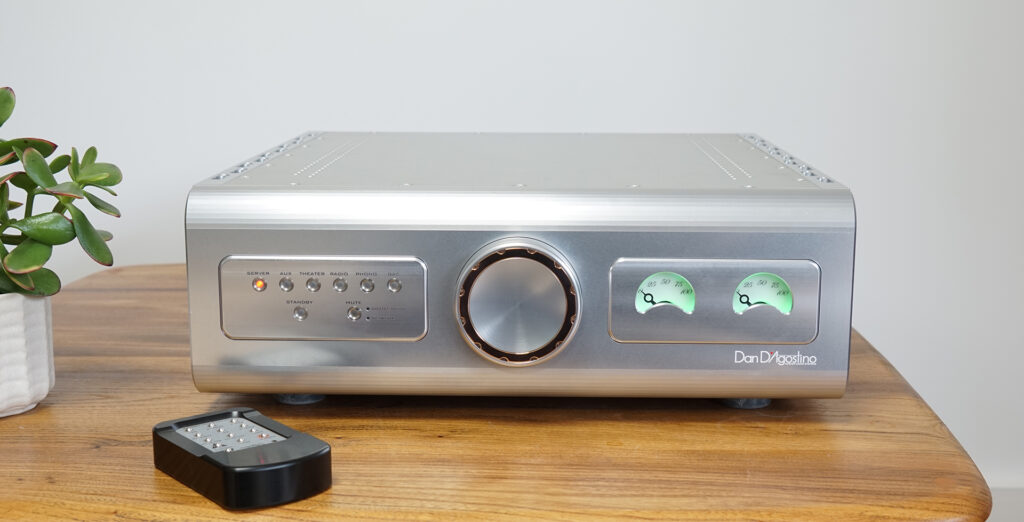 Also available in anodised black, few amplifiers look and feel his good. The front panel is nicely balanced with the input selectors to the left, meters to the right and a massive watch bezel inspired rotary volume at the centre

Of course company founder Dan D’Agostino is no hi-end newbie, earning his respected stripes at Krell for decades and gaining a global reputation for industry leading amplifier powerhouses, before going solo with his own brand.

First came his Momentum range, that set out the company’s stall for refined analogue power with distinctive steel and copper carcasses sporting venturi style heatsinks and Swiss watch inspired analogue level meters. And if these set a standard few could rival, the Relentless series that followed didn’t just raise the bar, it smashed through it, with price tags to match. 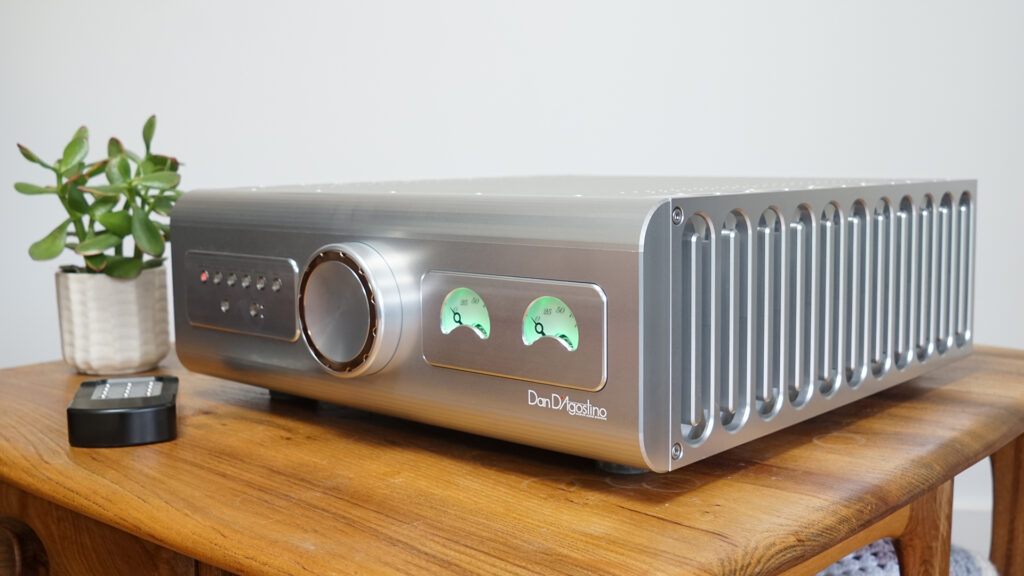 Milled heatsinks aren’t just for show and help keep things cool when the amp is in full flow. The backlit Breguet style multi-function signal meters can be set to indicate signal level, volume or balance and glow red when inverted polarity is selected

The Progression series represents the entry point into the Dan D’Agostino range, which if we’re continuing the watch analogy is a bit like buying your first Patek Philippe, as while a Calatrava is by no means cheap, it serves as a stepping stone into a level of luxury and refinement that many may never feel they have to move up from. 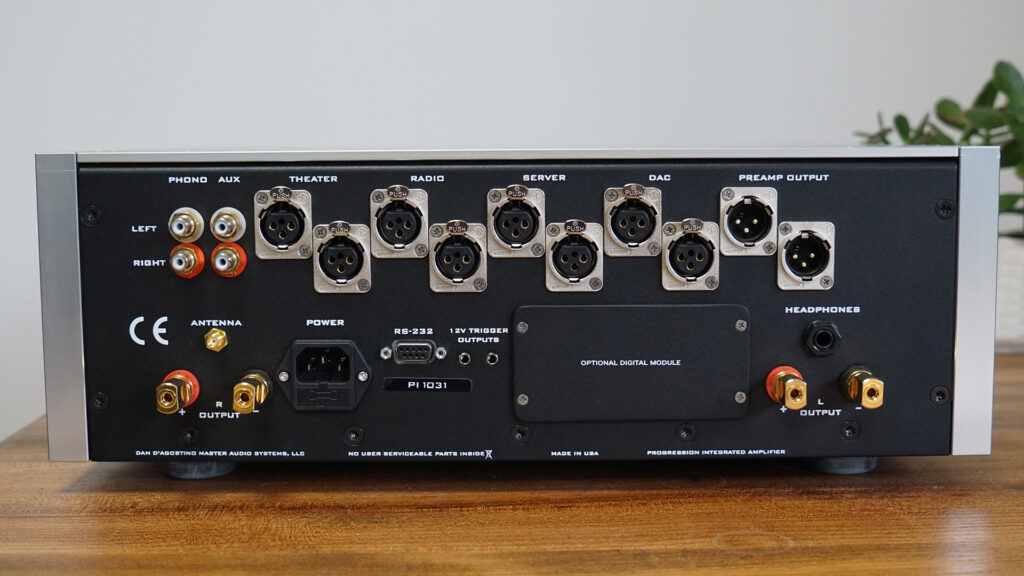 Six pairs of inputs spread across XLR and RCA sockets dominate the rear panel. Note the removable panel for adding a digital module upgrade. Headphone jack is a little hidden around the back

In standard fettle the Progression sports two sets of line-level (RCA) and four pairs of balanced (XLR) inputs alongside XLR outputs for driving an external power amp, underlining Dan’s and his customers’ preference for the superior performance of balanced connections. There’s also a 6.35mm headphone output on the rear panel, which may require a bit of scrabbling around when hooking up your cans.

At the amp’s heart, and what you’re really buying into, is Dan’s approach to amplifier technology garnered from over 40 years of experience. This includes his discrete, balanced, direct coupled Class AB circuit technology that’s married to a substantial output stage, delivering 200W into 8 ohms and doubling into 4 ohms. 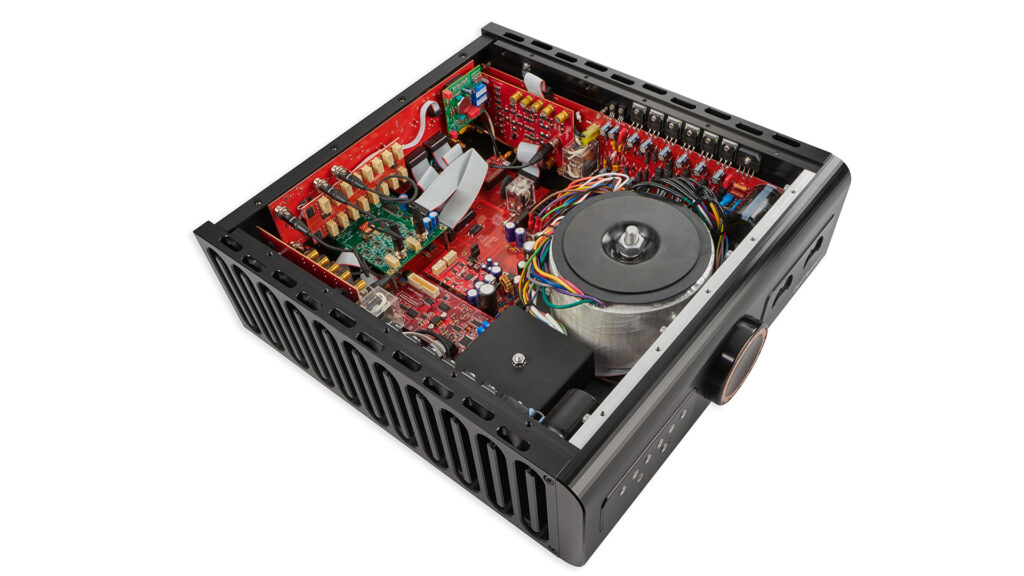 Sticking with the one box solution, D’Agostino also offers two upgrades to the Progression integrated with a moving-magnet/moving-coil phono board for vinyl fans adding £4k to the price tag and a digital module that brings the brand’s own streaming functionality plus optical, coaxial, USB and ethernet connections which costs £8k (so adding both would bring the price to £36,998 all in).

The amp’s switch gear feels simply exceptional to the touch. The rotary volume knob glides through its finely stepped range with reassuring audible clicks while the tactile input buttons glow red, blue and green when selected. You can also adjust balance in each channel via the equally well made remote control, which connects to the amp through a stubby bluetooth antenna attached to the rear panel for greater range, which makes you wonder why other manufacturers don’t also implement traditional remotes using Bluetooth.

Keen to make sure every owner hears their music at its best, there’s also a handy phase button which lets you invert the phase on the fly to match the music, by using your ears to see which sounds correct for each recording.

Unboxing the Progression highlights this to be one of the most user friendly Dan D’Agostino amps on offer because it can slot into most equipment racks, thanks to its standard proportions. What’s more you won’t need to hire in a beefcake to help you move it because while it’s no featherweight at 26kg, it’s half the heft of its Momentum sibling.

We opted for the base model Progression (if that’s not an oxymoron) as the most affordable stepping stone into the brand and to see how it fares with my reference gear.

Swapping it out for my Musical Fidelity M6 pre/power amps to drive a pair of Dynaudio Confidence 50 loudspeakers and the differences are immediately clear. While the MF pairing boast similar levels of power handling and amplifier topology on paper, they cannot match the Progression for sheer musicality and detail. Sure their grip on the big Dyns’ bass drivers is on a similar scale, along with their dynamism, but the emotion and sweetness the Progression brings to the table is what sets it apart.

Serving up a 24-bit/44kHz Qobuz file of the Rolling Stones’ Wild Horses via my Primare NP5/NP30 digital front end gets Jagger in full swagger. The way his voice is so closely mic’d to stay just shy of peaking is captured to sound so natural, it’s like you’ve been given a VIP seat at the mixing desk.

Channel separation and stereo imaging is as divine as you’d expect from an amp of this caliber, and it’s the mellow yet detailed delivery of the rhythm section that serves as the hook to pull you in. There’s a nuance to the amp’s timing that nails the way the band make smooth and relaxed sound as easy as Sunday morning, while clearly being at the top of their game. The music sounds rich and so effortlessly delivered it makes lesser amps appear as though they’re simply trying too hard in comparison. 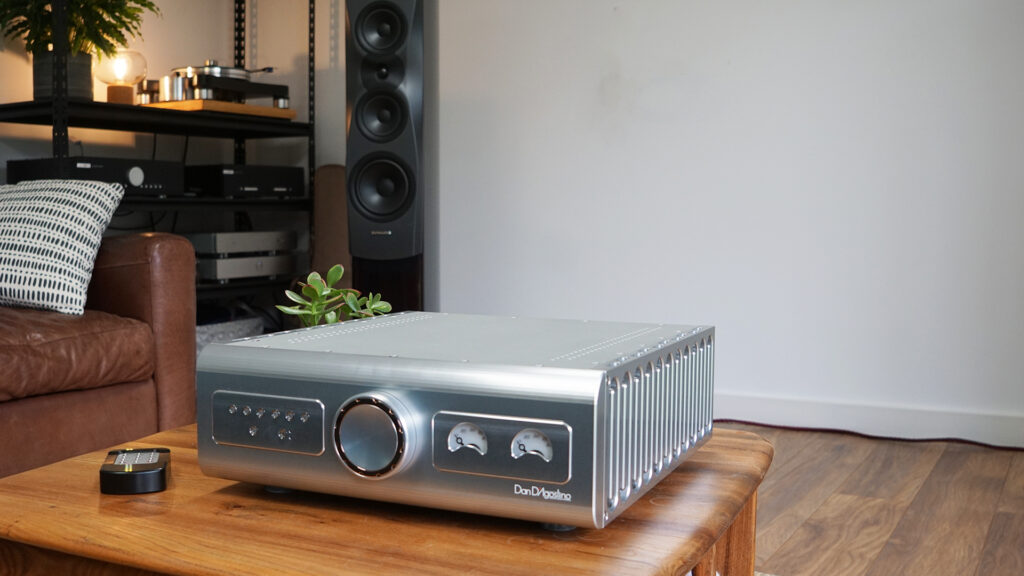 Perfect pairing, the Progression had no quarms driving Dynaudio’s penultimate speaker, the Confidence 50, to stunning levels of performance

Because of the weather

Sticking with the mellow vibe and a 180g pressing of The Doors’ L.A. Woman LP gracing my VPI turntable‘s platter is too hard to resist. The rain soaked intro to Riders On The Storm is so well rendered that my natural instinct is to reach for an umbrella. And the way the Progression lays forth Morrison’s double tracked lead/whispered vocal has an almost supernatural quality to it, underlining again how this amp really gets under the skin of the recording.

Sometimes the mark of quality is not how well a product delivers content that is accomplished, it’s how well it can present a lesser track to reveal the artist(s) and chemistry that’s hidden in the mix. For all it’s re-recorded backing tracks and overlaid guitars (due to issues with the master reels), Sandy Denny’s Gold Dust: Live At The Royalty remains an intimate capture of an artist at her most honest and open on the right system, and the Progression is ripe for the task. A few bars into I’m A Dreamer and the track’s technical history fades away as the D’Agostino lays forth Denny’s vocals with a vulnerability that few amps get close to. And as she cranks up the confidence on the second verse and the band kicks in, the scale of the music is pure concert hall drama that has all the excitement of the live recording. And this is what the Progression is all about, it’s not an in your face sounding amp, but instead lets the music do the talking by simply sound as it was intended.

While it’s clearly an amp for the well heeled, it’s also a delightful way in to Dan D’Agostino territory as what you get is one of the most accomplished and (compared to its brand brethren) unassuming super integrated amplifiers that you can accommodate day to day. Reassuringly though, it’s more than laced with the Dan D’Agostino DNA, which in a nutshell is Class AB amplification at its very finest, in a package that sounds every bit as good as the price tag.

Consider… Which Progression package is right for you including the phono stage and digital add-ons, although you can always add these further down the line

£24,998 not including optional phono board and DAC

Get all our Dan D'Agostino Master Audio Systems news and reviews