For some hifi brands, having a product list as long as your arm with new models being churned out more often than I change my trousers is what keeps their followers hungry.

But that’s not the Primare way. Instead this Swedish company prides itself on a sensible, slimmed down product portfolio with modular internal add-ons that are designed to stand the test of time, while being better tailored to its customers’ needs. For some years there was only one respected phono stage in the company’s arsenal, the R32. It garnered plenty of accolades before Primare, after taking its time over how it could be bettered, replaced it with two variants, the R15 and R35 models which are more dedicated to different types of system, with prices to match. 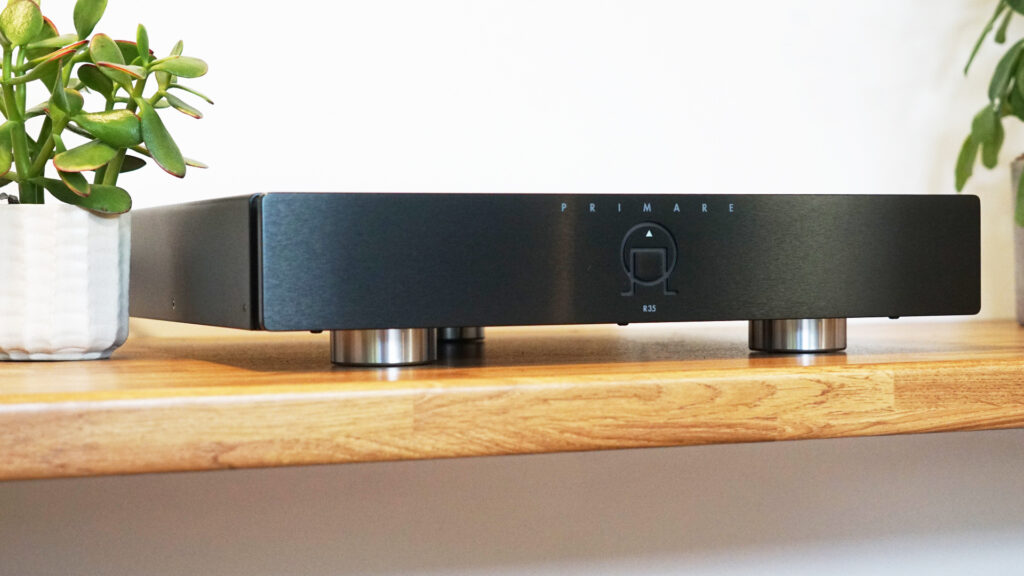 The R15 is similar in spec to the R32 it replaced, albeit in a slimmed down case and with added gain and capacitance settings, priced at £959.

The R35 however on test here at £1,470 ups the ante by some margin, despite looking deceptively identical to the retired R32 front on. But it’s round the back that gives the game away with what else it brings to the table. The first thing you notice is the addition of balanced outputs, which also offer greater levels of gain than their line-level RCA counterparts.

The R35’s capacitance options are the same as the R15, with MM settings for 100/200/300/400pF and 100pF or 1nF for MC cartridges. Impedance settings however are much more exhaustive with two settings for MM types and a whopping 21 settings for MCs (see Specifications section below), catering for 10 ohms through to 47 kohms.

A subsonic filter with improved circuitry completes the spec sheet. 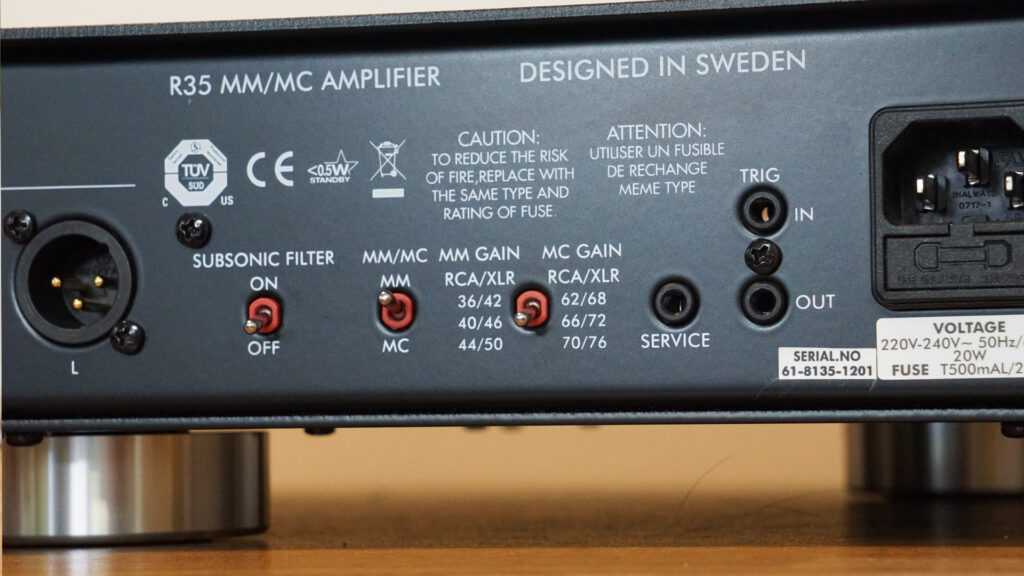 Cartridge type, gain and subsonic filter can all be selected from clearly labelled toggle switches

Unboxing the R35 and you know you’re in exalted Primare company. The casework feels solid and beautifully finished, from the solid front panel’s finely brushed finish to the trio of chunky feet that support the unit.

Upgrading the older R32, the R35 also sports a standby switch on its front panel that’s cleverly engineered into its etched fascia logo. This helps to keep energy usage down, by dropping consumption to just 0.5W from 20W when in standby mode, without the need for scrambling around the rear panel to find the on/off switch.

Not just a pretty logo, within the etched section immediately below the on/off light is a handy standby button that continues Primare’s clean design DNA

Spinning the unit around and the rear panel’s cartridge type, gain and subsonic filter toggle switches all make perfect sense at a glance. Where things get a little trickier is when you need to adjust capacitance and loading via hidden dip switches under two small covers for left and right channels. The previous model’s dial adjusters were much easier to operate, but then again, it had only a fraction of the settings the R35 offers.

Thankfully there’s a handy table within Primare’s user guide that’s a go to reference and if you’re a regular cartridge swapper, it’d be worth keeping this nearby. 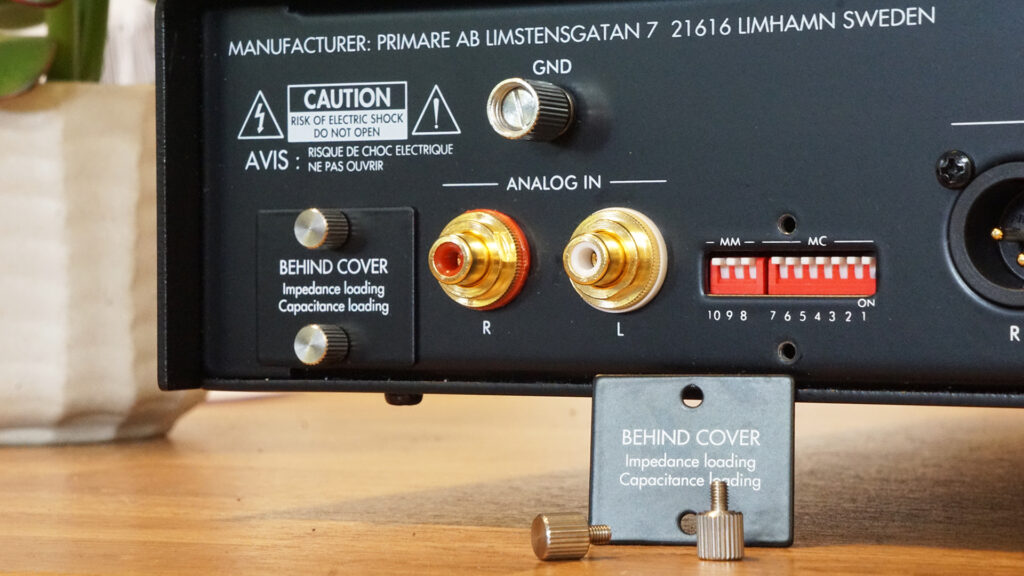 Settings for capacitance and impedance are made via banks of dip switches under dedicated rear panel covers. You’ll need to refer to the manual to ensure they are correctly applied

Alongside balanced circuitry and a greater arsenal of adjustments, the R35’s power supply has also been finessed. Out goes the R32’s R-core transformer making way for an upgraded toroidal type, with uprated components and greater shielding. 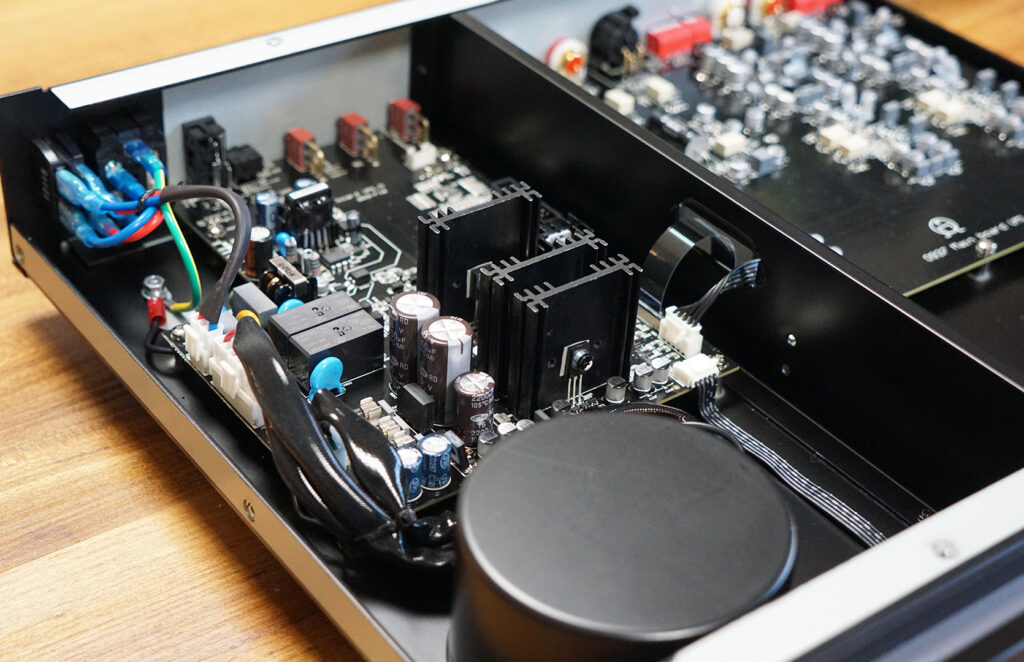 Confession time – I’ve owned an R32 phono stage for the last decade after pitching it head to head in a group test with similarly priced rivals, where it showed the competition a clean pair of heals, through its richly analogue character and superior bass performance to all that challenged it.

Back then my only question was why this wasn’t fitted with balanced connections, which seemed amiss on something of such high quality. While I was therefore hoping for these on the product that replaced it, what I wasn’t expecting was such a thorough update of its feature set, making the R35 (on paper at least) one of the most versatile phono stages on the market today. But in adding this extra tech, the question is has Primare compromised on the sonic experience? Put simply, the answer is no. 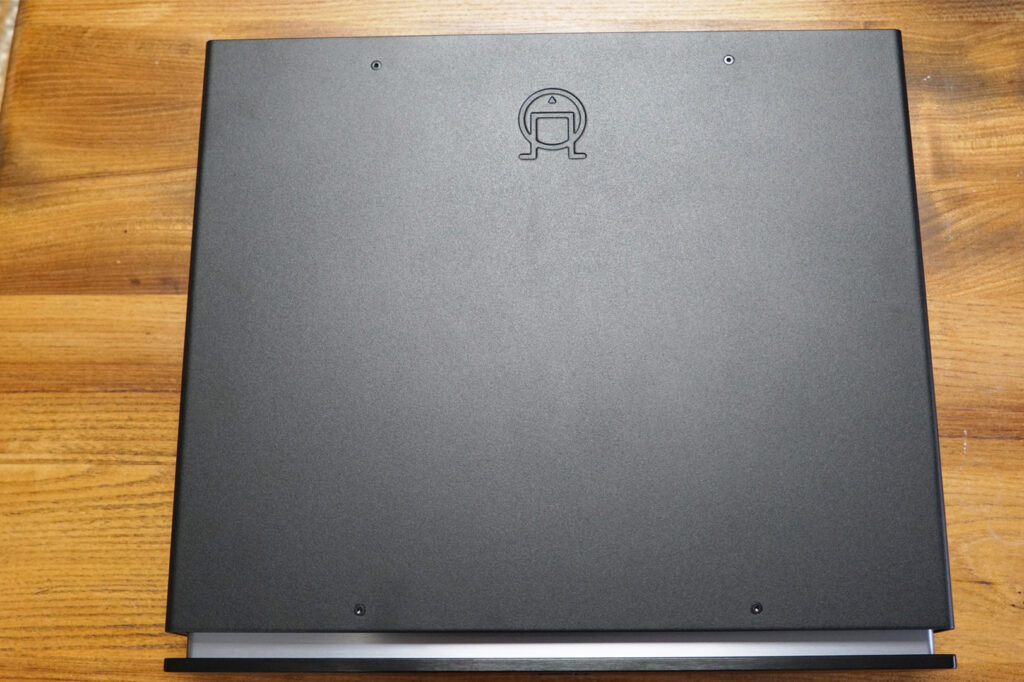 With Antony and the Johnsons’ 2005 Mercury Prize winning I Am A Bird Now LP providing the music, Anohni/Antony Hegarty’s delicate vibrato vocals are exquisitely captured by the Primare as it lays forth every tremble and sensitively held note, without making their voice sound overly forward. And as they reach for the high notes, the Primare keeps on giving, allowing the emotional vibrato of their delivery to really shine through with captivating honestly. Piano notes are equally well presented and in comparison to my legacy R32, there’s greater degrees of separation between them in the softer and slower passages of the track, showing how the R35 really gets between the layers of detail.

Shifting the tempo to Daft Punk’s Random Access Memories LP shows the Primare can really strut its stuff, or, to be more accurate, does not hold my vinyl replay system back from strutting its stuff.

The Benz Micro ACE pickup is a cartridge that’s full of life, however in the wrong hands with less neutral phono stages, it can be left sounding flatter than it should. Thankfully the Primare doesn’t limit its line contact stylus from pulling all the energy from this LP’s grooves. As Side A’s Giorgio By Moroder gets underway, I’m drawn in to Moroder’s conversation with the Primare imaging him opposite my listening seat with convincing depth and presence. And when the instruments kick in the Primare opens up the soundstage, populating it in scale, weight and layers of detail as though Giorgio has led me by the hand from bar conversation to boogie on the dance floor.

What the older R32 did so well and the R35 improves upon is marrying a delightfully analogue richness across the midrange and treble with precision and control in the lower frequencies. With many preamps, there can be a trade off as too much authority low down can starve other elements of emotion, while the richer emotional presentations of other rivals comes with a little too much bloom in the bass regions. The Primare however stands out as a master of both elements.

Swapping out the Benz for a Denon DL103R with its lowly o.25mV output and 100 ohm loading gets the Primare digging deeper into its feature set. Over balanced and line-level outputs the noise floor is reassuring low, while detail retrieval within a natural presentation remains the Primare’s calling card.

In the right hands the Denon can rival many pickups for musicality costing double and more, and the Primare is able to play to its strengths.

Spinning REM’s Belong from their 1991 Out Of Time LP lets the Primare underline why vinyl is still king for many. Bill Berry’s opening kick drum and percussion are delivered with enough force to suck the air from the room, even at moderate levels, while the timing and texture on Mike Mill’s sliding bass guitar notes as they descend and change pitch before abruptly being brought to a close is utterly lifelike.

In the R35 what Primare has done is focus on offering a product that can rival the best on spec alone, while not sacrificing what sets it apart from most at the price which is its sheer musical performance. It has depth and detail in spades, with an analogue character that underlines vinyl’s enduring appeal. It’s bass control is also class leading, and when you put all this together, the package is outstanding.

Consider… If you don't need such an exhaustive range of settings or balanced outputs, the cheaper R15 may be more suitable

Get all our Primare news and reviews