When it comes to hifi accessories, it can feel overwhelming knowing where to begin investing to bring tangible improvements to your set-up.

While cables are the obvious upgrade for many, isolating our hifi kit from external influences, especially for separates that rely on moving parts to generate sound, such as loudspeakers and turntables, is equally if not more important. 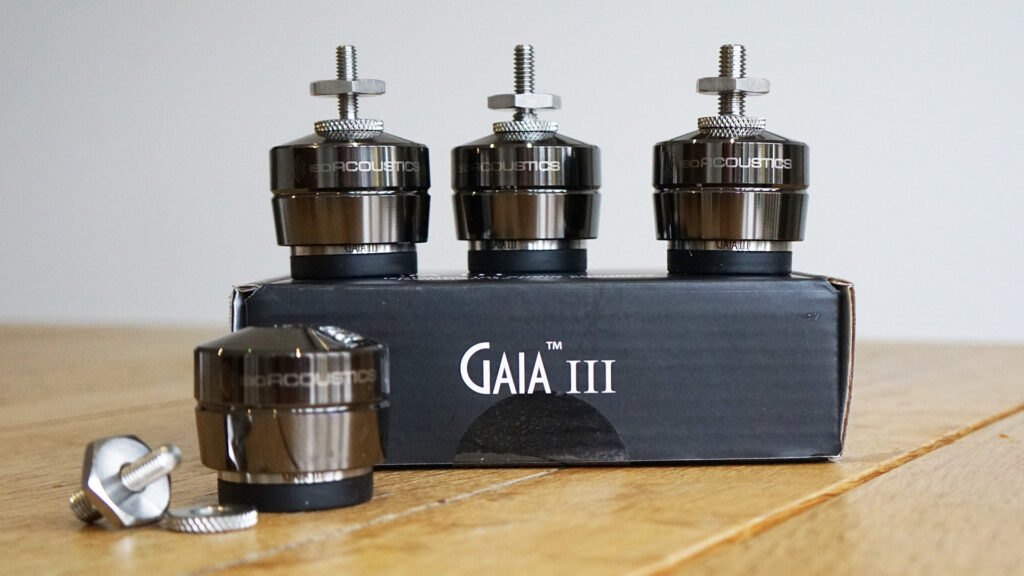 Connect four to improve your system

Consider a loudspeaker’s job in simple terms, it’s there to support its drive units’ movement while its cabinet remains rigid and avoids transmitting vibrational energy into external surfaces it’s in contact with. To achieve this, spiked feet are generally the go-to solution, to minimise contact between the speaker and floor while anchoring the former to the latter. But even with these installed, on your average home’s sprung wooden floor, vibrations can still be transmitted (albeit in a reduced capacity), meaning you’re not hearing your speakers at their absolute best, because some of their energy is leaking into their surroundings. And the issues don’t end here, as these vibrations can travel back into the audio chain, such as through floor mounted stands supporting turntables, transmitting vibrations all the way to a platter’s surface, where our cartridges are eagerly waiting to retrieve and interpret every vibration they sense.

Some manufactures try to overcome this, for example, by building isolation into a turntable’s chassis through springs or energy absorbing materials. For loudspeakers though, this is less common, with rigidity still being the name of the game, hence the aftermarket isolation offerings that have arisen in recent times, to help get the best from our air beating boxes.

Canada’s IsoAcoustics Inc is one such company, founded by Dave Morrison who brings with him decades of experience designing and building radio and TV studios, so he knows more than a thing or two about engineering products and environments for greater sonics.

Unlike many rivals, IsoAcoustics does not simply offer one do-it-all product and has instead taken great care in creating a range of solutions based on each user’s needs and equipment, separated into pro and home audio offerings. And to make choosing even easier, it has a superb online calculator that lets you select your kit, right down to brand and model (including for discontinued variants, such as my reference Dynaudio Focus 260 loudspeakers).

Alongside my speakers, I also popped in my legacy VPI Scout 1.1 turntable’s details to see what IsoAcoustics suggests in place of the deck’s standard cone feet, which look the part but are a bit of a design flaw sonically. 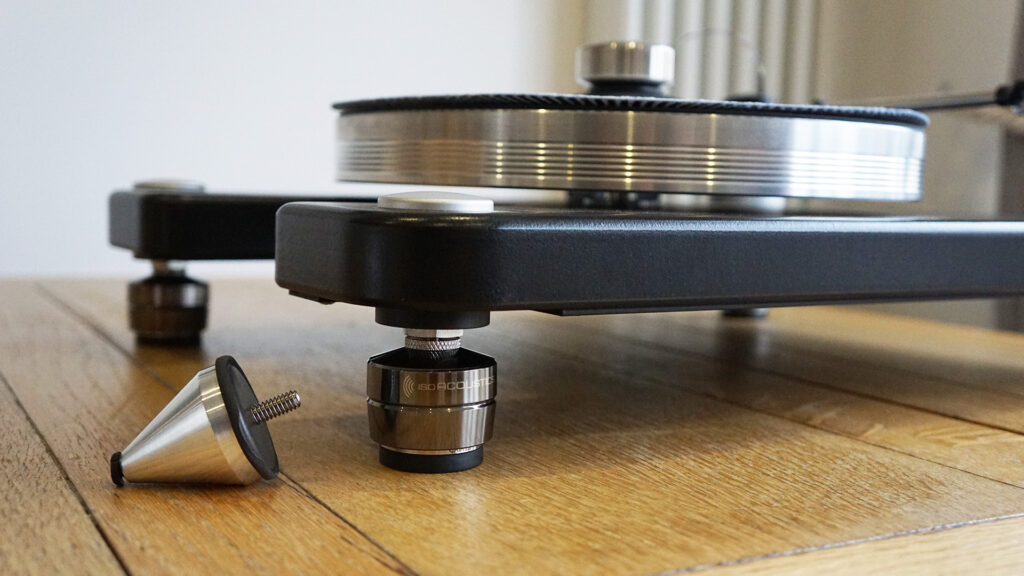 With both products weighing under 20kg (19.kg for each speaker and 14.5kg for the VPI), the answer was the same in the form of the brand’s GAIA III feet, which are built to support kit weighing up to 32kg, with the GAIA I and II models designed to hold more heft.

Inside each foot is where the magic really happens. The GAIA III’s internals consist of top and bottom isolators made from a resilient synthetic elastomer material and a connector that’s formed from a solid material. The isolation results from how the three parts work together through their shape, durometer (hardness) and material characteristics, to absorb vibrations and then dissipate this captured energy as heat. 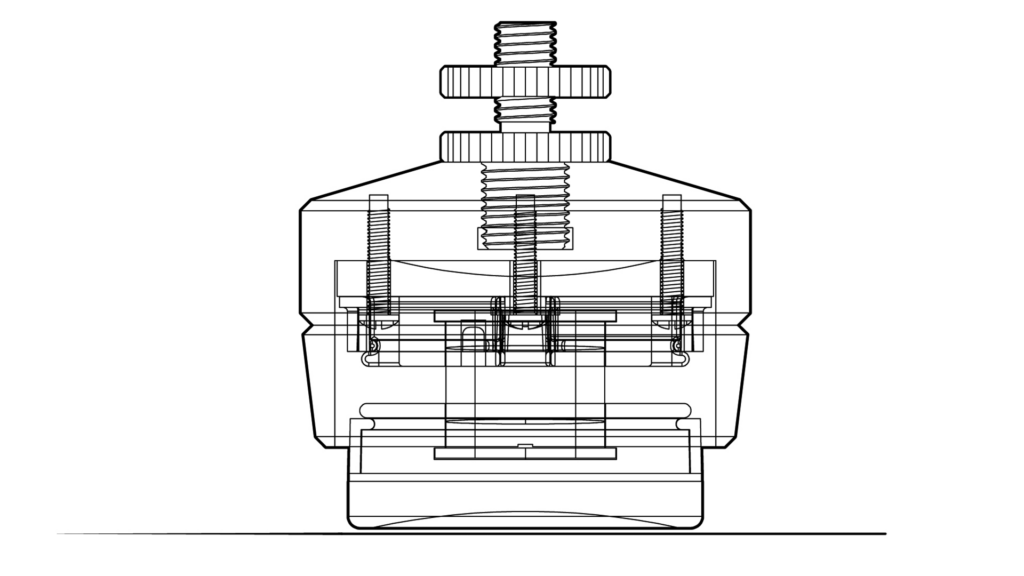 This exploded diagram shows the upper and lower elastomer isolators, joined by a solid internal connector

In the flesh the GAIA IIIs are nicely weighted products that scream quality. A quick squeeze reveals their isolation at work, as the lower rubber footed section travels a few mm into the uppers with the feel of a dense shock absorber. 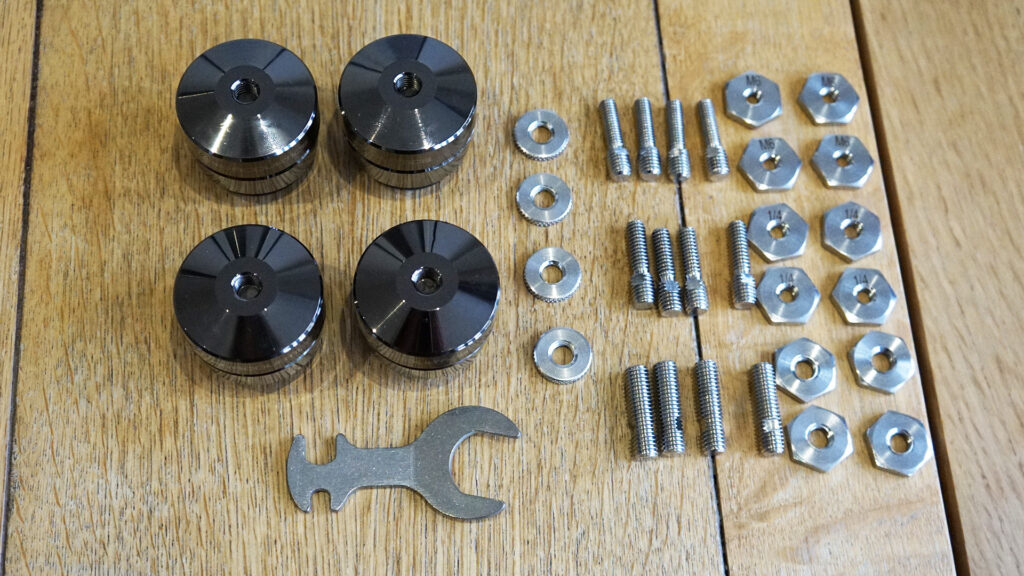 The GAIA III includes three sets of adapters and locknuts for M8, M6 and ¼ inch threads, with other options available on request

Their stainless carcasses are perfectly formed and the gunmetal finish is an ideal choice to complement, rather than compete, with whatever kit they are attached too. I can confess to having drawers full of aftermarket accessories, removed from service because they ruined the look of various components and thankfully the GAIA IIIs do the opposite, enhancing the looks of both my VPI and Dynaudios.

Installation is easy. First screw in the correct sized threaded rod and carefully nip it up using the supplied spanner against the flat cutouts in the thread. Then finger tighten a knurled lock nut before adding a hex nut onto the upper thread. You then use this nut to fine tune each foot’s height before pinching them up with the spanner for a secure fit. And if you get stuck, there’s even a dedicated ‘how to’ video on the brand’s YouTube channel. 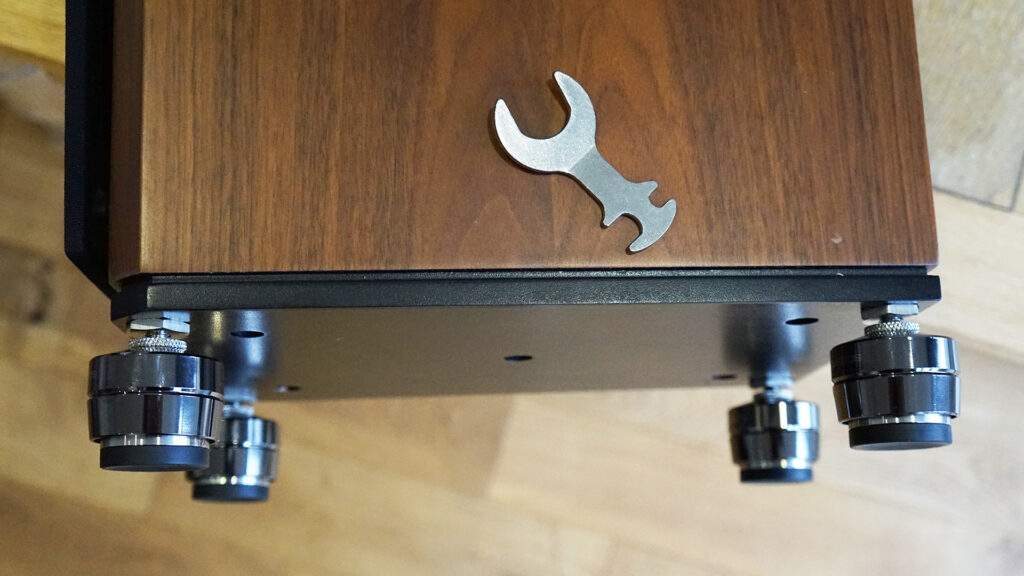 The GAIA III feet installed on my Dynaudios using the supplied spanner with the logos facing forward (to the left of the shot).  Their directionality results from the shape of the elongated isolators and connector

For my VPI, even at their lowest setting the GAIA IIIs raise the overall height of the plinth and platter which requires me to also pop some pads under the deck’s separate motor housing, lifting it to the same level.

Each foot’s front facing logo is subtle and almost invisible from a few feet away, but if this bothers you, spinning them 180º will hide the branding while retaining the GAIA III’s performance.

With the GAIA III feet fixed to my Dynaudios and sited on my 18mm engineered oak floor (which is screwed onto the house’s original floorboards) the GAIA III’s rubber undersides act like suckers, providing good adhesion.

Jumping in at the deep end with Massive Attack’s Protection streamed from Tidal at 16-bit/44kHz, right from the off it’s clear the difference the GAIA IIIs are making. These speakers don’t shy away from the lower frequencies and tend to err on the side of over delivering when given the chance. With the GAIA IIIs underpinning their performance, the opening thumps of the bass notes are delivered with greater precision and punch, compared to when heard with spikes installed. 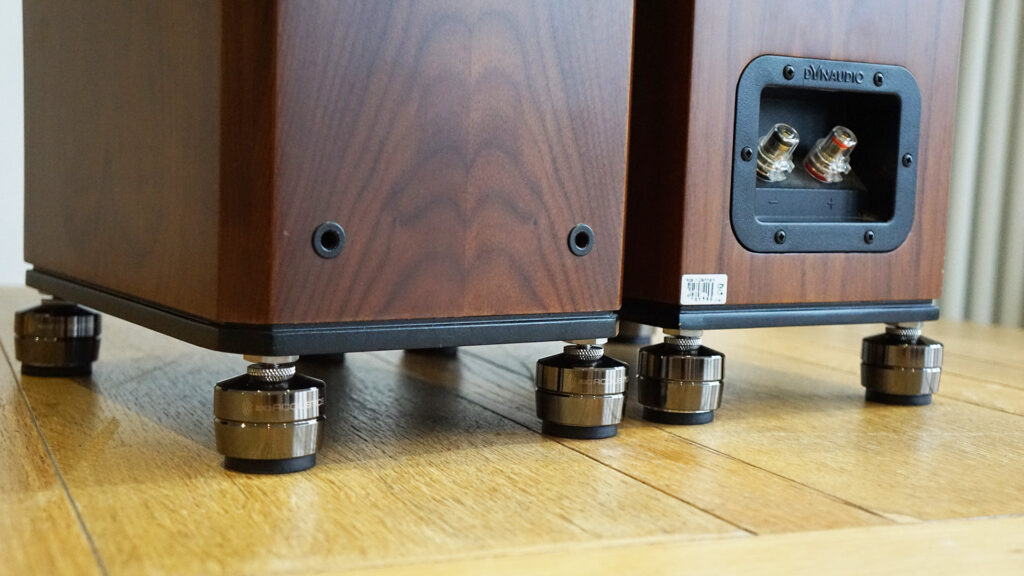 And it’s not just how the lower notes arrive that gets my attention, it’s also how they leave. Gone is any sense of overhang or bloom that can creep into the Dynaudios’ performance at over-healthy volume levels if their positioning is not bang on. It’s as though the GAIAs have taken my speakers to one side for a quiet word, telling them to up their game, by generating the same rich and deep low end I’m used to hearing but with greater grip.

This too brings with it collateral benefits, as there seems to be less leakage or smearing into the midrange on this track, which results in a cleaner presentation across the keyboards and Tracy Thorn’s empathetic vocals.

Changing the mood to Robert Plant and Alison Krauss’s The Price Of Love at 24/96 via Qobuz and the Dynaudios really start to breathe. These speakers are old hands at conjuring a deep and expansive soundstage, and with the GAIA IIIs in tow, there’s an increased sense of three dimensionality to the music. Twangy guitar notes sound better formed with greater body, while instruments are less holographic, as though a layer of transparency has been filled with richer colours. While Robert Plant’s voice is held back in the mix for Alison to take the lead, because of the texture that’s added I can better detect how he’s carefully releasing each note with just the right amount of delicacy to land his harmonies with perfection. 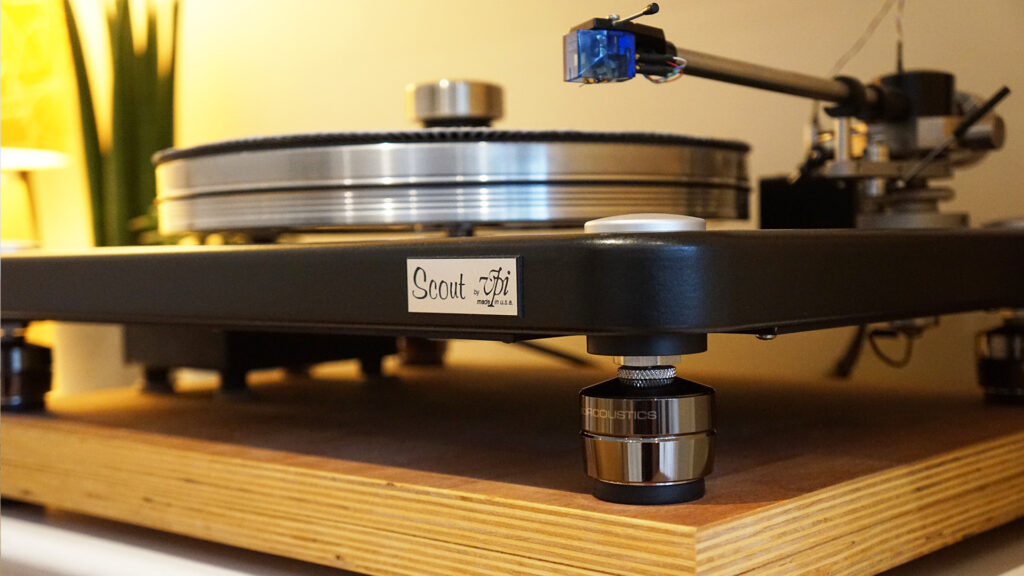 Bringing the VPI turntable into bat with an original Island ‘pink rim’ vinyl pressing of Solid Air, Danny Thompson’s low slung wandering bass line on the title track is given the freedom to roam deep into the soundstage, retaining its relaxed style while sounding that bit more purposeful, with clearer separation between each note as it intertwines with Martyn’s vocals and instruments across the track.

As someone who has flitted between suspended and non-suspended decks and their pros and cons for years, the GAIA IIIs add a degree of the best of both worlds to the VPI. The ease of use and sheer grip on the music is retained in full while its top end and midrange is opened up that bit more, elevating it to the next level and beyond its price bracket.

With the opening and title tracks from London Grammar’s Californian Soil in full flow, never have I heard Hannah Reid sound so real and energised in my system. My tweeters may be 20mm higher than usual due to the GAIA IIIs being that much taller than my Dyns’ standard spikes, but this distance is tiny in comparison to how far my GAIA III footed VPI and Dynaudios lift her voice to soar high into my listening room, as though the ceiling has also been raised a few feet.

While many rivals in the accessories space have seemingly similar offerings, IsoAcoustics GAIA III are a cut above average. Superbly built and finished, this is a quality product that will enhance your system’s sound and looks.

Adding them to loudspeakers will benefit your whole system, and for owners of legacy VPI turntables and the like, these are the upgrade we’ve been waiting for.

Ideal for… Floorstanding speakers and challenging listening environments, where bass extension is compromised. They’ll benefit separates too, and higher-mass non-suspended turntables are the ideal place to start

Consider… They’ll obviously raise the overall height of whatever kit they're sited under, so do your measurements first

Get all our IsoAcoustics news and reviews