Like mechanical watches, vinyl records and skin tight denim, valve amps were deemed doomed in years past as the ‘latest’ approaches took over with society’s ongoing technological evolution.

But like vinyl and traditional timepieces (and less so tight jeans) they’ve bucked the trend to find audiences craving the quality experience they offer, that’s worth going the extra mile for. 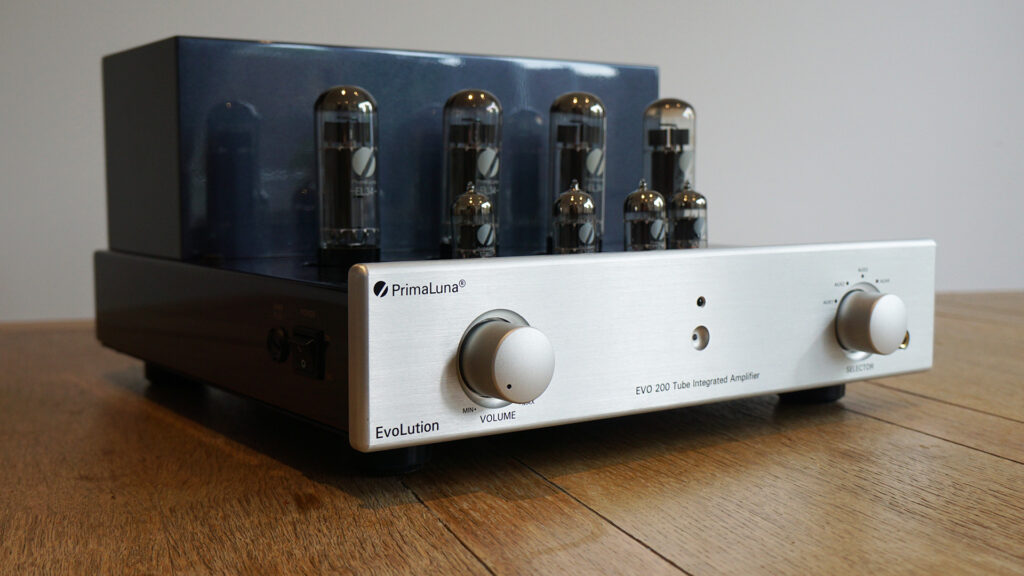 Simple yet elegant, PrimaLuna’s build quality is superb, and the amp looks equally attractive with its valve cover in place or removed

According to recent figures from the BPI, vinyl sales are set to overtake those of CDs this year and while valve amps are unlikely to do likewise for their transistor powered cousins, it’s safe to say their appeal remains thanks what they bring to the sound quality table.

Sisters of the moon

Founded in 2003 PrimaLuna (which means ‘first moon’ in Italian) knows this all too well and specialises in offering a range of valve amps alongside a valve powered DAC and hybrid integrated. 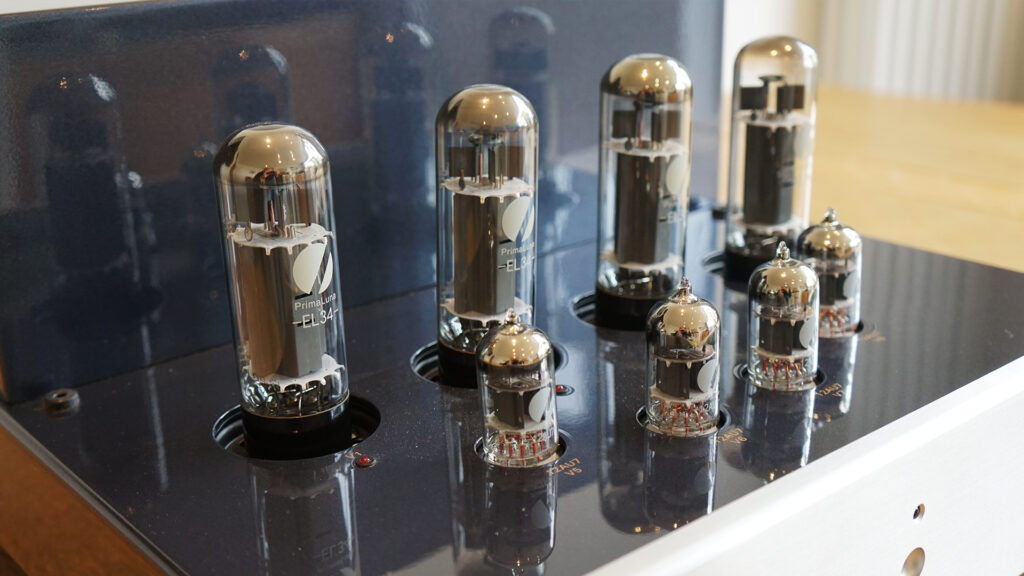 Four 12A7 valves (front) are dwarfed by a quartet of EL34s, which can be swapped with alternatives such as KT88 types, should you want a different sonic flavour

The Evolution 200 under review here comes in at £3,098 and is the second model up in the Evolution’s integrated models, sandwiched between the 100 (£2,498) and higher specced 300 (£4,298) with the extra outlay buying you a greater valve set, with upgraded wiring and internals.

That’s not to imply though that the 200 model is light on spec, as this amp is a testament to getting the basics right, from which everything else will follow. Its tube set is comprised of four EL34 valves in the output stage and four 12A7s for the preamp stage, all branded in PrimaLuna livery. In the valve world this pairing is of course well established and for a good reason, as it offers an ideal blend of power and flexibility. 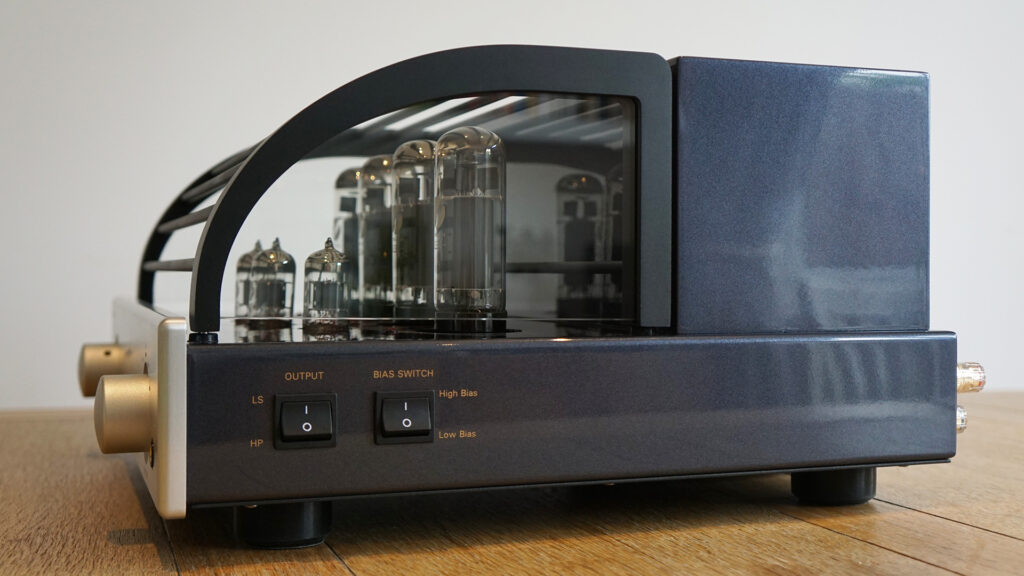 Right side panel hosts switches for headphone or loudspeaker outputs and high or low biasing, making valve rolling a cinch

In standard guise the Evo 200 claims a healthy 44W (into 8 ohms) with dedicated loudspeaker taps for 4 and 8 ohm outputs. Inputs are purely analogue, but there’s a good spread with four stereo, one home theatre bypass and a tape loop. Our demo model also came sporting a shielded phono stage bolted to its underside that’s crafted around the brand’s PhonoLogue moving-magnet circuit design which adds an extra £200 to the price tag.

Finishing off the feature set is a 6.35mm headphone socket and slimline metal remote control, making this a well thought out integrated package. 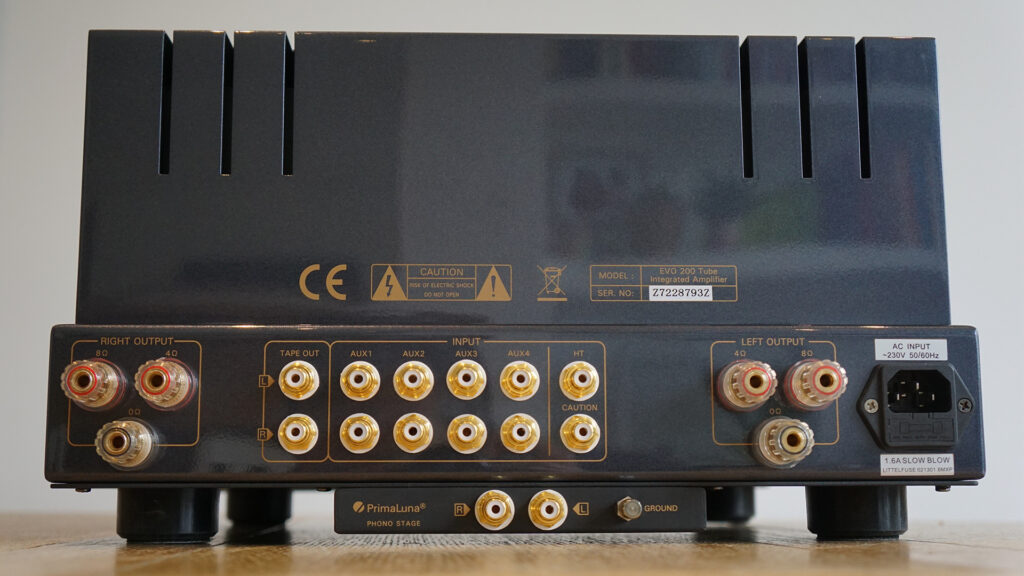 In the metal every detail feels beautifully executed, from its five coat finish steel chassis to its 24kg weight, partly accounted for by custom EI-frame toroidal transformers. Under the 200’s hood the attention to detail continues, with a motorised ALPS volume pot, Nichicon and DuRoch polypropylene and tinfoil capacitors, superfast Philips rectifier diodes and ceramic tube sockets.

As with most hifi, the results stem from how the circuit has been executed as much as the components within it and PrimaLuna has garnished its Adaptive Autobias approach on the 200, which uses a circuit outside of the signal path to monitor and continuously adjust tube bias to reduce distortion and increase efficiency. 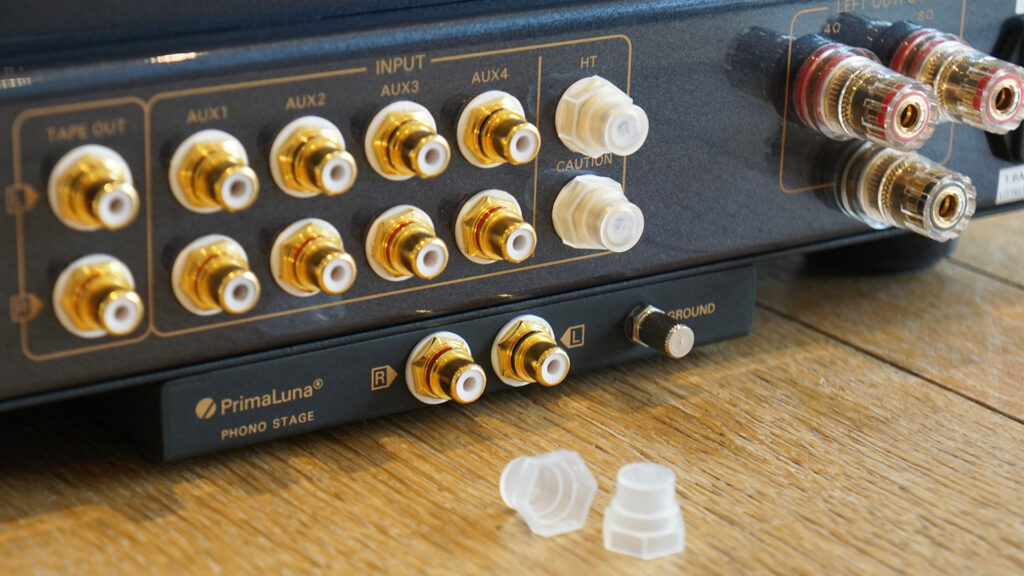 Optional moving-magnet phono stage sits in a separate shielded case that’s bolted to the amp’s underside. Dust caps are a great inclusion to keep the input sockets clean and protected when not in use

Flexibility for valve rollers has also been factored in thanks to a high/low bias switch, allowing users to pick the optimum setting should you swap out a the EL34s for a different flavour of valve, making A-B comparisons a doddle. 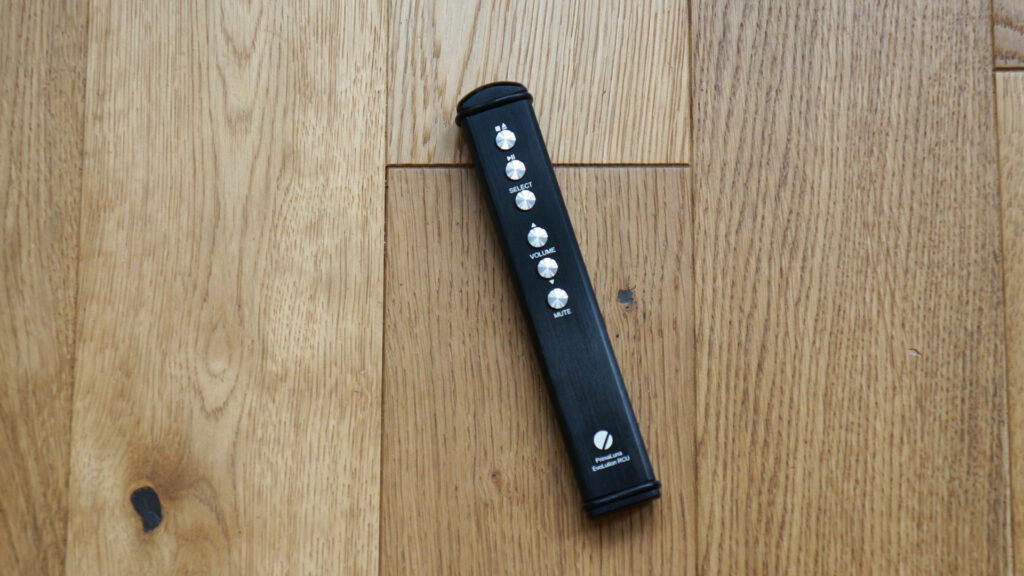 With the amp nicely warmed up and its 4 ohm taps feeding my legacy Dynaudio Focus 260 loudspeakers (via Musical Fidelity Tri-Vista speaker cable) which for me provides the best balance sonically, straight out of the traps the 200 immediately dispels the notion that valve amps can’t hold their own in the power and scale stakes when compared to their transistor brethren, by driving my 7×4.5m room with ease.

The legacy Dyns don’t present the easiest load and many low powered amps that have passed through my hands have been left wanting, especially in properly gripping their dual bass drivers, leaving them sounding flat and unrefined. But via the PrimaLuna, the Dyns’ lower notes sound lusciously rich and well formed, giving the amp a sense of weight and grip that stands shoulder to shoulder with many a solid-state monoblock.

Moby’s Porcelain streamed via a 24-bit/96kHz remaster from Qobuz through my Primare NP30 network player sounds dense and detailed, with gorgeous bass articulation that’s on the warmer side of neutral, making the track really come alive.

What the PrimaLuna also brings is a sense of fluidity to its sonics that takes you closer to the soul of each performance. At this price point, you’re almost spoilt for choice with amps that strive for accuracy, which can all too often err into sterility. Not so with the PrimaLuna, which is full of detail but also has an enviable organic nature that illustrates why valve amps, when executed to this level, remain so highly regarded – it just sings.

Hearing how the amp handles Mark Knopfler’s Redbud Tree track at 24/96 is hairs on the back of the neck stuff. The softly strummed acoustic guitar notes are presented with a gentility that shows how the 200 likes to reveal everything that’s going on in the performance, which makes the contrast of the geordie king of the six string’s electric guitar solo sound all the more arresting.

Being fed by my VPI Scout 21 turntable via a matching VPI/Nordost Weisline tonearm cable brings the amp’s unforced presentation to the fore. Tracy’s Chapman’s vocals on She’s Got Her Ticket from her self titled LP are rendered with just the right amount of natural reverb while the amp’s talent for imaging within a generous soundstage really stands out. On this track, each instrument is well defined and afforded plenty of space, with the rhythm guitar extending from deep in the soundstage, allowing the lead guitar to stand front of stage. The percussion also sounds free from overhang or softness arounds the edges, that can be typical of the valve breed.

While at a glance this amp may seem typical of the tube breed, what it really offers is a thoroughly modern and beautifully executed approach to valve amplification. The flexibility it affords tube tweakers combined with a sensible suite of connections also makes the Evo’s case as a consummate allrounder with class. The real icing on its cake though lies its sonics, which have plenty of power combined with an organic sound that you can easily live with day to day and long term.  If you’re in the market for an integrated amp under £3k, the Evo 200 needs to be at the top of your shortlist.

Consider… If valve amplification is right for you. There are plenty of rival at this price, but few offer this combination of quality and flexibility

Get all our PrimaLuna news and reviews