Being the smallest in the family often means you have to shout the loudest to get yourself noticed compared to your bigger siblings. And for Dynaudio, its new Emit 10 loudspeaker is not only the most petite domestic hifi loudspeaker the brand now offers, at £630 it’s also the cheapest, meaning it has even more to prove.

Thankfully despite being fresh to market, what it does bring to the table is more than four decades of hifi heritage, drawn from the Skanderborg company’s legacy across the pro, domestic and automotive industries which have been poured into the new Emit models’ development. 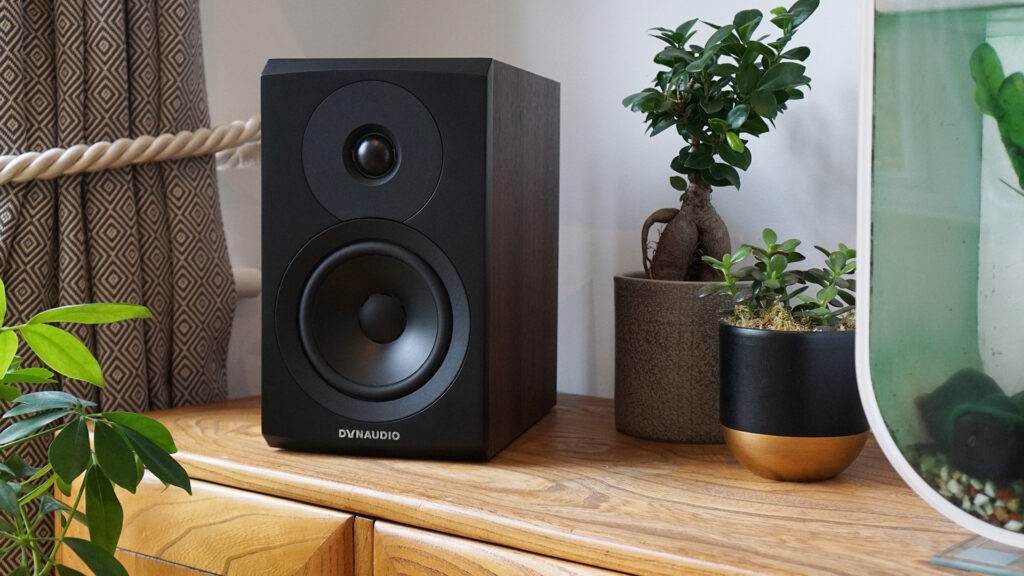 As the entry level offering in the range, the Emit 10 sits below its standmount Emit 20 brother and sports a smaller, narrower cabinet with a 140mm mid/bass woofer that’s lifted from the Emit 30 floorstander, instead of the Emit 20’s 180mm variant.

Like its siblings, the Emit 10 gets an in-house 28mm Cerotar tweeter inherited directly from Dynaudio’s more pricey Evoke range, which features a Hexis inner dome to help control the soft-dome’s high-frequency breakup modes and aid more even dispersion. You can see its subtle silhouette through the tweeter’s fine fabric when the light catches it, but it’s not obvious.

For extra oomph at the other end of the frequency scale, the speaker’s rear panel includes a fluted bass port, which can be fine-tuned using a supplied foam bung. 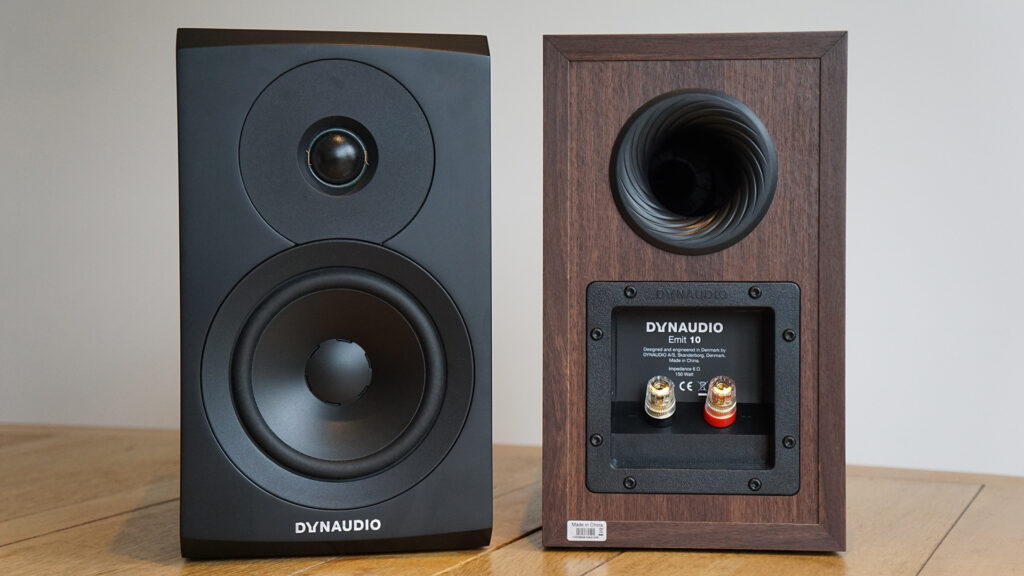 A single set of multi-way speaker binding posts makes for easy set up, with a fluted rear bass port for added low-end

As we also found in our review of the Emit 30, the build quality and finish Dynaudio has applied to the new Emit range is simply excellent for their price brackets. The clean curved lines of the Emit 10’s front panel combined with its overlapping dished driver surrounds are stylish touches, which you won’t want to hide behind the supplied front grilles for too long.

Even better than the real thing

We also specified our review models in walnut effect veneer which is pure class and you need to look closely to know this is anything other than the real thing. In fact, the Emit 10’s finish is so realistic, it looks and feels more natural than the actual real wood veneer of my reference Dynaudio Focus 260 floorstanders, which underlines how well Dynaudio is finishing even its entry level cabinets these days.

With no bi-wire options on offer, set up could not be easier and the small supplied small rubber feet are a cheap but considered inclusion, to keep the Emit 10s’ undersides blemish free. 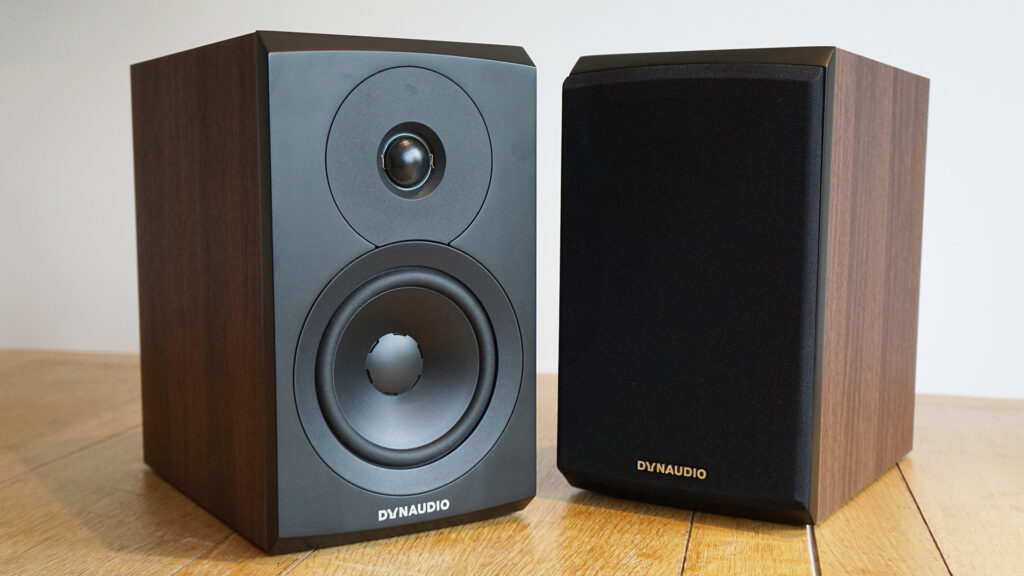 Clean lines and not a screw head in sight make the Emit 10 easy on the eye. Supplied grilles attach via hidden magnets

With grilles removed and sited on dedicated speaker stands, it’s clear that Dynaudio has managed to apply the same sonic qualities of the bigger Emit 30 floorstander we recently tested to the Emit 10s, just in a smaller serving. To use a wine analogy, you get the same character and quality, just by the glass rather than a full carafe.

That’s not to say the musical image they conjure is any way diluted. Streaming a 44kHz/16-bit ALAC rip of Ben Howard’s Black Flies from his debut Every Kingdom album through my legacy Cambridge Audio Minx Xi makes for an ideal pairing. The Emit 1os bring genuine depth and scale to the music, especially across the mid-to-low frequencies, that defies their diminutive cabinets. While on paper the speakers claim a frequency response down to around 64Hz, in my room they seem to go much lower while remaining fully composed. Unlike lesser bookshelf speakers, the Emit 10s never give the impression they’re rolling off too early or trying in vain to go lower than they can reach. Instead these speakers convey a sense of complete control over the lower frequencies in this track, articulating them with natural punch, pace and texture.

Moving up the frequency scale, where the Emit 10s really excel are in their rich midrange presentation. Streaming Future Islands’ remix of James’s Beautiful Beaches (which by the way is so much better than the original production, that fans of either band should hunt this version out immediately) via Spotify Connect and the Dynaudios flesh out the track’s keyboards with dense atmospherics that fill my 4x5m listening room ease. Soundstage depth is also an impressive part of the Emit 10 package, pushing Tim Booth’s echoing vocals deep into the mix as though he’s projecting them from a metre or so behind the actual speaker plane.

At Audiograde we believe hifi needs to be auditioned in real world listening environments. And your average bookshelf speaker buyer is just as likely to forego dedicated stands and do as the label suggests, by parking these speakers on a shelf or cupboard, next to whatever else takes their fancy. Thankfully it seems Dynaudio also shares our thinking and has engineered these speakers to be flexible housemates. Experimenting with the Emit 10s in a range of positions, including close to rear walls and nestled between books doesn’t fluster them in the slightest. With one speaker on my sideboard and the other a few inches higher on a nearby bookshelf, the piano in Dodgy’s Grassman streamed at CD quality via Tidal sounds as clear and well imaged as it does with the Emits mounted on dedicated stands. And when the explosive, instrument-packed chorus kicks in there’s no obvious breakup in the stereo image and instrument separation, highlighting (as we also found with their bigger Emit 30 brothers) this range’s talent for maintaining focus even when listening off-axis.

With the Emit 10 Dynaudio has done it again, by offering an affordable loudspeaker that’s been carefully packaged to ensure the quality is there where it counts. You are getting what should be a higher priced product, but presented in a modern looking (and highly convincing) vinyl wrapped cabinet to bring you more actual speaker for your money.

The Emit 10’s musical delivery is smooth, detailed and with an articulation that makes these more versatile than many bookshelf rivals. Highly recommended.

Consider… Adding a subwoofer, if you crave more bass extension