When a company like McIntosh, with a reputation for building some of the most respected and recognised amps on earth pours its knowhow into a headphone amp range, you can expect the outcomes to be a cut above average.

Priced at £2,995 the MHA200 is the middle model of the big Mac’s three strong can amp range, with each model tailored to different audiences and user needs. At the affordable end sits the pocket-sized portable MHA50 which costs £895 and comes loaded with inputs for mobile and desktop devices to feed its internal DAC.

While at the top of the tree is the £6,000 MHA150, that sports a much more sophisticated DAC with analogue circuitry similar to the MA7200 we recently reviewed, in a case that bears the classic McIntosh hallmarks of blue VU meters and gothic backlit faceplate.

What makes the MHA200 unique to the range is its use of tubes within a wholly analogue design, which pitches it firmly at valve purists, with few rivals (Icon Audio springs to mind). 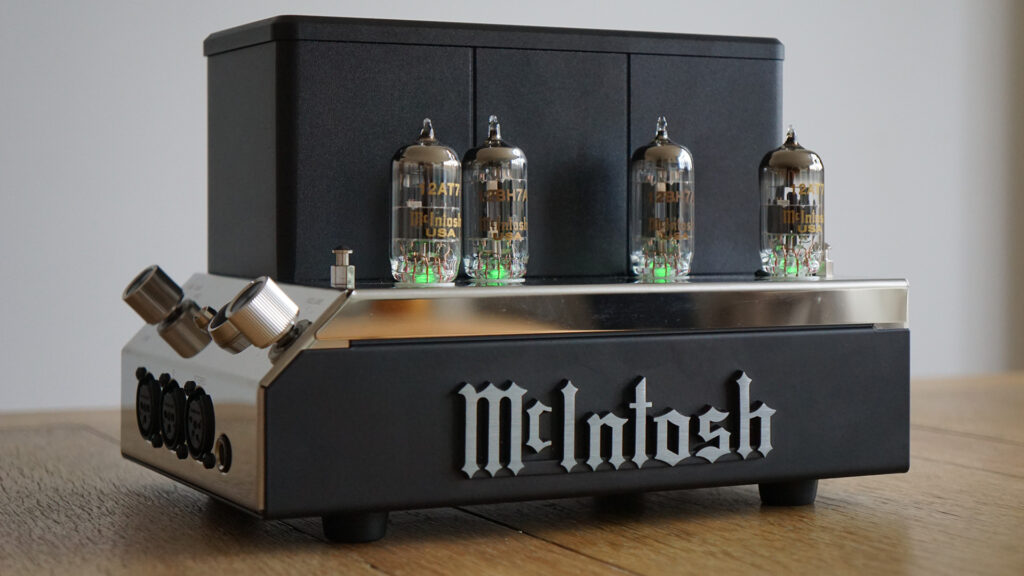 Green glow the luscious tubes, well it is McIntosh! Front panel controls are limited to standby alongside rotary dials for volume and load selection

Out of the box the MHA200 is surprisingly heavy in the hand, weighing just shy of 5kg, which is accountable to its sturdy stainless steel case supporting a trio of heavy duty transformers. Despite its modest dimensions at just 156mm wide, the 200 screams quality from the solid casework to its beautifully branded tubes (which as you’d expect, glow McIntosh green when powered up).

The MHA200 is a Class A push-pull, twin triode design, with a valve set comprised of two 12AT7s to amplify the incoming audio signal, before a pair of 12BH7As then take over by providing the muscle to drive its headphone outputs, with the latter chosen for their low distortion characteristics. The output transformers (one for each channel) are configured using McIntosh’s ‘unity coupled circuit approach’, which is based on the same technology McIntosh has been using since 1949. As denoted by their top panel legends, these transformers can be set to one of four impedance ranges at 32-100, 100-250, 250-600 and 600-1,000 ohms via a front panel rotary knob. The third transformer is a toroidal type, providing the power. 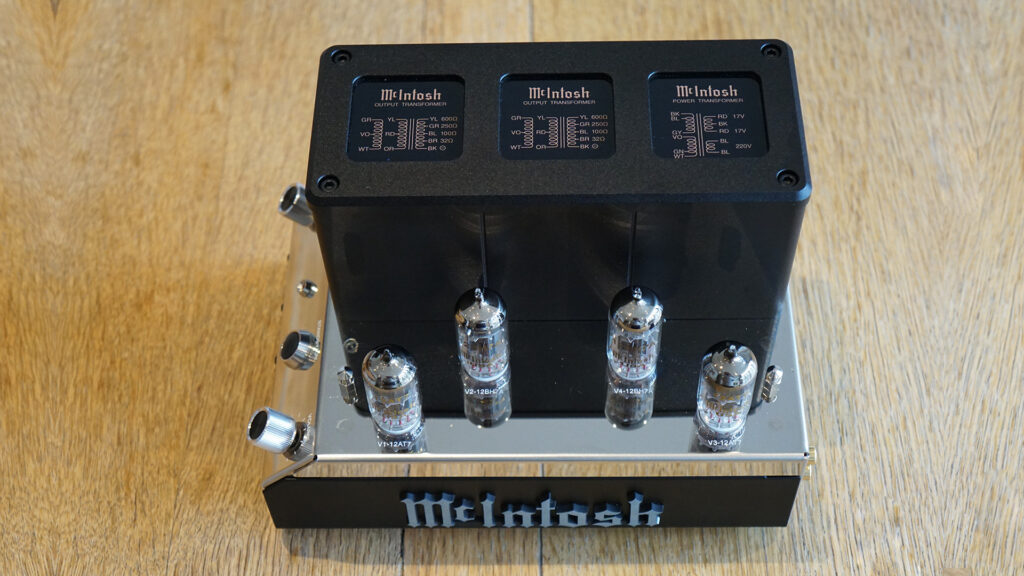 Denoting its pro audio roots, the legends on top of each transformer reveal what’s going on inside

As you’d expect at this price point, connections on offer cater for both single ended and balanced inputs and outputs, to ensure your partnering kit isn’t held back. Front panel sockets include a standard 6.35mm stereo jack, a four-pin balanced XLR connection and separate three-pin balanced XLR sockets for dedicated left and right channels. And while the rear panel offers both balanced (XLR) and single-ended (RCA) inputs, given there’s no input selector, you should only connect one type at once. 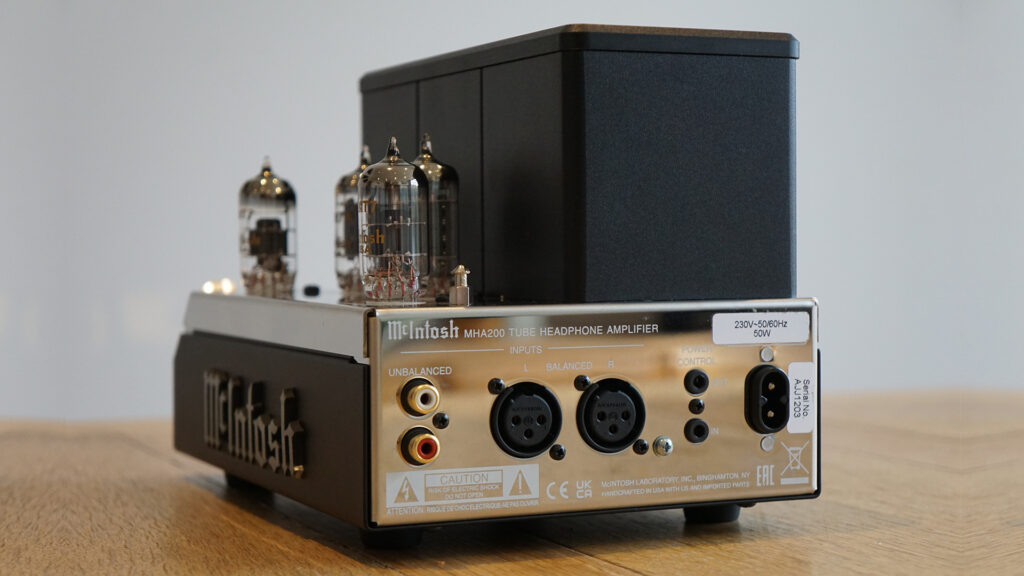 Top quality connections include balanced and single ended sockets, with trigger connections to incorporate the MHA200 into a bigger McIntosh system

Powering up the amp brings the valves to life, denoted by a dozen flashes until they reach operating temperature and their green glow turns static. While it may seem at odds to partner a premium headphone amp with more budget orientated cans, at Audiograde we believe that premium hifi should be flexible enough to partner products at a range of realistic price points, to allow upgrade paths as our systems evolve.

With this in mind, my longstanding over ear AKG K242 HDs that are the go to workhorses for many a recoding studio, are pressed into action via the MHA200’s stereo jack, with its transformers set to the 32-100ohm setting, to serve their 55ohm load. 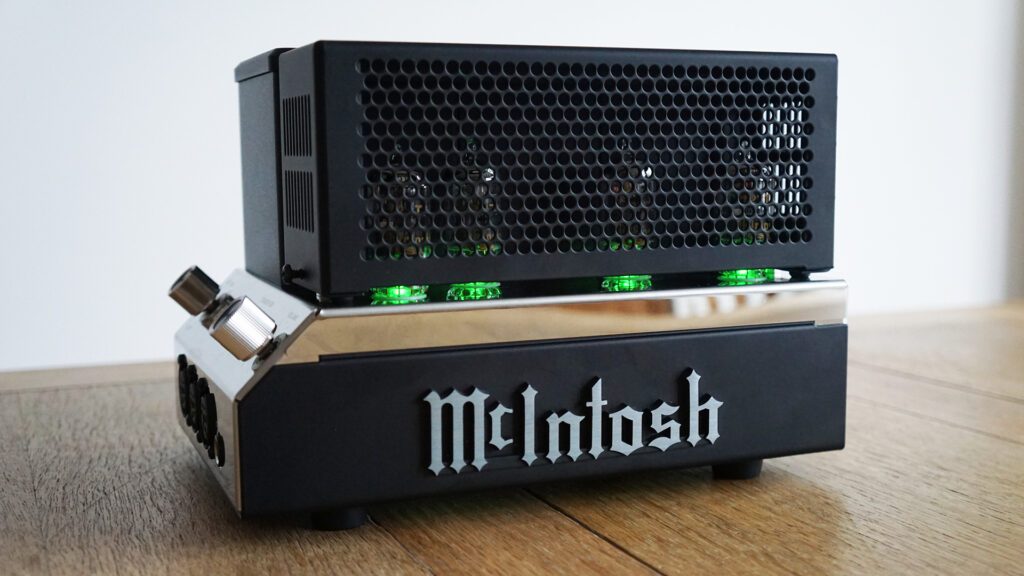 With optional valve cover in place to protect its precious glassware

Connected directly to my Primare NP30 network player via balanced interconnects and The War On Drugs’ Thinking Of A Place’ via Qobuz at 24-bit/44kHz from our Contemporary Prog playlist demonstrates what the McIntosh can muster from even these modest cans. There’s a lush warmness to the music that brings strings to life in way that makes my usual reference headphone amp (a Musical Fidelity M1 HPA) sound somewhat sterile in comparison. And when the vocals kick in, the atmosphere around them is laced with real world nuance as Adam Granduciel’s Dylan-esque vocals fade from the mic with breathy realism. The opening keyboards sound panoramic and the whole track is presented with degrees of depth and separation that showcase how well this amp’s internals have been engineered.

Aware I’m pushing the AKGs as far as they can go while the McIntosh is barely out of first gear, what this highlights is how the MHA200 is a sympathetic performer, that prefers to play to its inferior partnering equipment’s strengths than overly expose their weaknesses, as many hi-end audio examples tend to do. 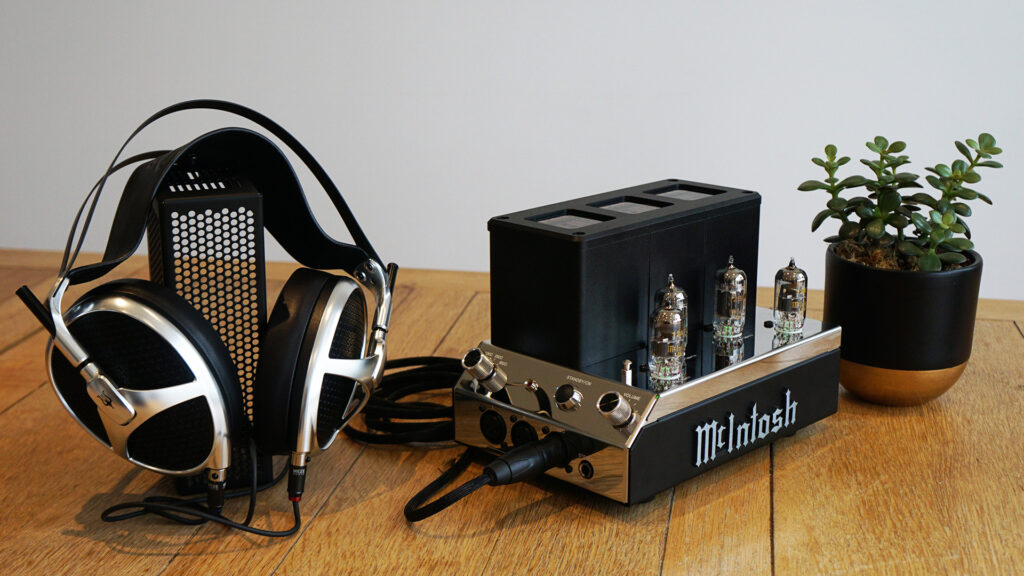 Upping the ante with a pair of Meze Audio’s recently launched Elite Isodynamic Hybrid Array over ear headphones lets the 200 really come into its own. Serving up a 24/96 file of Secret Machines’ Talos’ Corpse and the kick drum’s thunderous echo extends markedly further back into a richer and much deeper soundstage as the McIntosh relishes the hardware upgrade. The rich texture I’d noted in the earlier tracks is still present, but now sounds layers deep across every note, showing how satisfyingly this amp can rock.

Shifting the tone to a more delicate offering with Laura Marling’s Master Hunter from her Once I Was An Eagle double LP on my reference VPI Scout 21 turntable with Benz Micro pick-up feeding a Primare R32 phono stage, highlights that the McIntosh’s line-level inputs don’t come up short when compared to their balanced counterparts. Of course given a choice I’d generally opt for balanced providing, but knowing how the McIntosh caters for both types of signal makes for a more versatile package. Thankfully I’m not left disappointed, as the way the McIntosh captures the percussion’s jazz infused rhythm is one of those moments that stays with you and has you going back for more. The detail and realism around every symbol and drum skin strike sounds so full of life it’s as though I’ve transcended into the recording studio. What’s more appealing though is how the MHA200 ties this detail into the melody of the piece, rather than overload your senses – it’s a fine balance, that few strike so well.

In many ways this is one of simplest and most focussed products McIntosh has produced and gets to the essence of the brand, by doing one job and doing it to the best of its ability. Although not cheap, the MHA200 is endlessly enjoyable with a rich, balanced and powerful sound, that’s is more forgiving than most rivals. Add to this the stellar build quality and ability to cater for a wide range of headphones and connections and the MHA200 is a benchmark product that’s highly recommended.

Ideal for… Headphone users that prioritise build quality and musicality, it's a perfect package

Consider… The lack of a DAC makes this pure analogue and with limited inputs, but for many that's what will make this amp so appealing

Power to the people