British audio specialist REL Acoustics produces more sub-bass speaker systems than any other brand I know, crafting increasingly more powerful and exquisite designs with each new model. The company has been making dedicated sub-bass designs since the birth of home cinema in the 1990s. Over the last decade or so it has also been making waves in the audiophile world with increasingly more flexible sub-bass solutions that can be used with an under-performing stereo setup, or as a useful tool to help overcome a challenging room acoustic that’s a bit bass light.

The HT/1205 MKII sub-bass system is a prime example of REL’s commitment to moving things forward. This latest version updates the bass-making original with a new cabinet design and driver material that results in better power handling and output level to play 50% louder than its predecessor.

Part of the company’s HT series, the HT/1205 MKII (or Serie HT/1205 to give it its full name) is a movie-focused active sub-bass speaker system that’s also known as ‘The Cannon’ by the REL Acoustics team. The company claims that this updated MKII sub-bass model is so fast and responsive that it can also handle music spectacularly well, making it a versatile add-on for anyone wanting to beef up a high-quality music system as well as a home cinema setup. 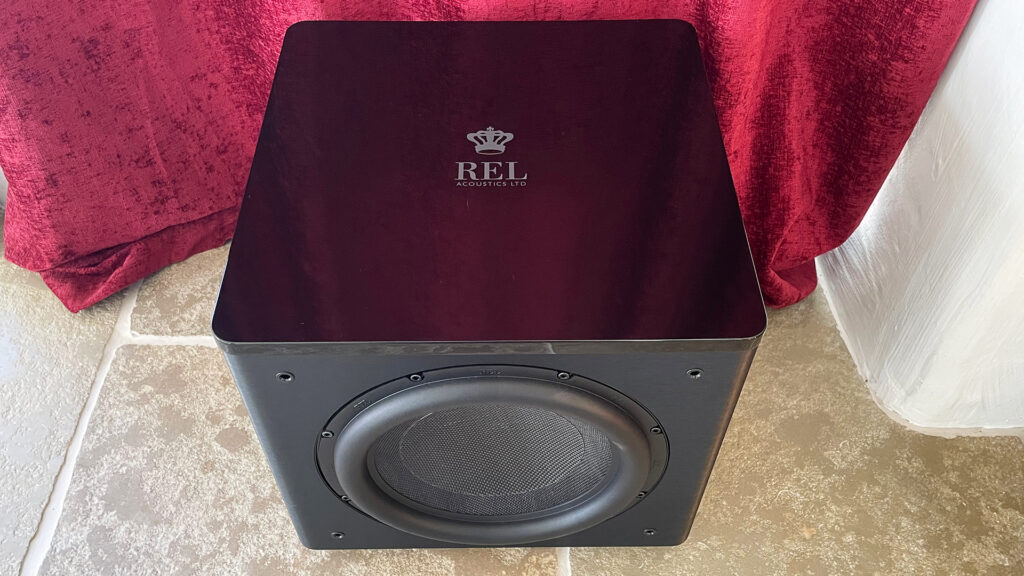 Although not huge by the standards of some REL models I’ve experienced, the HT/1205 MKII is larger than the T/5i model that was swapped out of my system for this review. The HT/1205 MKII sits one rung down from the top-of-the-line HT/1510 Predator, priced at £1,799, yet at less than half the cost is much closer in specs than the price difference suggests.

The HT/1205 MKII measures 413 x 387 x 438mm (HxWxD) and weighs 19.6kg, which is around 2.5kg heavier than the 1205 original. The MDF cabinet is internally braced to ensure that it’s acoustically inert, and the new 12mm -thick high-gloss top plate serves to damp internal vibrations further. I love the grainy vinyl finish on the sides of the cabinet that elegantly wraps around the curved edges on each of the sub’s four corners. The finish is sophisticated and modern, and a welcome style shift over classic high-gloss (and difficult to maintain) designs I’ve encountered from the Serie S and Serie T lines.

Inside the HT/1205 MKII sits a 500W Class D amplifier. Although this is rated the same as the model it replaces, REL says that the MKII is capable of delivering much more. Larger magnets and upgraded suspension mean that the 12in (300mm) long-throw, forward-firing carbon glass driver is even more agile and pistonic and it’s these upgraded components that help the HT/1205 MKII sound twice as loud as its predecessor. 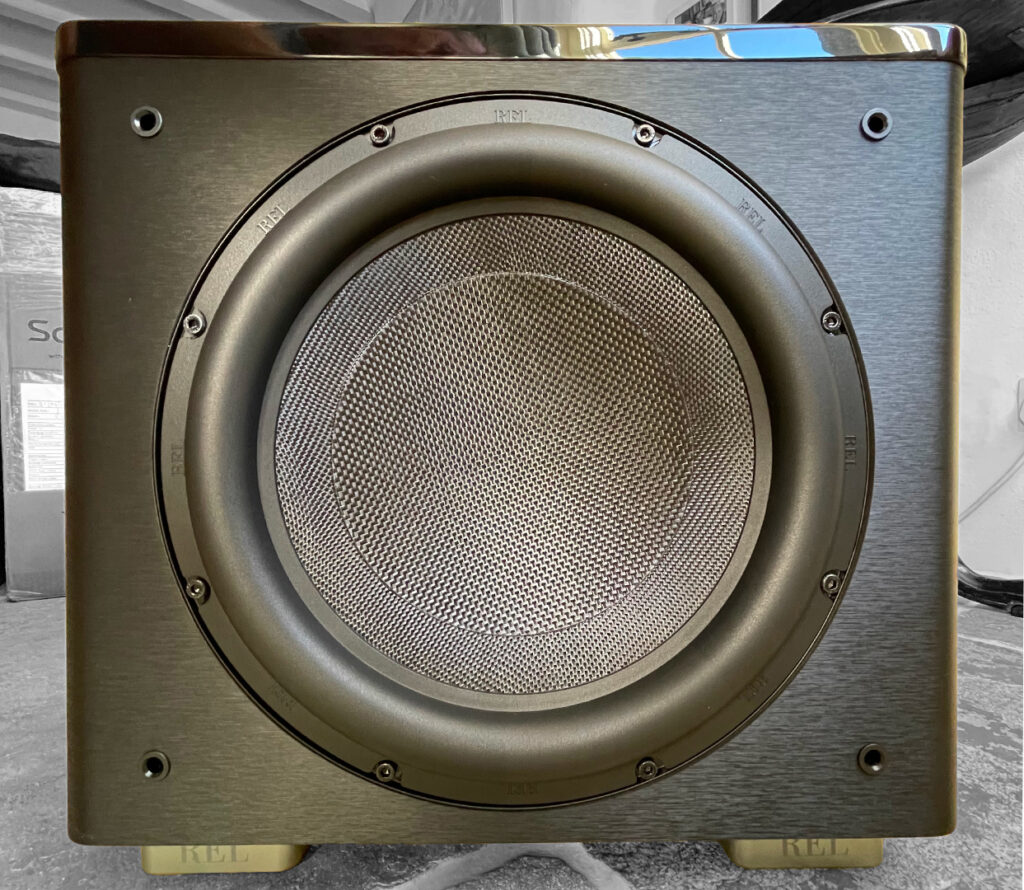 There’s no smart app to integrate any of REL’s sub-bass systems from the comfort of your sofa. This could be seen as something of an oversight in today’s connected world, but any such development would undoubtedly add to the overall cost, and add a degree of unnecessary tinkering. Instead REL’s sub-bass systems are fit and forget designs once you’ve gone through the integration process and if you’re in any doubt about the setup steps, there’s a series of helpful guides on the REL’s website to take you through ‘how to connect’ and ‘how to tune’ procedures alongside video blogs by head designer John Hunter.

The HT series ditches the high-level input stage found on many of the company’s previous sub-bass designs. Audio connections from the amplifier are via line-level RCAs including one designated for LFE (low frequency effects). Controls run to level and variable crossover, and there’s a reversible phase switch and standby mode. It looks as though REL has added idents to the level and crossover controls, which makes fine tuning feel more reassuring when integrating the sound output to your room and speakers.

There’s no cable supplied for wired connection so you’ll want to factor one in. Plus, if you want to connect wirelessly you’ll need to factor in REL’s HT Air module at £110, which connects a receiver to the low-level input at the back of the sub for a high-quality, zero-compression audio signal from the sending device connected to the amplifier. 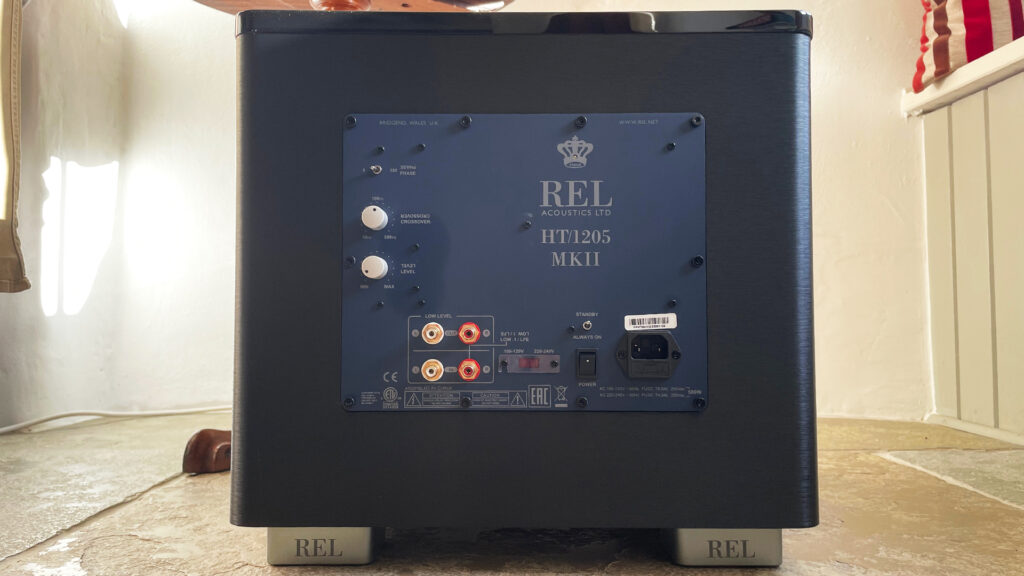 The best position for a sub-bass speaker in my living room is to the left side of the room just behind the plane of the speakers. I like to see the speaker drivers on show on my Dynaudio X38 floorstanders, and to match I also remove the grille to show off REL’s textured 300mm carbon glass drive, which looks a lot better than the non-descript black cloth speaker cover that’s supplied. I also like to make sure the sub-bass driver is firing directly towards the listening position. Lastly, I add a little toe-in sympathetic with the toe-in angle of the left channel speaker it’s placed next to.

Any fuss and attention to placement are more to do with aesthetics, and I like to make sure speakers look right in the room rather than for any solid acoustical reason. It’s a psycho acoustic matter, I know, but I often feel a system sounds better if the speakers and cables are arranged in a pleasingly neat aesthetic — just as a freshly valeted car often seems to drive better than a dirty or untidy one.

Of course, REL’s sub-bass systems are entirely flexible when it comes to placement, and I’m confident that the HT/1205 MKII can be integrated with any speaker system wherever it’s placed in a room without issue. 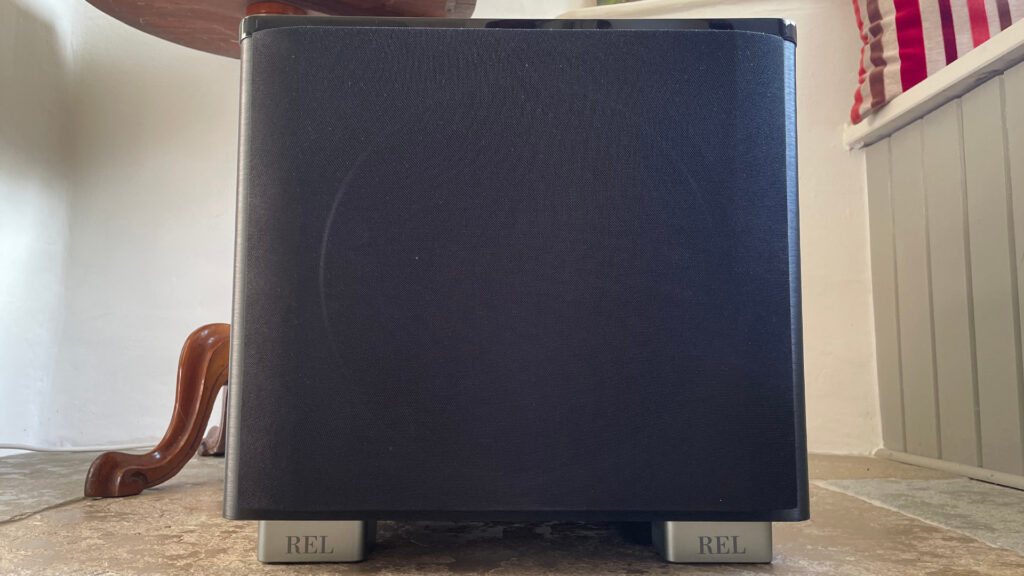 To cover or not to cover? It’s your choice

I love the depth that adding a sub-bass speaker brings to my passive stereo speakers. The effect its inclusion has on the other elements in the soundstage is uncanny, by seemingly making a system’s sound snap into focus. Adding a sub into a stereo setup doesn’t technically have any influence on the sound output of the main stereo speakers, but its presence certainly gives the impression of a more solid 3D image around vocalists and a greater sense of soundstage with my go-to tracks.

Streaming a 16-bit/44kHz.1 FLAC file of Dangerous by Big Data (feat. Joywave) is everything I hoped for. The raucous bass line is even more fun with REL’s powerful yet rhythmic output sounding confident and controlled despite the over energised low frequencies on the track.

It’s not just big bass beats that benefit from the potency the HT/1205 MKII can deliver, subtle vocals on The Ballad of the Runaway Horse by Jennifer Warnes or Teardrop by Newton Faulkner have a delicacy that helps both tracks breathe and brings a subtle sense of richness and warmth to their performance.

Connecting the REL to the subwoofer output of a BlueSound Pulse Soundbar+ also pays sonic dividends. The Bluesound is already a very capable soundbar with better low frequency handling than many similarly-priced soundbars I’ve experienced, but it still feels light when called upon to deliver high-octane bass effects and the addition of the REL beefs up the soundbar to full fat levels.

The soundtracks to Stranger Things and Euphoria are immense, and the impact the REL brings to TV and movie nights suddenly makes these shows even more enjoyable and immersive with powerful bass effects. Despite the abundance of power, though, the REL always feels controlled and doesn’t get overwhelmed with gratuitous bass effects, instead it stops and starts with expert precision. 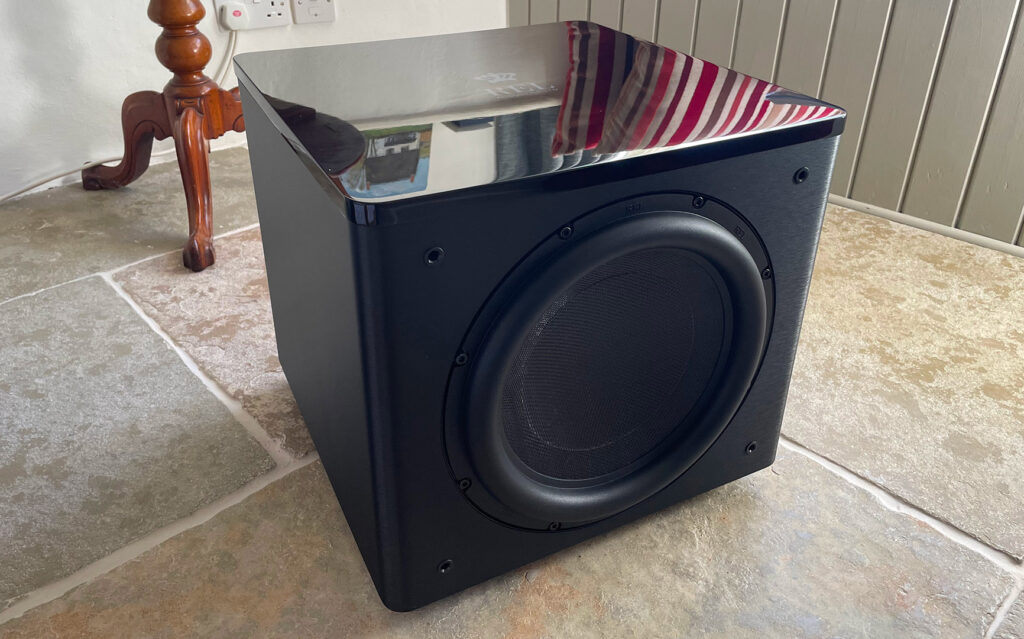 Sleek and solid, the REL HT/1205 MKII easily blends in to any environment

The power the REL Acoustics HT/1205 MKII brings to music and home entertainment systems is remarkable at the price. The 500W power output rating really does seem under-specified as this potent performer will easily drive medium-sized rooms without breaking a sweat, and there’s plenty in reserve to drive even larger rooms should circumstances require.

Its musical capabilities mean that it’s also a great hi-fi add-on. It can be driven via a pre output from a stereo amplifier, or partner a pair of active speakers such as KEF’s LS50 Wireless II speaker system where it makes a very agreeable and ultimately more affordable alternative to KEF’s system matching KC62 subwoofer, for example.

Get all our REL news and reviews