As our recent reviews have attested, quality hifi is no longer just a metaphor for industrially sized separates and traditional passive speakers. Often our real world homes and listening preferences mean our systems need to blend into our surroundings, rather than compete with them.

Some manufacturers get this more than others, which has had us cherry pick a system that minimises box count and shelf real estate without compromising on sound and features. Step forward Primare, with its solid reputation for style, quality and user experience in a typically Swedish understated way. 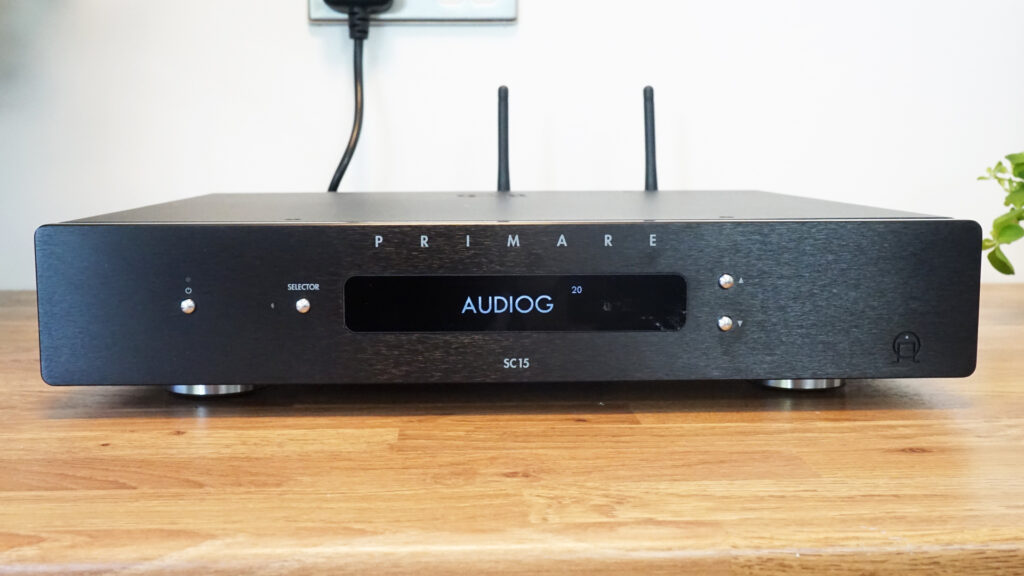 The SC15 Prisma preamp at the heart of our chosen package is drawn from the brand’s more compact cased 15 Series, which also includes a CD/network player at £1,650 and the I15 MK2 integrated amp/network player at £1,700. The SC15 is essentially the same as the latter model, but with its 60W Hypex internal power amp section removed and an AKM DAC chip in place of the integrated’s ESS flavour, bringing the price tag down to £1,450. 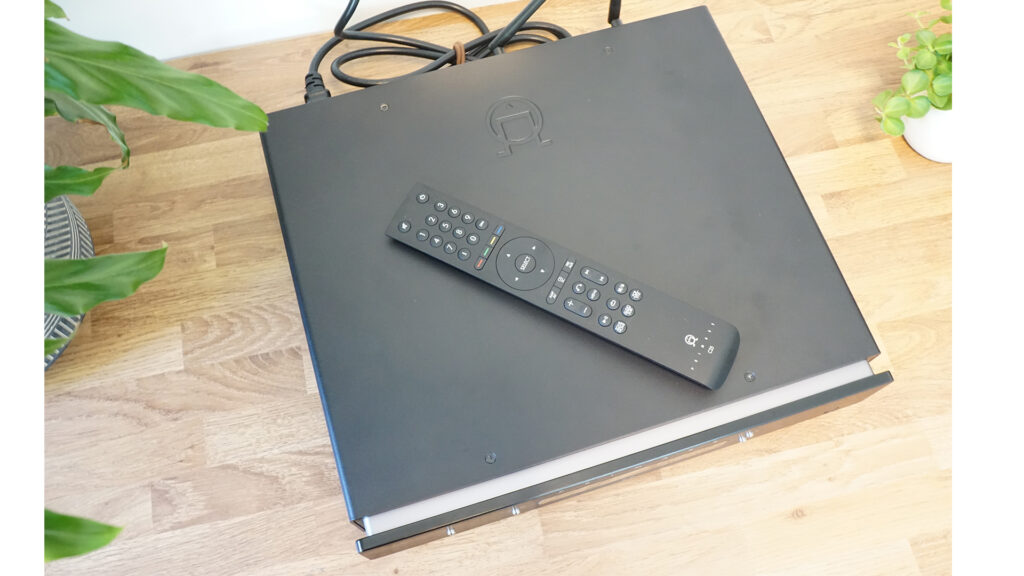 What you get is a unit built around Primare’s versatile Prisma streaming module that we reviewed in the NP5 Prisma Mk2 streamer last month, married to an AKM AK4490 DAC chip catering for data up to 32-bit/384kHz PCM on paper (although it can actually handle up to 768kHz) and DSD5.6/128 over USB-B with 192kHz and DSD128 over optical and USB-A.

Streaming provision is on hand for AirPlay 2, Chromecast, Spotify Connect, Tidal, Qobuz and Bluetooth. Crucially, a WiSa wifi transmitter is also part of the package, allowing the unit to link up with other WiSa equipped kit over wifi, including speakers, eradicating the need for speaker cables. Analogue inputs and outputs are line-level only (via RCAs), but at this price it’s fair to not expect balanced connections, which also frees up rear panel space demands, helping keep the unit compact.

A remote control is part of the package although with Primare’s Prisma app calling the shots, it’s more likely to be a back up option than your go to means of operation. 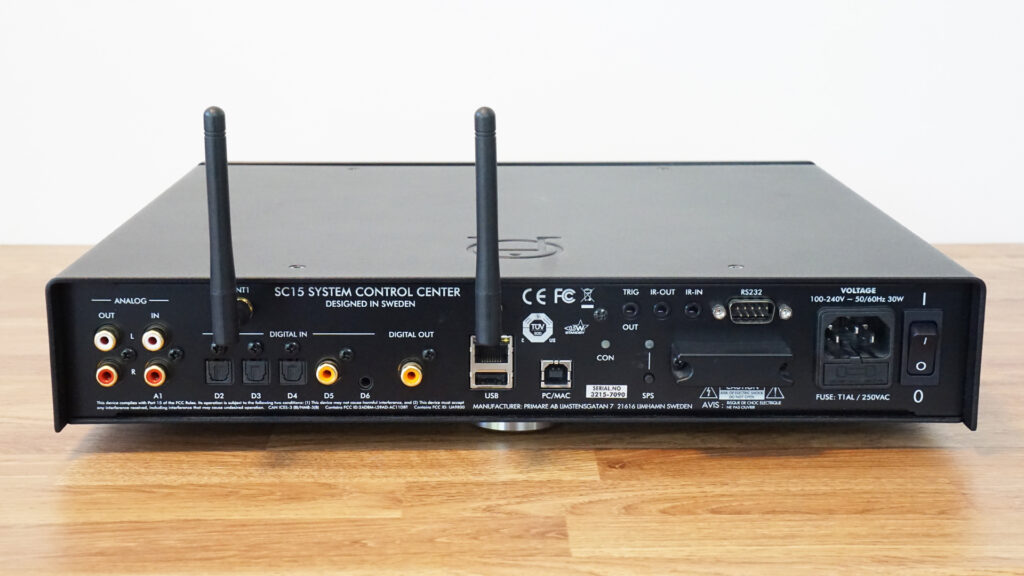 Inputs include a pair of analogue RCAs, four optical (one shared as a 3.5mm analogue), one coaxial, USB-A/B and ethernet plus Bluetooth and wifi antennas. Outputs are limited to a digital coaxial socket and single set of analogue RCAs. Note the WiSa module and pairing button to the left of the mains input.

The only way is up?

Being able to run the SC15 in variable or fixed output mode means its ripe for preamp duties and continuing the minimalist theme, active speakers are its ideal lifestyle partners as built in power amps means less boxes, while also ensuring their drive units are being controlled exactly as their manufacturer intended.

Hailing from Roskilde in Denmark, System Audio speakers are ideal Nordic bedfellows for Primare, offering a range of award-winning active and wireless models. The SA Legend 7.2 Silverback may sound like a 23rd Century Grand National winner, but it’s actually an active version of the standard Legend 7.2 with an internal WiSa receiver and a trio of combined DSP/DAC amps, which SA refers to as ‘power DACS’, delivering a combined 225W.

The speakers’ twin 5.5in (140mm) mid/bass units are formed from carbon fibre membranes while the accompanying 1in (25mm) tweeter is a soft dome type, that’s recessed within a chamfered DXT acoustic lens to provide more even high frequency distribution across a listening environment. 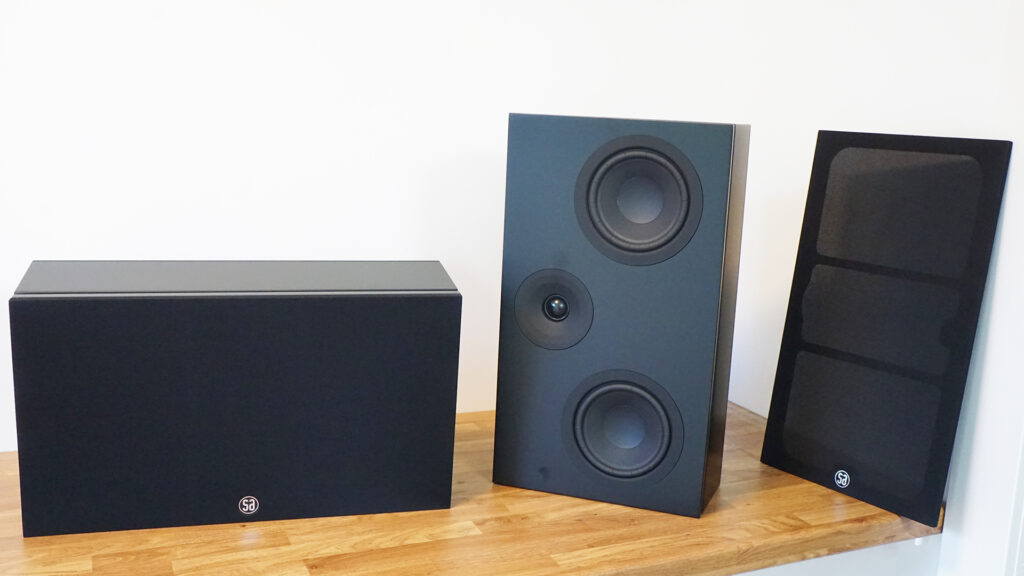 Versatility is the name of the Legend’s game, as they can be mounted vertically or horizontally on walls, shelves or even ceilings, with alternate grilles included to match

What these speakers major on is user flexibility, with recessed wall mounts built into their rear panels and two sets of grilles included should you want to mount them ‘landscape’ or ‘portrait’ orientation, meaning their all important logos will be the right way up.

While we opted for a two of these speakers to configure them in stereo mode, as the 7.2 moniker suggests, you can also add more and configure them all the way up to a 7.1 home theatre set-up. Supplied individually, each speaker costs £1,700, giving the system an overall price tag of £4,850.

Although their cabinets aren’t perhaps the most stylish looking in the window, they’re solidly made from 25mm MDF sections for their front and rear panels with 18mm MDF for their surrounding surfaces. They’re also chamfered, with the back panel being slightly larger than the front, making them appear smaller than their 47 x 27 x 16cm dimensions (WHD) would suggest. 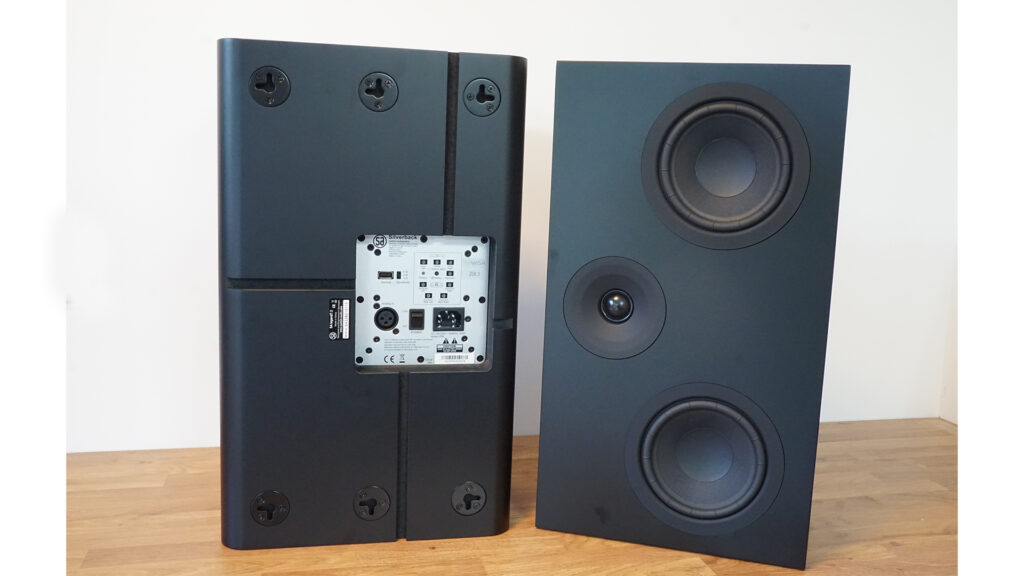 Sturdy recessed rear brackets highlight a range of mounting options, with cable channels for every option

With two different brands’ kit and a set up that’s mostly virtual, my fears for hours of head scratching and being bewildered in configuration apps are quickly dashed as getting the system up and running is thankfully easy. Starting with the Primare, you select either cable (as I did) or wifi from the front panel intro screen, with the latter just requiring you to use the Google Home app initially to get the Primare onto your local network, before the Prisma app sees it. Hardwired via ethernet is even simpler, as Primare’s Prisma app finds the unit automatically.

And what an app this is. Compared to Primare’s apps of old, the Prisma feels so next century. Syncing to your streaming accounts is a doddle with further settings for naming inputs, auto volume levels and front panel brightness controls should you wish to customise to your heart’s desire. 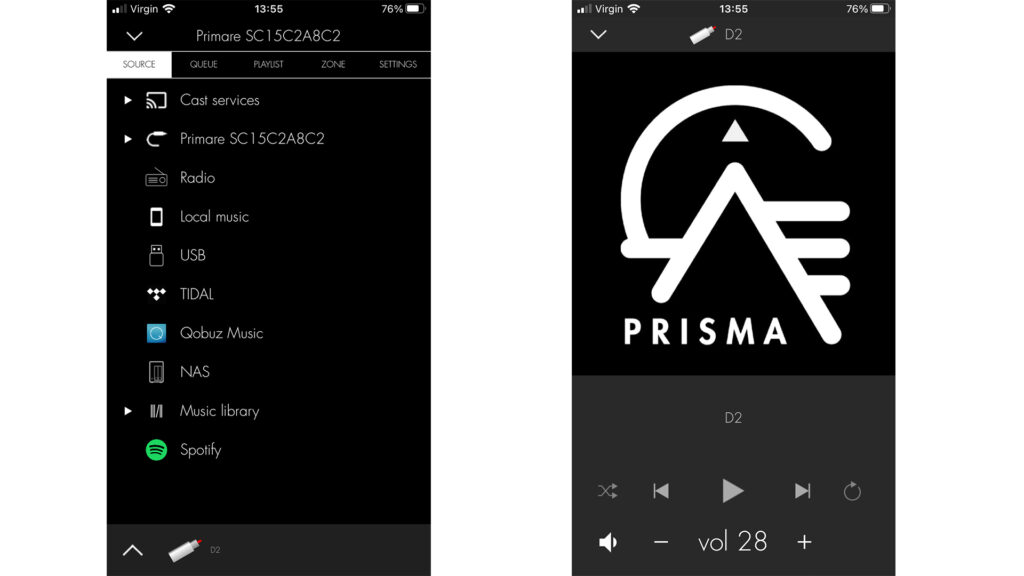 The SA speakers also have their own app (SA Cockpit), which offers configuration and tuning options although it’s not essential to get them working. Simply power them up and use the back panel button to select each one’s position within a stereo or surround setup and hold for pairing. Now hit the pairing button on the back of the Primare and bingo, the SC15’s front screen confirms connection and you’re good to go.

To save drilling my freshly plastered 7x4m listening room, I mounted the speakers on stands with their rear panels flush to the wall, positioned horizontally, 1.8m apart and firing down the longer axis. 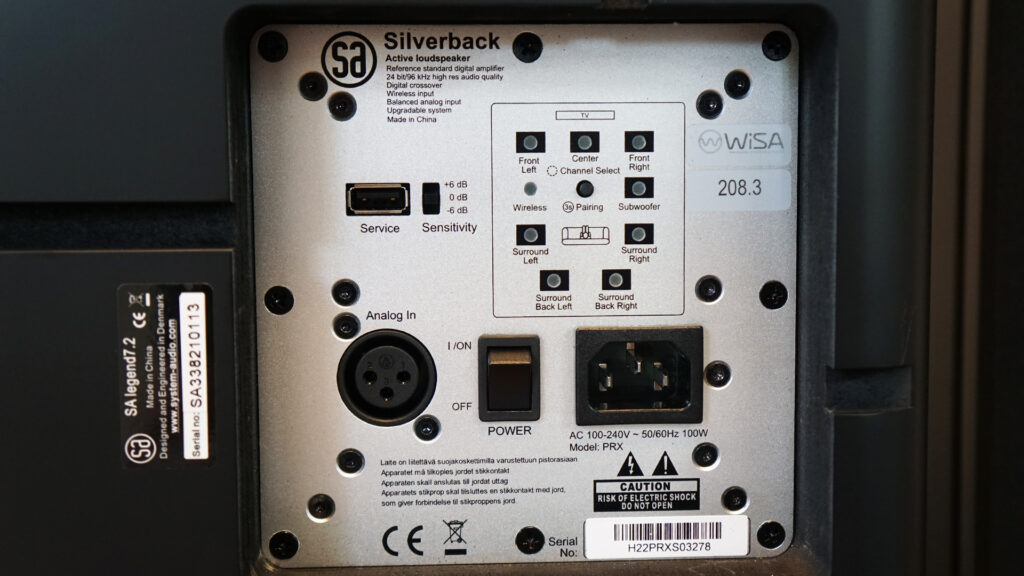 It’s clear from the opening bars of Elton John’s Rocket Man streamed over Tidal at 16-bit/44kHz that this system’s size doesn’t hold back its sonics. The scale of the music and the soundstage the SA speakers can conjure immediately dispels any preconceptions of these being mere satellite boxes. The bass delivery is exceptional for a speaker of this size, denoted by how the walking bass guitar hits its stride as the chorus kicks in, showing they have no issues not only extending down to their claimed 35Hz (at +/-1.5dB) but also ensuring the lower frequencies they generate are presented with more weight and presence than their modest drivers and cabinets would suggest.

Tweaking the speakers’ sensitivity options gives you further options. In my listening room, the rear sensitivity setting at 0dB provides the best balance with -6dB making the low end a bit too prominent in the soundstage and +6dB a little too lean.

Playing to the current musical zeitgeist with a 24-bit/44kHz remaster of Kate Bush’s Running Up That Hill (A Deal With God) via Qobuz highlights how this song should be heard, in contrast to the amount of airplay it is currently getting via every teenager’s smartphone with a Netflix account.

The Primare and SA combination’s synergy really comes to the fore, capturing the percussion’s timing with vanishingly low levels of overhang, despite the intentionally echoey nature of how the drums are recorded. What this system also demonstrates with this track is the depth of soundstage it can muster, with the percussion pounding from way behind my wall, like it’s in another dimension.

While this is a largely digitally based system, its musical character is richly analogue with a warmth to the music that’s almost vinyl like. With Nick Drake’s Three Hours from his Five Leaves Left album streamed via Qobuz at 24/96 PCM, little is lost in its atmospherics in comparison to how I’m used to hearing this via my VPI vinyl front end. The guitar work is thick with detail, affording me a window into how it’s played, not just the resulting sound. Each drawn out guitar string stretch as Drake plucks harder for emphasis it effortlessly laid forth, while sibilance is kept well at bay during the passages that typically invite it. Overall, the impression is that of a convincingly natural sounding recreation of the original, not an inferior digital interpretation.

What this system highlights is how hifi’s boundaries have rightly evolved to meet real world needs. When combined, Primare’s SC15 front end and SA’s Silverback speakers will easily give traditional two channel systems at a similar price point a run for their money in terms of sonics and usability, because the underpinning quality of both products hasn’t been compromised.

Leave your preconceptions at the door, as the Primare and SA combination warrants your attention should you be in the market for a flexible solution without the big box count.

Consider… SA speakers aesthetics are a little functional, so pick a finish that's not black

Get all our Primare & SA news and reviews