So when we were invited to experience Wilson Audio’s newly released Alexia V in all their Spearmint coloured gleaming glory (other colours are available), we didn’t need to be asked twice. 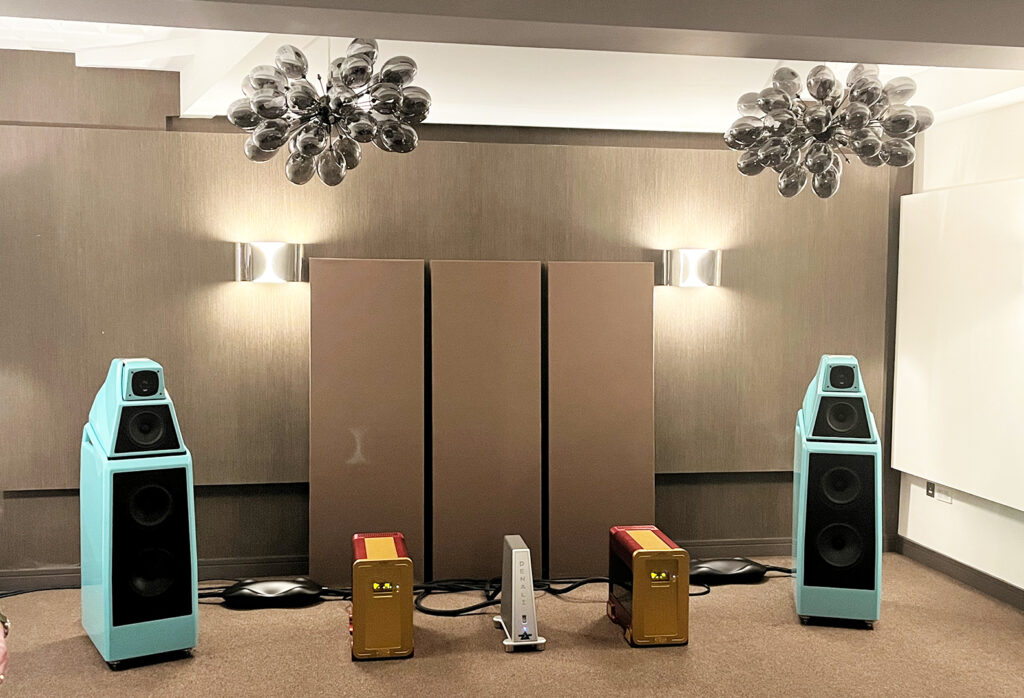 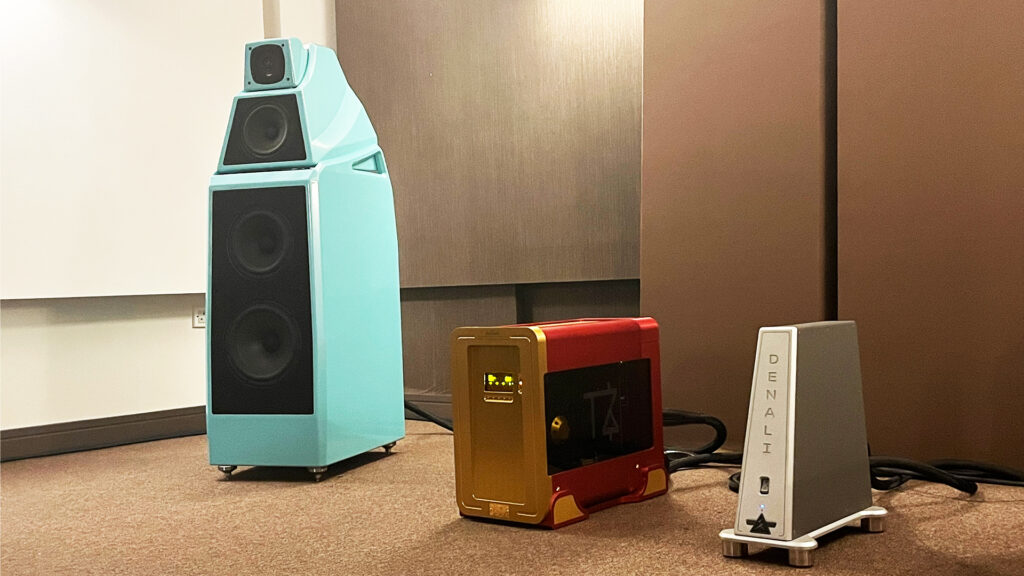 Alexia V’s handcrafted enclosures are formed from Wilson’s latest versions of X, S and V-Material, made up of carbon fibre, aerospace grade aluminium and stainless steel plus gold connections throughout the entire signal path

The Alexia V is the latest brainchild from Daryl Wilson, son of company founder the late David Wilson.

Since taking the reins, Daryl has maintained the company’s DNA while pushing its product portfolio to the next level and into the modern age, with a raft of stereo speakers and more recently subwoofers, to meet the needs of today’s audio connoisseurs. 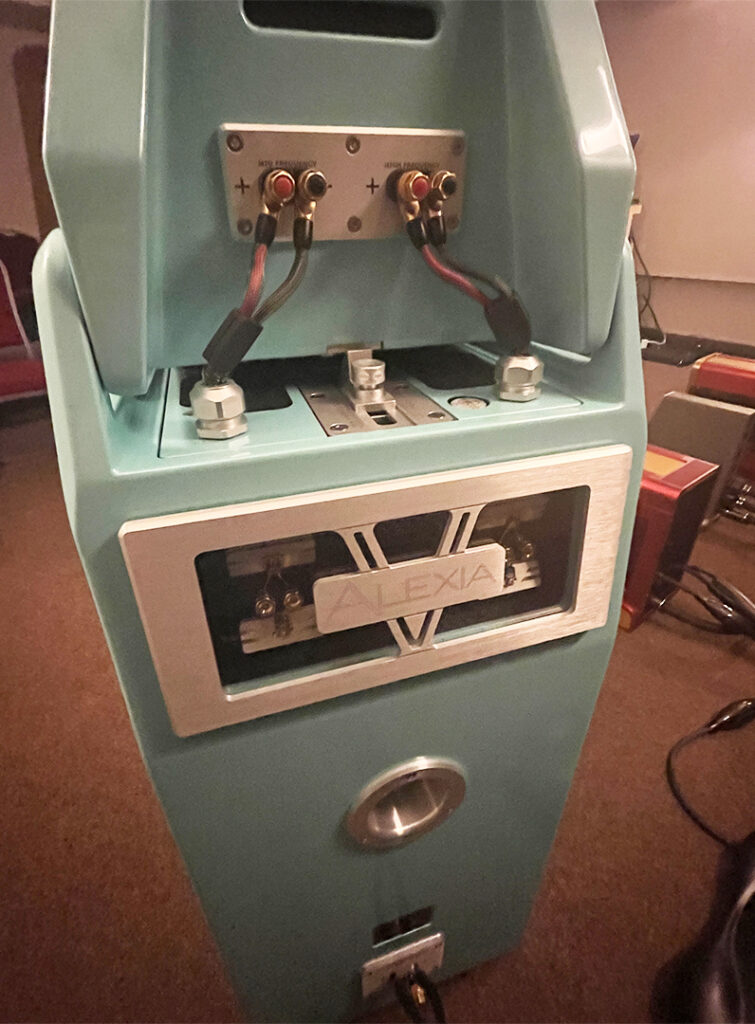 Rear panel connections and adjusters are first class, as you’d expect on a speaker this refined

At around 40 x 60 x 130cm (width/depth/height) the Alexia V’s footprint won’t overwhelm most UK homes and at 120kg, they’ll be stay put once in place.

A four driver design, their 1″ tweeter sits within its own enclosure that offers fine adjustment, for optimal time and phase alignment. 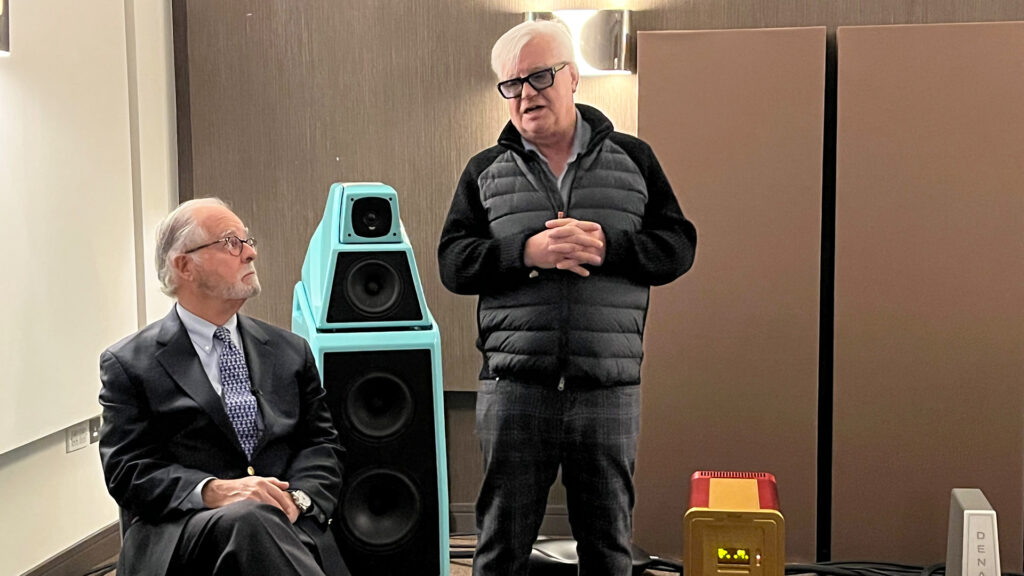 The 7″ QuadraMag midrange driver also gets its own adjustable enclosure and is based on the WAMM Master Chronosonic with added refinements. Eight and 10″ bass drivers complete the lineup, enclosed in the lower cabinet which also sports an improved woofer port with increased air flow. 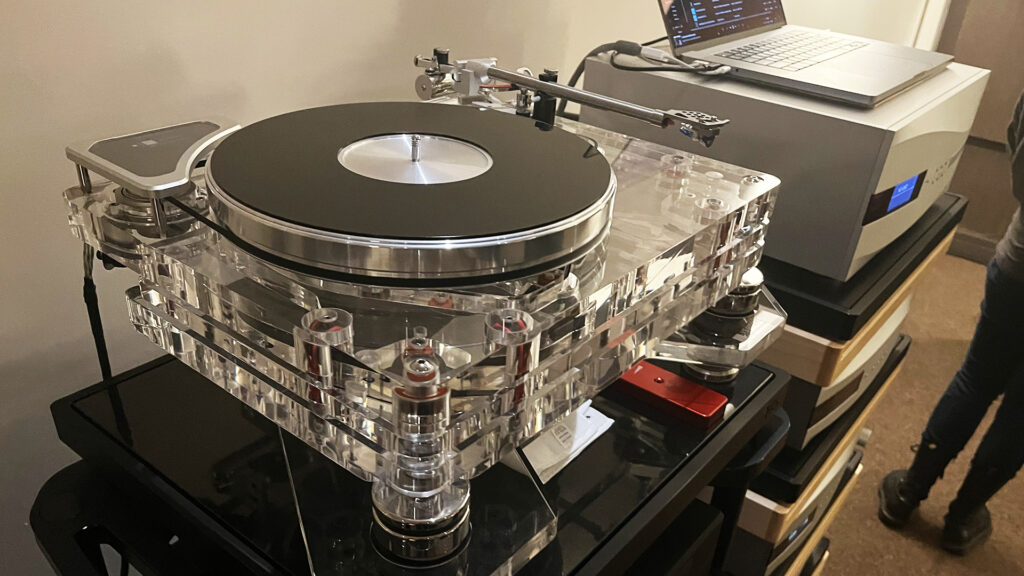 Vertere’s RG-1 turntable sounded as transparent as it looks during the listening session, while on digital duties was a full dCS Vivaldi stack with sonics to die for

The Alexia V’s low end improvements were borne out across a range of music on demo, from solo piano to fast paced flamenco and everything in between.

The way the Wilsons rendered the sinister bass line on Free’s Free Me had the authority and scale of rolling thunder, contrasted with the agile notes of Kham Meslien’s double bass mastery on Ta confiance that followed, which were imaged with arresting realism with a truly beguiling texture. 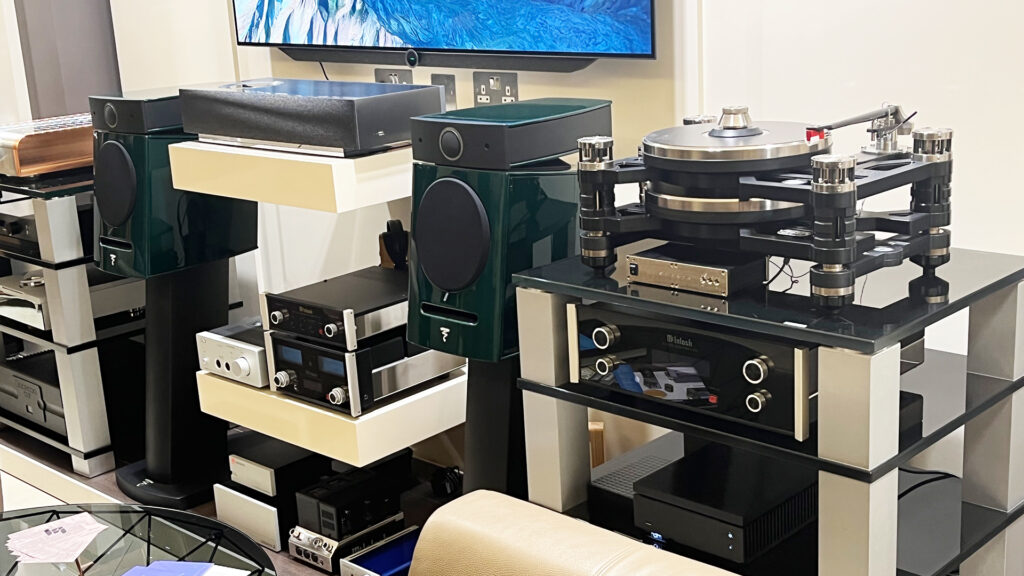 KJ West One offers some of the finest hifi available in the UK, including from Audio Research, Dan D’Agostino, Focal, Kronos, McIntosh, and other leading brands to name but a few

We were also treated to an array of live recordings spanning Peter McGrath’s recording career, which gave a unique window into the passion that he brings to the art of music and how Wilson’s products have been refined to recreate these experiences in such accurate detail, right down to the angle of the kick drum on stage and width of the piano being recording.

Few manufacturers can call upon this level of insight when bridging the gap between the live experience and what we hear in our living rooms. 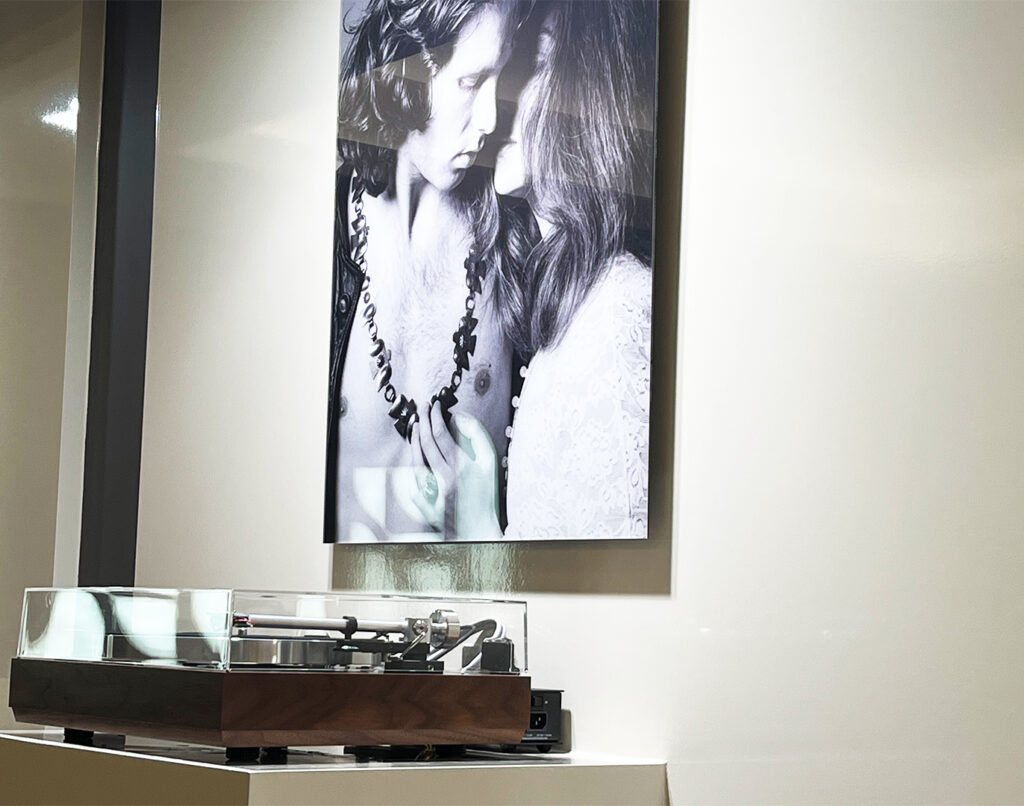 A genuine thanks to Peter, Ricardo and the KJ West One team for hosting us and demonstrating what must be one of the finest sounding systems in the UK today. 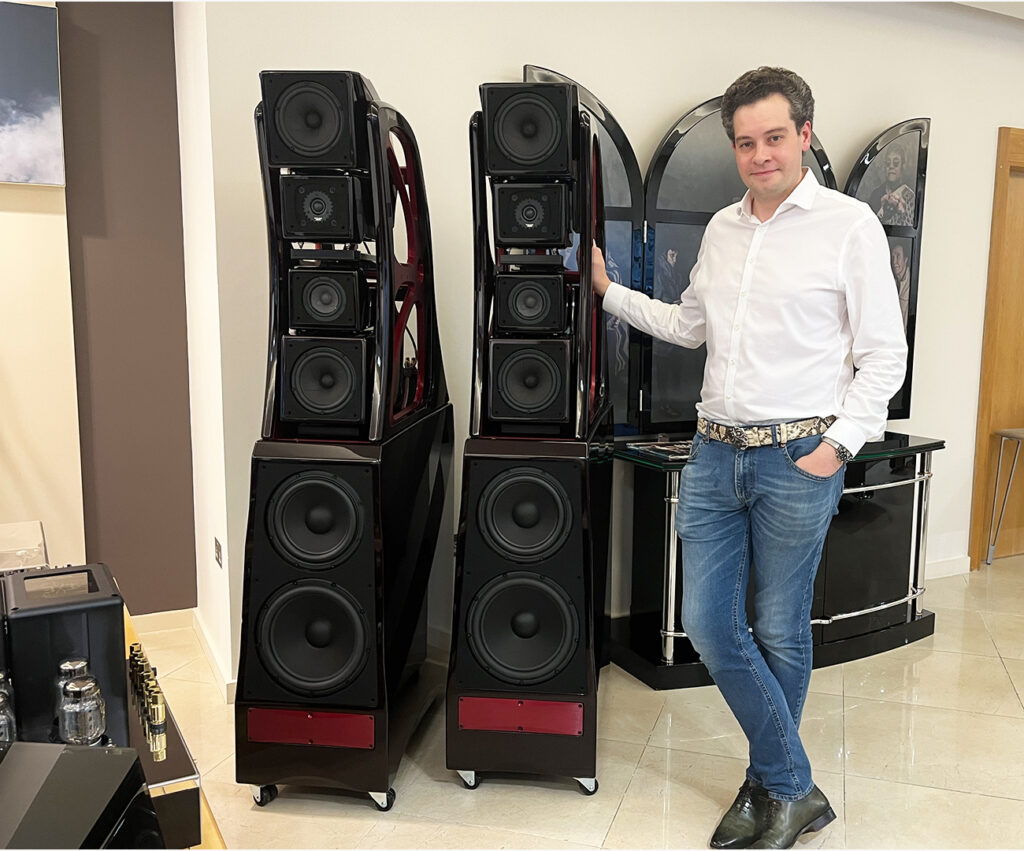 Being the only pair of the uncompromising Wilson Chronosonic XVX floorstanding speakers in the country, you can see why KJ West One’s Jason Ford guards them closely

Visit wilsonaudio.com to find out more about the Alexia V speaker and its other ranges.

Get all our Wilson Audio news and reviews