Back when vinyl was king a built-in phono stage was all part of your average integrated amp’s offer, so much so they were taken as a given on the spec sheet. Then when CD ruled the roost and vinyl’s demand waned, many amp manufacturers dropped this feature, as buyers mainly needed line-level inputs, for CD, radio and the like.

The turn of the millennium saw vinyl’s comeback begin and the birth of the budget standalone phono stage, as an add-on to the amps of the day that were caught lacking them. Having heard and tested many entry level phono stages from this era, in truth most were little better than the standard inclusions that came fitted to integrated amps a decade earlier, but they at least gave vinyl newbies a way in.

These days we can expect much more from the humble entry level phono stage, with dedicated specialist manufacturers like Graham Slee showing that for a few quid extra, a standalone is a worthwhile investment. And when you consider its job, it’s easy to see why, as these little units are their own preamps, designed to boost extremely low-level cartridge signals before handing over to your main amplifier.

Fast forward to today and iFi Audio is well established as a market leader for great value and spec laden desktop and portable audio, plus a range of accessories. With an almost dizzying churn of latest products, it’s a wonder iFi’s boffins have time to sleep.

The ZEN Air Phono model is the cheapest phono stage iFi offers costing less than a hundred quid, as part of iFi’s great value ZEN Air range. Despite the low price, iFi has managed to pack in a range of quality components aligned to a sensible feature set, with a custom OV Series op-amplifier and TDK Class 1 ceramic capacitors, alongside ECPU types from Panasonic. 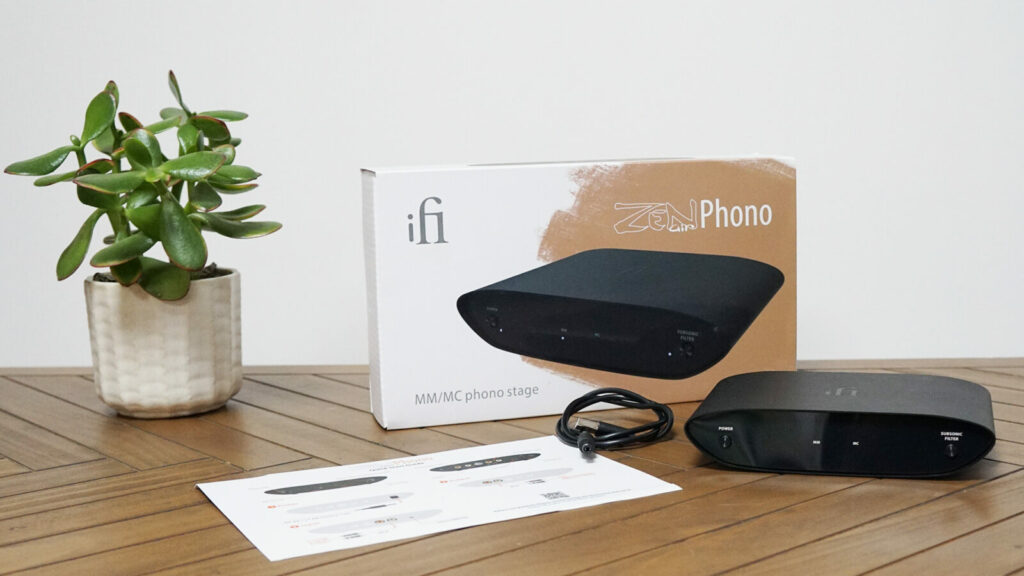 Spec wise, for an entry level phono stage the ZEN Air ticks the boxes you’d expect and then some, catering for both moving-magnet (MM) and moving-coil (MC) cartridge types up to 2mV output. At this price most phono stages tend to be MM only, giving the Air an edge right from the get go. 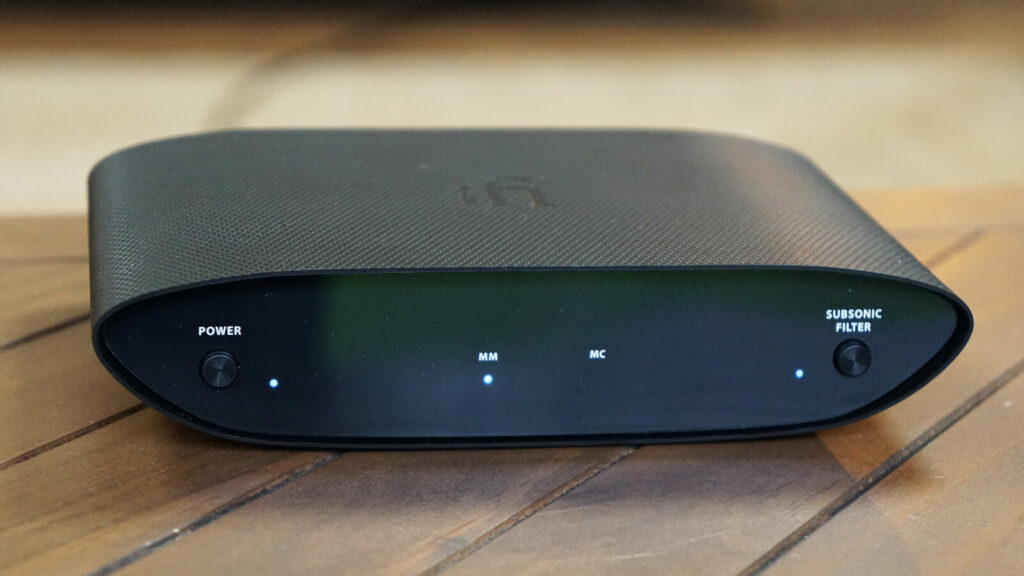 It also features a switchable subsonic filter that’s designed to identify and remove the audio effects generated by cartridges tracking warped vinyl pressings. On many a cheap phono stage, these rumble filters can act as a blunt tool, filtering out low frequency music at the same time, making them both a blessing and a curse. Thankfully iFi gets this, and the Air’s filter is designed to remove rumble only, leaving the musical low frequencies alone to do their thing.

The whole unit comes housed in a plastic polycarbonite case which feels light yet solid with a nicely textured finish and small grippy domed rubber feet.

Set-up could not be easier, with font panel buttons for power and its subsonic filter, alongside LED lights denoting which cartridge type is selected. While a mains cable is included there’s no plug, but with its USB-A socket and 5V DC input, most phone charger plugs can provide the right amount of juice, including those from Apple and Amazon.

The standard ZEN Phono may be twice the price of the Air model, but it’s still great value at a shade under £200, which is less than a midrange interconnect cable. Unboxing it reveals an almost identically sized unit, formed from better quality materials. The first thing you notice is the ZEN’s improved casework, with a brushed alloy front panel and metal carcass that feels better built, right down to the hefty bolts securing its rear panel. 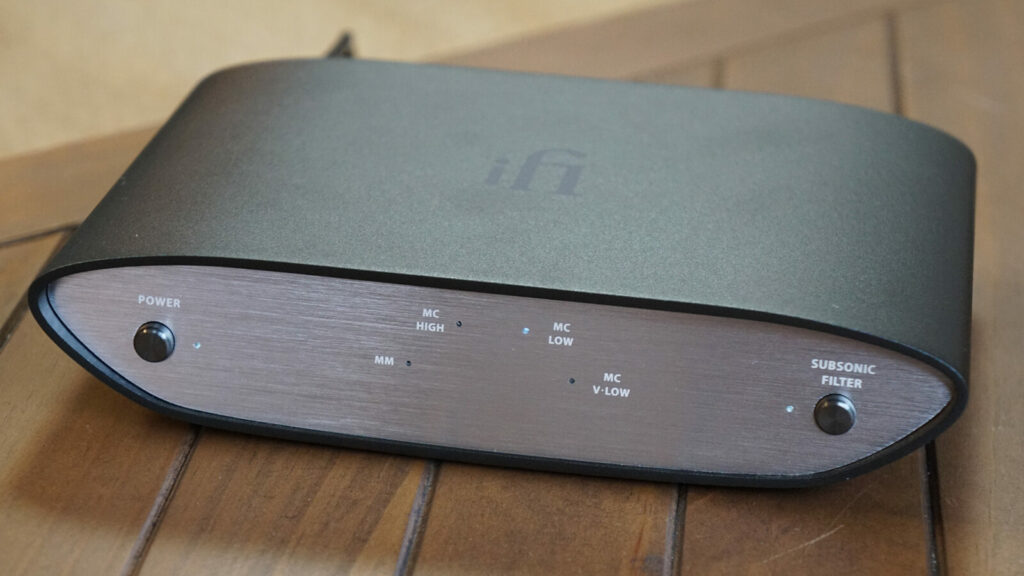 Brushed aluminium is the order of the day with the ZEN Phono, showing where your extra cash has gone, with LED lights for four cartridge settings

Under the hood the ZEN’s upgrades continue, with noise filtration in its power supply, fed via a supplied 12V wall-wart and an EQ circuit using multiple TDK C0G capacitors in parallel.

Its internal circuitry employs an OVA2637 op-amp and is also balanced, which is rarely seen at this price point. Users can take advantage of this via the Pentaconn type 4.4mm balanced output socket on its rear panel, although you’ll need a suitable cable, such as iFi’s own 4.4 to twin XLR offering. (Let’s also not forget iFi Audio is the sister company of AMR Audio, which makes some of the most cutting edge hifi available, giving iFi an impressive pedigree to call upon.) 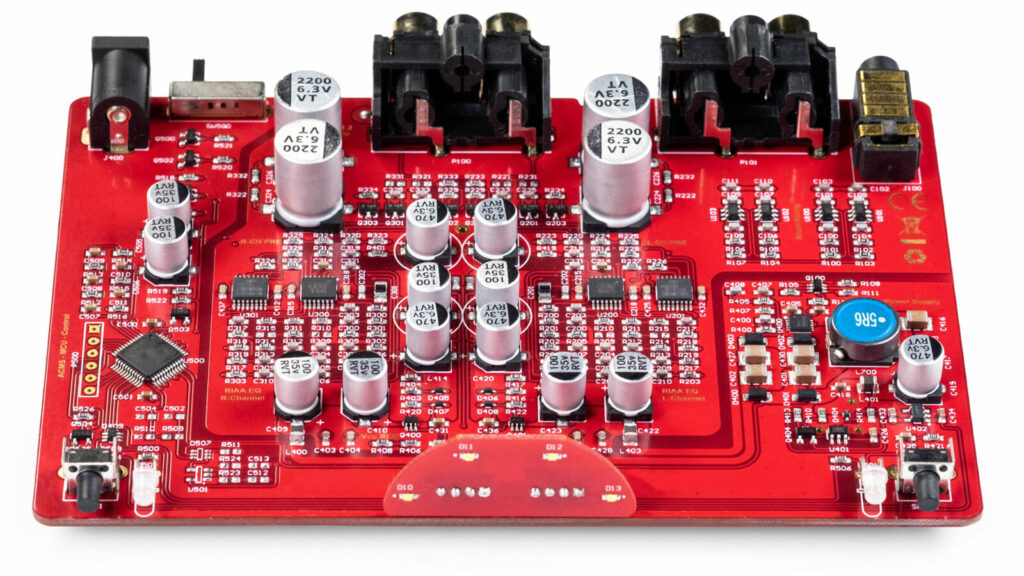 The ZEN Phono board benefits from trickle-down tech inherited via its AMR PH-77 and iFi iPhono siblings, with custom op-amps and components from TDK, muRata, Texas Instruments and Panasonic

Alongside the same subsonic filtering as the Air Phono, the standard ZEN gets four gain settings to cater for MM pick-ups plus high, low and very low output MCs with gain ranging from 36-72dB to serve cartridges down to a lowly 0.25mV output, like Denon’s venerable DL-103 range.

Like its Air sibling, set up is easy thanks to the supplied bookmark type guide. The package also incudes a set of iFi branded RCA cables to get you started, alongside the plug-in PSU. 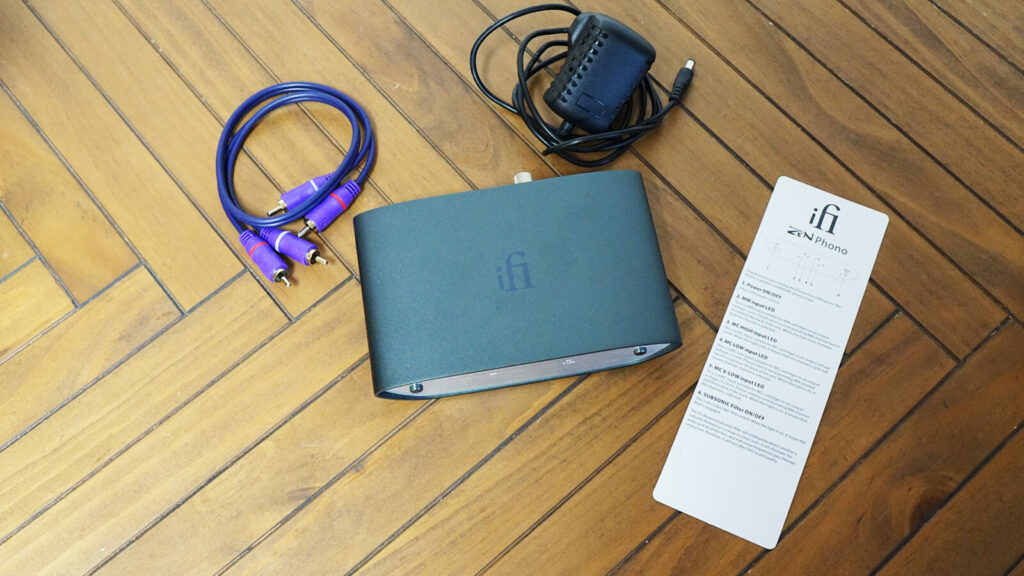 iFi ZEN Phono comes complete with everything you need to get you going. Simple user guide is a breath of fresh air compared to many rivals’ War and Peace style manuals

Kicking off with a Sundazed pressing of Simon and Garfunkel’s Bridge Over Troubled Water, the track El Condor Pasa has more detail than I’d expect to hear from a phono stage in this price bracket. Instruments are realistically defined with good levels of separation, while the flutes’ high notes are projected well without sounding harsh or thin. Timing is also nicely controlled, with the following track Cecilia having plenty of punch and pace to get my feet tapping.

Perhaps the Air’s most standout attribute is its midrange and treble articulation, as vocals have a fluidity to them that’s frankly lacking in most entry level phono stages, which can often sound a little forced and artificial in this regard.

At the other end of the scale, the Air packs impressive levels of bass and dynamic range for its price and spinning Goldfrapp’s Thea from their Tales Of  Us LP shows the Air isn’t afraid to make the most of its 20Hz-20kHz frequency response. The pounding bass has enough presence to be felt as well as heard, with enough body and weight to do the far more costly VPI package justice.

Swapping out the Benz for a Denon DL-103R MC pick-up shows the Air’s MC input to be more than adequate, but it’s not ideally suited to cartridges with such vanishingly low signals and Denon’s DL-110 would probably make a more suitable pairing with its 1.6mV output (instead of 0.25mV).

Experimenting with the Air’s subsonic filter reveals its engineering to be as iFi’s marketing blurb claims. With my LPs in good order and firmly clamped down there is little warping to filter, and engaging the filter makes little (if any) audible difference which is exactly as it should be, leaving the rich low frequencies to flow uninterrupted as they get the Dynaudios’ twin mid/bass drivers shifting plenty of air.

Re-running the musical fun reveals the standard ZEN model to be a more refined musical performer. On the Goldfrapp material channel separation sounds better defined, which generates a wider and more articulated soundstage for the instruments to occupy. It’s also slightly smoother sounding than the Air, with a maturity that puts the ZEN in a league of phono stages costing double and more. Hearing how it lets Alison Goldfrapp’s vocals loop around my listening room is a joyous experience, that demonstrates the ZEN’s impressive bandwidth at work, as her vocals swoop and soar.

What’s also notable with the standard ZEN model is its low noise floor. Given the year and recording techniques at the time of the Simon and Garfunkel record, elements of background noise have inevitably crept in, but what you notice with the ZEN compared to its cheaper brother is that these elements are less of a distraction, allowing the quieter passages to be more impactful with richer, inkier darkness between the musical notes. It’s on this album that the ZEN really excels with a more even handed delivery than its Air sibling, with a greater sense of balance and control. Strings and wind instruments on El Condor Pasa for example are that bit better defined in their strokes and air movement, giving you a little more insight into how they are being played, not just their resulting sound.

Switching up to the Denon DL-103R cartridge also confirms my suspicions, as while it sounded more than adequate via the Air model, via the standard ZEN there’s much more dynamism, detail and authority at play, especially in the bass regions, which highlights how, with the right phono stage, the Denon is still a match for many a modern cartridge, despite its longstanding design.

It’s not easy for any hifi brand to really nail the budget phono stage design challenge given the compromises at stake. For a brand to do so, and so well, with two designs deserves genuine applause. And this is because neither are budget sounding, with price tags well below their performance envelope.

If you’re after a phono stage to get you going, perhaps alongside your first starter deck then the Zen Air Phono is for you, and the money you save can be put towards a better cartridge or deck. But if you’re starting to see vinyl as a mainstay music medium and are starting to get a cartridge swap itch that needs regular scratching, then save yourself the hassle later on and buy the ZEN Phono now. It’s better built, with more options and improved sonics, although both units are outright Billy bargains. 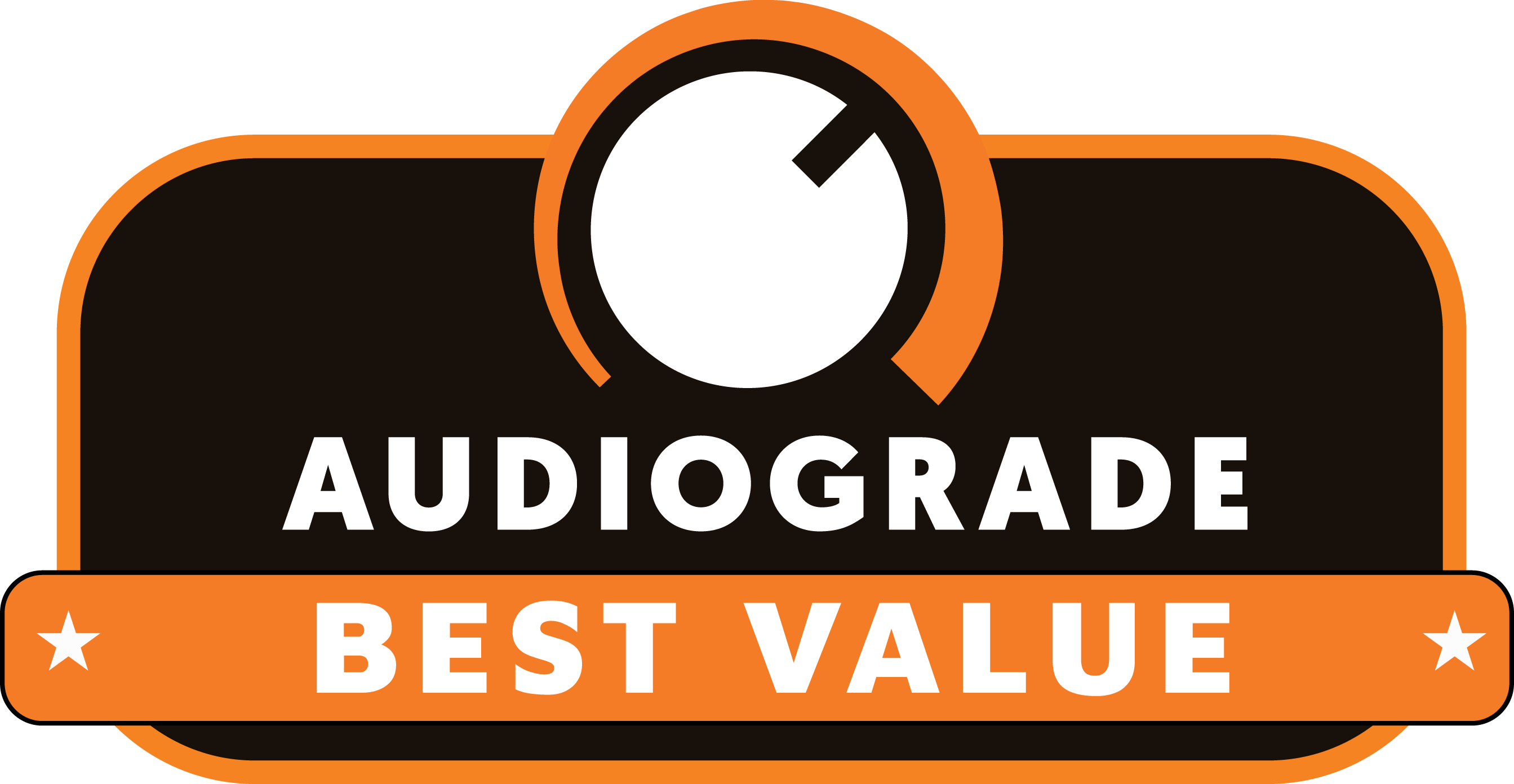 Ideal for… While the Air is ideal for vinyl newbies , the standard ZEN is a step up and makes a great case as an upgrade to legacy entry-level phono stages

Consider… Which one is right for you. The Air is bargain at the price but the standard ZEN may make for a better choice longer term

Get all our iFi news and reviews